I discovered Paola Bennet‘s music about three years ago. I was impressed by many of her songs, covers and originals, but it was actually her very original interpretation of Natalia Kills’ “Problem,” a song that she made her own musically, that hooked me on her music. When I started this Blog, Paola was on my list of amazing artists I wanted to tell the world about – yes, I made a list, and I’ve reviewed about 75% of the artists on that list so far – so when I noticed she had released The Shoebox EP, I reached out to her to offer to review it.

That voice. That hauntingly angelic voice. It conveys so much emotion – such a broad, nuanced range of emotion – all while seeming wispy and thin, yet subtly rich and full of power. Fragile power. 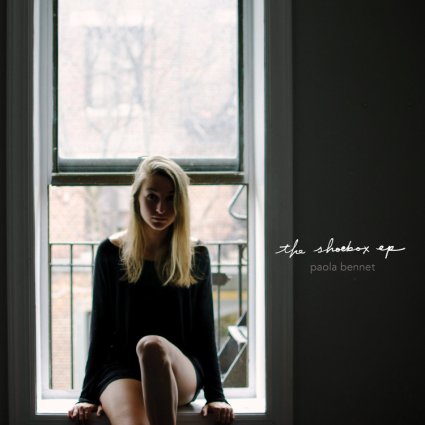 The music is rather ethereal but more directionally focused that most other music that’s so light and airy, with a soft guitar unobtrusively but very clearly driving the songs along their prescribed routes, beginning to end. And Paola’s voice, while it seems so often that she’s speaking softly, almost whispering in your ear, is firmer than other such soft vocals and shows strength and power when required. Indeed, when describing why Paola Bennet stands out as being exceptional compared to similar artists, it’s these ways in which she’s uniquely “more” that are surely the answer.

“Antidote” opens the album with Paola’s strength, that softly spoken, emotive vocal combining with lightly plucked guitar, as the song slowly builds. The seeming softness of the vocal causes the listener to lean into the song, paying attention to the details, the moaning guitar augmenting the plucked rhythm, the precise, slightly layered vocals building through the verses to the chorus. And the payoff lyric: “I am the poison/Where is my antidote.” It’s a pleasantly structured song, one that quickly grows into a favorite, but the key is always Paola’s voice, simultaneously familiar yet spectacularly unique. Because of “Antidote”‘s many special musical and songwriting elements and the way it truly features Paola’s voice, this is most often my favorite song on this disc, but that designation changes among these songs from day to day, as all four of the EP’s tracks grace my selective personal playlist. 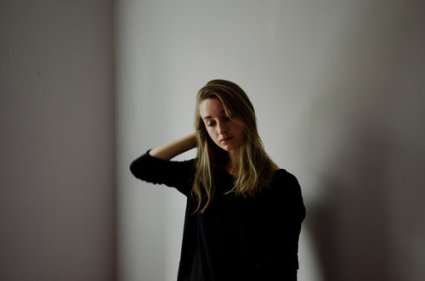 “Who I Can’t Have” follows, again beginning as if Paola is sharing a secret, just between friends. As it builds, this track develops into something a bit more likely to find a home commercially. It’s songs like this that make me wish there were a larger-audience commercial outlet for music whose tempo is this slow, with rich strings adding a warmth to the song, perhaps turning the song from sad to melancholy as a result. It’s a perfect song for a playlist, though, to share with friends who’ll marvel at how a wonderful song like this hasn’t already become an everyday music staple. And it’s ideal for a live performance. The sort of song that’s likely to make a large room feel intimate. Actually, though, that’s true of everything Paola performs. With songs like this, the best recommendation is to “just give it a listen” and allow the song to win over receptive ears. For new potential fans, this may be the best introductory song among The Shoebox EP‘s four. 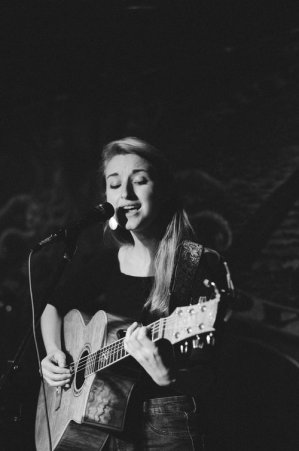 “September” is another of those tunes in which the singer seems to be sharing an intimate secret, directed primarily to the object of her emotional anguish, penned therefore in the way one might write a diary entry. The supplemental “there’s always one” vocal line is an important element in the build to finish, though my favorite lyric in this track comes in the chorus, “Darling, you’re an open wound.”

“Morning” is an ideal closing track to this all-too-short four-song collection, and it always makes me question if I’m really right about which song is the best introduction to Paola Bennet. There’s more breathiness in Paola’s vocals in this track than in the others, and perhaps in some ways a broader appeal, though I’ll still stand by “Who I Can’t Have” as featuring more of the elements of Paola’s voice that showcase how she’s uniquely different from other singers. Still, “Morning” is another very special tune. It starts off subtly, slowly builds, and then fades. From a song-order perspective, I love when the last song fades like this; it feels like the end of a collection.

In all, four songs seem too few when they’re this good, but all four on The Shoebox EP are so exceptional that they’re all now part of my personal playlist, the rather select group of songs I carry with me everywhere I go. There’s nary a weak link on this EP, so I truly have no complaints. Nor will you have any complaints if you give Paola’s music a listen. She’s a talented singer-songwriter-guitarist with a subtly original voice through which she’s uniquely able to connect to listeners via very personal songs. I’d suggest there’s room for this music in almost anyone’s collection, regardless of your primary musical taste.

Though her third EP overall, The Shoebox EP is Paola’s first studio release, and I hope it’s the first of many. She’s a New York-based artist, but I’ll be watching her Facebook page and the “shows” section of her website hoping she’ll perform in Boston sometime soon. New Yorkers, however, needn’t wait long to catch a live gig. Paola is performing Saturday night, September 9th, at Kitty Kiernans in Brooklyn. (Free admission, even, so go. Enjoy. Thank me later.)