The Golden Hour kicks off with “Sunset (Intro),” a piano intro that leads into a rich, lush, slow, Moody Blues-esque crooner, “Sleep.”

Fernando then picks up the tempo with “Spotlight Smile,” a familiarly comfortable, totally laid-back yet energetic ’70s guitar pop-rock-ish number, something well-suited to a concert on the beach. Perhaps the beach shown on the album cover. 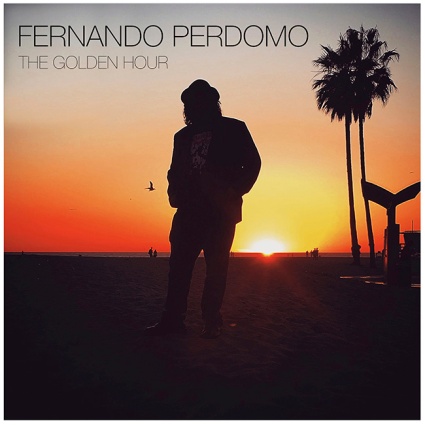 Indeed, beaches, palm trees, and sunsets seem to be the perfect backdrop for most of The Golden Hour‘s songs. The next track, “Look At the Moon,” deploys some mild guitar hooks a bit reminiscent of Cheap Trick. Mellow Cheap Trick.

“Here With Me” is a nice ballad, its guitar hinting at a Hawaiian twang. “Sunset,” meanwhile, opens with a guitar sound and vocal intro relatively akin to Pink Floyd. The mellowest Pink Floyd you’ve ever heard.

“Love Loss Repeat” is one of my favorite songs on the album, lyrically a clever thought, with standard mid-tempo drumming, mellowly powerful melodic rises and falls, and interesting supplemental harmonies. Perhaps my very favorite is “I Feel (Therefore I Am),” with an interesting, classic guitar line, mid-tempo rock with a bit of an ’80s distorted axe flair.

A couple more songs are standouts, as well. “When You’re Here With Me” is a close-your-eyes, turn-out-the-lights slow rock swayer, suitable for an arena full of lighters held high, with a late-song guitar solo driving home that classic arena rock lineage. And album-ender “Gold,” even though it protests “I’m tired of sleeping/It’s time to live” sways and jangles almost as if it wants to put the listener to sleep. As such, it’s a great closing number, gently lifting the covers up on this engaging 13-song soft, classic, ’70s-era, lushly produced pop-rock album and putting it to bed.

Excellent musicianship, tight songwriting, and warm, precise production combine to deliver The Golden Hour, a disc that clearly showcases Fernando’s talent from the first listen and whose songs’ initially apparent strengths grow on you with repeated listens, as you start to notice the precision and interesting details.

Kansas, Cheap Trick, Moody Blues… Fernando Perdomo is a soft pop-rock version of a lot of my favorite old rock bands. And that’s pretty cool for whenever I want to hear good music with rich, lush, full production, but don’t want it too loud. Per Fernando’s website, The LA Weekly says he’s “The millennial answer to Todd Rundgren.” Yeah. I wish I had thought of that.

I don’t see any upcoming shows listed on the Events tab of Fernando’s Facebook page, but be sure to check back regularly to see, particularly if you’re in southern California, since he’s based in Los Angeles.