I gave a sneak peek at a couple of this EP’s tracks at the end of my Immortal Waltz review in 2017. One of those was the title track, “Alive.” Driven by churning guitars, some nearly-full-stop tempo changes, and a breathy flavor to a fair portion of the vocals, this is a power rock track. And it’s stylistically very clearly an Edge of Paradise song.

image courtesy of Edge of Paradise

I totally dig the harmonies in hard rocker “Dust to Dust.” Yet, as straightforward as this track is, it still keeps the listener off-balance with croakily growled vocals and off-balance musical backing during the bridges. Indeed, nothing about an Edge of Paradise song is ever perfectly straightforward, but this churning rocker sprinkles EoP’s trademark song-twisting elements with a light touch for a fun change of pace.

It’s followed by “Mystery,” a theatrical ballad, suitable for anything from radio play to a rock opera performance. Monet’s straining vocals sit atop a music bed based on piano and orchestral strings, driven by booming drums and a rock guitar growl. An extremely touching, emotional, sensitive ballad, “Mystery” shows off Edge of Paradise’s range and is the song on this disc with the broadest cross-genre appeal.

The power is back with “Shade of Crazy,” with Monet’s expressive vocals providing texture to the otherwise hard-driving, powerful, crunchy melodic metal song.

“Humanoid” closes the Alive EP. Kicking off with frenetic drums and guitars behind an odd croaking vocal, the song evolves into a rhythmic power rocker in which Monet’s vocals are largely another instrument, and the beat is the real star.

I’m never sure if Edge of Paradise is one of the more uniquely original progressive rock-influenced melodic heavy metal acts or if they’re one of the more mainstream power rock-influenced heavy theatrical progressive bands on the scene. Regardless, their music is fun to listen to, their musicians and vocalist are top-shelf hard rock/metal talent, and I always look forward to hearing what they’ll do next.

I’ve taken so long to get this review written that Edge of Paradise’s new album will be out in just a few months, so there’s plenty to look forward to, but if you don’t already have this EP, it’ll be a great way to fill the gap while the next disc is in the works. In the meantime, also check the band’s website for tour dates. Currently listed are a couple early 2019 shows in Japan – January 31 in Yokohama and February 2, 2019 in Tokyo.

The depth, warmth, and emotion of Allyson Paige‘s voice is what first stands out, and it’s the piece of the Little Girl Lost musical tapestry that remains a memorable constant. Stylistically, the three songs included on this musical snippet are old-school, folky country. The folkiness comes from Allyson’s picking (and, I assume, grinning) guitar style. The music on this disc would dub Allyson the country singer on an adult contemporary radio station, the folk singer at a country dancehall show, or just the singer-songwriter at an outdoor festival. 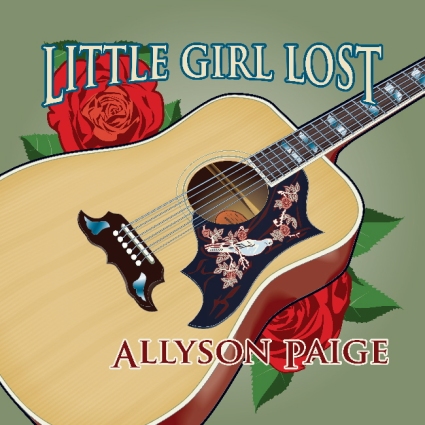 The most energetic – and most knee-slappin’, twangy – number on the disc is the title track, “Little Girl Lost.” It’s a lively story-filled ditty with tempo changes, hooks, vocal flourishes and guitar runs all endearing this song quite quickly. A fun song, you’d definitely turn the sound up on the radio if this came on. This is (usually) my favorite of the EP’s three songs.

The other two cuts on Little Girl Lost are much softer, slower in tempo. First, a heartfelt ode to a certain beloved Gibson guitar, “Gibson Dove.” Sentimental and poignant, Allyson’s voice wavers in all the right spots, cementing this song’s very personal, emotional nature.

Final track “Jerry the Viking” sneakily became another favorite over the past many months. A strumming number that most clearly shows off the soaring power of Allyson’s voice, it plods along pleasingly in a sway-to-the-music drinking song style. But one from the end of the night, as everyone’s almost fallen asleep, mellow from perhaps a drink too many, its slow tempo bringing the EP to a close with a warm, pleasant, satisfied feeling.

I’m a big fan of song-ordering on discs, and the song order of Little Girl Lost is ideal, opening with energy and closing with relaxing warmth, a feeling of completion.

This short collection from Allyson Paige seems like a great introduction to a talented singer. Rather, singer-songwriter, as the well-craftedness of the songs are perhaps the most important element, Allyson’s vox notwithstanding. Of course, if you’re already a fan, it’ll simply be a new favorite.

ArtPrize 2018 is upon us.  After getting my credentials I went to one of the mainstay eateries in downtown Grand Rapids for some live music.
That Beatles Thing, as you can surmise, plays the music of the Beatles with some of the authentic instruments. As a nod to ArtPrize 10, they decided to perform the songs of the album Rubber Soul. Pete Bardolph introduced the evening and let the audience know that there were two versions of the album, an American version and a British version.

They started the night with “Drive My Car.” They quickly followed that up with “I’ve Just Seen A Face.” And they basically played the album as they advertised they would.  The band is: James Murphy, vocals and playing guitar (and driving force of the band); Bill Van Ess, vocals and bass; Pete Bardolph, one of the longtime owners of Rainbow Music, singing and playing lead guitar; and Fritz von Valtier, who rounds out the foursome with drums and vocals.

The ballad written by John Lennon & Paul McCartney, “Norwegian Wood (This Bird has Flown),” with the signature opening chords, was stylistically and melodically poetic.  It is arranged/based on English folk songs minus the sitar. The vocals were spot on for “I’m Looking Through You.” James has a solid voice, and Pete volunteered that Ringo was a country music fan in the song “What Goes On,” which was sung by Bill. With the help from TB Player, he brought his authentic Hofner and a second bass so Pete could play the bass and sing on “Think For Yourself.”

If you are a Beatles Fan, you’ll appreciate their live performance. Their upcoming shows include Saturday, October 6th at the Grand Haven Eagles #925 in Grand Haven, MI; Saturday, October 13th at the American Legion Boat and Canoe Club in Grand Rapids, MI; and Friday, October 19th at Woody’s Press Box in Wyoming, MI. For additional shows beyond those, check the band’s website or its Facebook page.