If you are blessed with the talent to write and sing music, it often helps if what you do fits snugly into a musical genre. If you are going to choose a genre to perform in (if indeed you have the choice, it may just be in your blood), then country music is certainly a massive scene to be part of. It’s hard to be groundbreaking in such an established and competitive market but there is a level of quality to aim for, a high water mark of achievement. Not everyone can be that lucky, but it just may be that Chris Ruediger has the talent to reach that goal.

photo courtesy of Off the Stage Music

I would certainly say that Chris Ruediger’s latest single “Country at Heart” has the potential to be right up there with the country music mainstream. He seems to have a natural and easygoing ability to put a song across, and the song itself has a classic but contemporary feel, a pleasant memorable melody, and I expect for many country music fans, a lyric that they can relate to. Like he says in the song, “I’ve always had this in me from the start, I’m country at heart.” His rich voice belies his 19 years of age, and having listened to his previous singles, I would say this latest one is his strongest to date. There is an increasing maturity to his writing, and this song is a tour de force of classic country pop. A coming together of all the right musical ingredients to make it easily his best yet.

It was recorded at the legendary Sound Emporium in Nashville, written by Chris Ruediger and produced by Off the Stage Music‘s Nina Pickell. It was recorded in the room where “Mamas Don’t Let Your Babies Grow Up To Be Cowboys” and countless other hits have been recorded over the years. 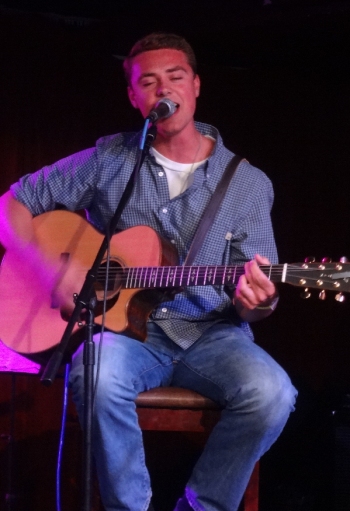