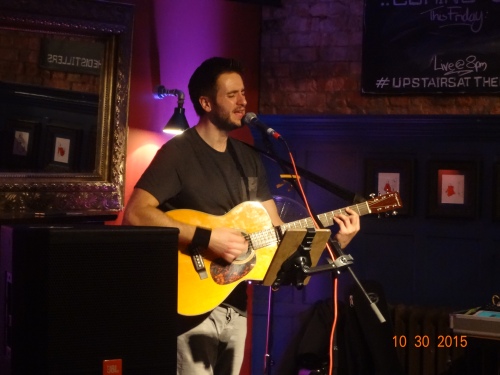 I’m in London for five nights and plan to review one show each night. For Friday night, Night #4, I had a few options, but the one that sounded the most interesting was going to take two trains and a bus to get to and from. Typically, I’d like to see more than one band on the bill, and I had really planned to focus on original music this trip, but I made an exception. The Distillers is a room multiple people I respect have played. Therefore, I opted to see a show there just so I will have seen the room in person next time I see or hear it mentioned. Plus, I checked out Tom Lukas’ music online before the gig and thought he’d be worth seeing in person. 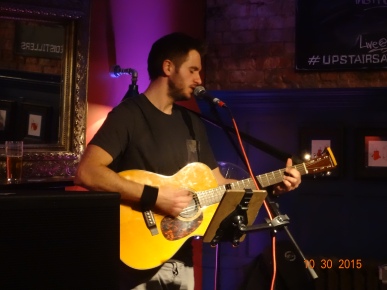 Tom has a gravelly, expressive voice (though he surprised me by losing the gravel on one tune in particular), a range that allows him to perform well across a broad spectrum of styles, a variety of guitar tools that help keep the guy-with-a-guitar thing fresh longer. On this evening at The Distillers, Tom put those to use across three sets of cover songs.

He selected a fun track to open the night with, The Lumineers’ “Ho Hey,” absolutely nailing the song with and emotional, rough edge to his voice. Hey followed that with one that engaged the night’s early crowd a bit more, Ray Lamontagne’s “Trouble.” In fact, the theme throughout the night was Tom’s gravelly vocals, good vocal range, and ability to vary his style of music and tempo well.

Speaking of varying styles, and because I’ve already described his style, I’ll just mention a few of the more notable songs in Tom’s repertoire. On his rendition of Otis Redding’s “Sitting on the Dock of the Bay,” Tom rounded some of the original’s rough edges but added a few vocal flairs of his own. Vance Joy’s “Riptide,” meanwhile, is a song that really suits Tom’s voice, and he delivered it with great energy and a bit of a modern style.

Tom showed off his tempo change skills with Jack Johnson’s “Better Together.” His version of “Every Day I Have the Blues,” meanwhile, was relatively clean, crisp version but still with a bit of his cool rasp. Tom got a bit funky later on with a cover of Blackstreet’s “I Like the Way You Work.”

Tom’s cover of “Ain’t No Sunshine” was a subtle departure, in that he showed off deeper vocals without his trademark gravel — a great choice for this song, one that impressed. His interesting arrangement of Pharrell’s “Happy” came across more rocking and rootsy than the original. And it took me a few seconds of Will Smith’s “Gettin’ Jiggy Wit it” before I decided his cool rendition was worth gettin’ jiggy wit.

Indeed, it was a smorgasbord of great songs all night, also including Stevie Wonder’s “Superstition,” The Killers’ “Mr. Brightside,” the oft-covered “Brown Eyed Girl,” Daft Punk’s “Get Lucky,” and a rendition of “Summer of ’69” that could almost have been Bryan Adams himself.

So in spite of the fact I caught a cover night performance, I was treated to a talented singer-songwriter (sans the songwriter portion of his repertoire) performing a broad range of songs, varying his basic style just a bit to fit each of them.

I have an idea for Night #5, but I’m not sure if I’ll change my mind, and then I’m not sure if I’ll be able to get it posted the next morning because I need to check out of my room and fly back. So if Night #5 gets posted quickly, great. If it’s delayed, well, now you’ll know why.

One thought on “Five Nights in London #4: Tom Lukas”