As you may or may not know, I’m a sucker for great, hook-laden pop-punk. I’m also rather selective about it. So if you see me cover a fair number of pop-punk bands in this blog, know that for each band that makes the cut for a review, I’ve sifted through oh-so-many not-so-great ones. I have written about one no-longer-performing favorite, Preston (UK)’s Next Stop Atlanta, as part of my “Road Back” series. A few other pop-punk bands I discovered while “on hiatus” from music journalism also broke up before I returned to writing, though there are a couple others I may reach out to in the coming months.

Pertinent to today’s review, I recently stumbled across Glasgow’s Altered Sky purely by accident. Well, not exactly. When the band’s lead singer, Ana Nowosielska, followed me on Twitter, I followed her back, as I always try to do when musicians follow me. Soon thereafter, I found time to check out her band’s music, something I don’t find time to do nearly as often as I’d like when musicians follow me, and I immediately got in touch with Altered Sky to offer to review its album. So I suppose I should get to the review…

There are a lot of mediocre pop-punk bands out there. Altered Sky is not one of those. This group is exceptional. Formed in 2010, the quartet of Ana Nowosielska (vocals), Amy Blair (drums and backing vocals), Rich Passe (guitar), and Ross Archibald (bass) delivers hooky, tight, well-structured, engaging songs. And the band’s newest release, Without Wonderland, is an energetic, powerful pop-punk compendium. 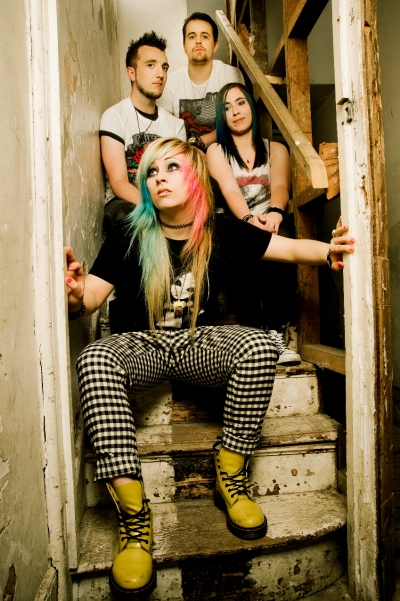 Altered Sky roars out of the gate with “This War Is Mine,” delivering the album’s most instantly memorable track at its outset, showcasing the group’s trademark rhythmic tension, powerful yet sensitive and emotive vocals, and buzzy, quick-hitting guitarwork. Oh, and the listener will soon be singing along from “I’ll give you one more chance to run…” all the way through the chorus.

“Stupid in the Dark” is an interesting second song, as it winds tension tighter and tighter with no significant release. Proof that Altered Sky is willing to toy with its listener. Indeed, the releases follow in many of the other tracks, perhaps more enjoyable because of the way this still-quite-catchy song tightens the screw a bit early on.

Currently vying with “This War…” for designation as my favorite track on the album is energetic rocker “Bury It All,” which employs an upbeat, hopeful musical style, builds periodically to musical climax, and features crisp, clean, strong, smooth vocals. Perhaps most on “Bury It All,” though also in other songs, Ana’s vocals hint at a bit of the pop-sassy vocal style sported by young mid-’00s almost-star Skye Sweetnam, a bit of a gold standard even now.

Oddly tuneful mid-tempo rocker “Songbird” is another standout, replete with attention-grabbing stop-starts and a clever blend of edgy and smooth vocals.

One of Altered Sky’s singles from this disc is “Waves”, a memorable track due largely to its insistent, pleading, persistent vocals. Not quite as much unresolved tension as with “Stupid in the Dark,” though the releases, again, aren’t complete; yes, though it’s not quite a theme, musical tension-maintenance something Altered Sky does quite well.

Without Wonderland ends with a heavy drum-driven number, “White Witch,” that showcases the edge in Ana’s voice. A powerful, slightly-off-balance, proud entreaty like this track is essential for the band’s genre; well-executed, it’s a great way to close this fine, 10-song collection on a powerful high note.

Altered Sky recently concluded a UK tour but will take to the road again this summer. Altered Sky has announced dates for an acoustic tour with Beyond Recall at Pulp stores in the UK. With all shows scheduled for 5:00 pm starts, announced dates are: July 28th in Glasgow, July 29th in Edinburgh, August 1st in Leeds, August 2nd in Bristol, August 3rd in London, and August 4th in Nottingham. Be sure to check the “shows” page of Altered Sky’s website for further information and to discover upcoming live dates whenever they’re announced.