This is the second release from Detroit punk rockers Screw. This follows in the footsteps of their debut Fight at a Funeral, which came out in 2014. The members of Screw include Tommy T. on lead vocals, Hot Rod Tusek on guitars, Stevie Silvers on bass, and Nik Savage on drums. In many ways they are the real deal, as members of this group paid their dues in formidable and influential Motor City bands like 60 Second Crush and The Cult Heroes. They bring that raw-yet-refined pedigree to the grooves here. 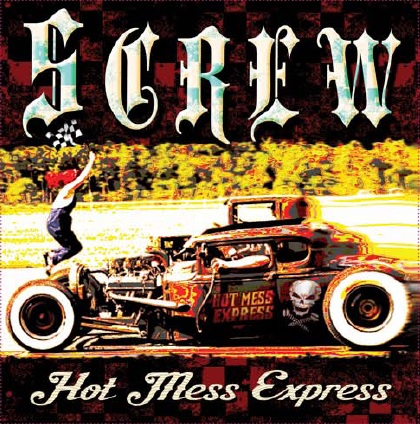 Screw is a dynamic and thoroughly engaging live act. They bring the sweat, vitriol, humor, and musicianship and leave it all on the stage. Sometimes that integrity gets lost in the translation of the studio. But that’s not the case here. Right from the get-go you get swept up with the opening track “Government Fool.” This starts out with a fuzzed out guitar reminiscent of Dave Allan and the Arrows’ classic “Blues Theme.” It quickly develops into a scathing uptempo diatribe on the futility of the modern political climate. Tommy T. delivers words that really pack a punch, with an authenticity and clarity rarely heard in modern rock. The rhythm section is solid and airtight as Tusek’s controlled use of feedback and clean distortion is a delight.

“Lips” follows and is catchy in a Social Distortion-meets-Stooges kind of way. Tommy’s phrasing is right on point and dovetails well with Tusek’s short wah-wah inflected solos throughout. This is tight, tough, and in your face. “Much Too Much” seems to offer a cautionary tale about substance abuse, with the hook “don’t throw your life away.” It’s a short and sweet message, with solos that are equally succinct and hit you where you live.

The disc concludes with “Turn Away.” The guitars and bass mimic a strong rhythmic undertow that goes into double time later in the tune. This is a really energetic track that seems to draw from modern masters like Bad Religion and The Descendents or All.

Screw is a loud and proud tour de force that picks up where classic Motor City bands like The Stooges and Sponge have left off. As aforementioned, they are a killer live act, so be sure and catch them when you can.

Per Facebook, you can catch Screw today, Friday, October 14th at the Maidstone Theatre in Ypsilanti. According to ReverbNation, Screw has an upcoming concert scheduled at Tangent Gallery on Friday, November 25th. Watch Screw’s Facebook page and local concert listings for additional dates.