Two or three years ago, I found Lori & Fred’s music online. If I’m not mistaken, they were playing as part of the summer concert series in my town, and I checked out the various performers’ music when the schedule was released to decide who I might enjoy seeing. Though I wasn’t able to attend the show, I was impressed by their music. Notably, I thought the song “Mystery” was something quite special, so I downloaded it and played it regularly; it remains a song I keep on the rather limited playlist on my phone.

My first attempt to see them perform live was a concert for which I had purchased tickets weeks in advance before it was cancelled due to a snowstorm in the winter of 2014/15. Schedules haven’t matched up again until yesterday, when they played an afternoon set during Sholan Farms’ Harvest Celebration Weekend.

It was a beautiful day for a concert. The rain held off until a few minutes into my drive home after the show. Lori and Fred played a mix of covers and originals, all suiting their style, which is relatively unique among widely-performing, popular local artists. I’d call it soft adult contemporary. You might label it easy listening, though I’d beg to differ, as the vocal dynamics and interesting guitar-picking place it in the more broadly-appealing AC category, with the potential for the occasional breakout, crossover pop hit. For those of us whose musical tastes defy category, though, they’re simply a pair of outstanding singers, songwriters, and musicians.

Lori’s sweet, powerful, versatile high voice harmonizes perfectly with Fred’s vocals. And when Fred sings vocal lead, he showcases his crisp. mid-range voice with an occasional vocal growl dropped in for good measure. Musically, Lori’s engaging piano-keyboardwork is augmented ably by Fred’s crisp riffs, often subtle, always adding texture to the songs. Often, Fred spices up slow-tempo songs with intricate, dancing soft guitarwork. Of course, I intentionally went to see this gig because I was impressed with what I had heard online, so I was hardly surprised when Lori and Fred delivered.

The duo mixed covers with originally during their performance. Lori’s vocals on “Crazy Love,” a standout cover, contained a soulful, almost gospelly sound, while there was maybe a hint of blues-gospel in Fred’s guitarwork.

I do, of course, love a good original. On “All Comes Round,” Lori and Fred swap lead vocal responsibility back and forth, as Lori’s sweet power pairs well with Fred’s vocal richness (and a well-placed growl). “Good Harbor”, meanwhile, is a sweet, hopeful, relaxing song about love.

Lori and Fred closed with “True,” a lush piano sound on the keys in this smooth song that recalls ’70s-style adult contemporary-edged pop; it showcases the particular phrasing style from that era’s singer-songwriter hits.

In the end, the concert was well worth the drive. Lori and Fred put on an entertaining, laid-back show. They mingled with the crowd during their break and at the end of their gig. And Sholan Farms was a friendly host for the day, with a food trailer providing lunch and a chance to snag a little cider at the farm store. I look forward to catching Lori Diamond & Fred Abatelli again in the future; and I love an afternoon, outdoor performance, so I’ll keep an eye out for future live music at this particular orchard in coming years, as well.

Lori & Fred’s next date, per the tour page of their website, is 3 PM on Saturday, October 29th at Tower Hill Botanic Garden in Boylston, MA. Then they have a gig the evening of November 27th at Parish Center For the Arts in Westford, MA. See the duo’s website for more gigs scheduled in December and beyond, in addition to any new shows they add in the meantime.

Bad Mary – We Could Have Saved the World

EP Review of Bad Mary: We Could Have Saved the World 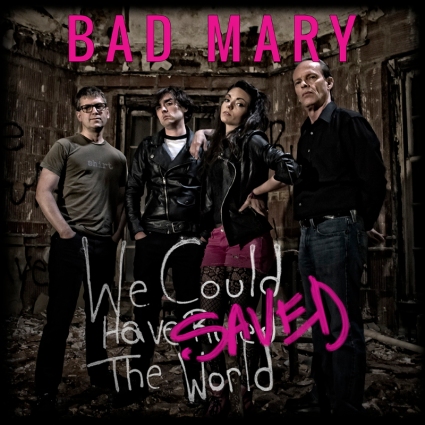 It’s a rare band that performs real, old school, 1970s New York punk rock as true to the genre’s icons as Bad Mary does while still keeping it fresh and current. Indeed, it’s a rare band of this style that catches my ear the way these Long Islanders do. As such, the comparisons are almost so obvious it’s embarrassing to list them: Blondie, The Ramones. There; I did it.

We Could Have Saved the World is the band’s follow-up to its 2015 EP, Killing Dinosaurs. Lead singer Amanda Mac delivers raw, aggressive, tuneful vocals. The rhythm section of Mike Staub and Bill Mac maintain a frenetic beat. And Dave Henderson lays down rough-hewn, hook-laden guitar. OK, I just described every punk band. The hard part is achieving what Bad Mary does – rocking it better than almost everyone else. 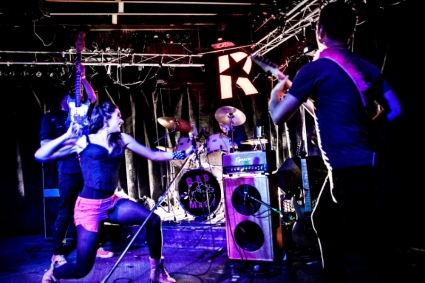 With just six songs on We Could Have Saved the World, I’ll give each a little attention:

First song “Creeper” opens at a blistering pace; there is no warming up on this disc. This may be my favorite song on the album. Aside from some medium-tempo bridges, this tune is full-speed ahead. “Creeper” deftly intermingles a guitar hook, echoing support vocals in spots, and insistent, aggressive lead vocals within a hypnotically enticing rock guitar-driven package.

“Marz Attaqx” keeps the pedal to the metal and the fun/energy quotient on overdrive. Seriously, by the end of song two, an active listener will be completely out of breath.

“Trouble” is the song that most reminds me of Blondie, both vocally and rhythmically. It is a half-step down in pace from the first two, providing a much-needed respite while offering some Debbie Harry-esque squeals that turn into power vocals. If we hadn’t heard Blondie (because we lived in a cave), we might be surprised by the song. Even with the iconic comparison, we are impressed. And I’m particularly fond of the guitar solo here, giving props for melding axework into a raw punk number that would be equally well-placed in a mainstream hard rock song.

“Cloud 9” is almost balladic in its pace, filled with a wall-of-guitar rhythm and rough-edged vocals with climaxing screams toward the end. Plus, there’s a nifty distorted-rock guitar solo in the middle. You’ve probably heard this song structure before, but Bad Mary does it to the nines. (Yes, I had to.)

“Meanwhile” opens with Green Day-ish axework and plows forward with a pulsing rhythm, punctuated by approaching tempo changes that never seem to happen, followed by an abrupt end.

“When You Think of Me” is medium fast-paced compared to some of the others on this disc. The music and vocals pulse, tease that they may be about to head out-of-tune a few times but don’t, and ultimately close with the sort of power chord full-stop that might end a killer set.

I’m exceptionally picky about my classic-style punk rock – I think most of it is poorly done; sloppy but not sloppy-good. Bad Mary’s tempo-changes, climaxes, and attitude are all genuine and by design. As a result, there are now two New York punk bands I’d be willing to see in concert. Next time I’m in the City, I’d be thrilled to stumble into a Bad Mary-Baghdaddios double-bill.