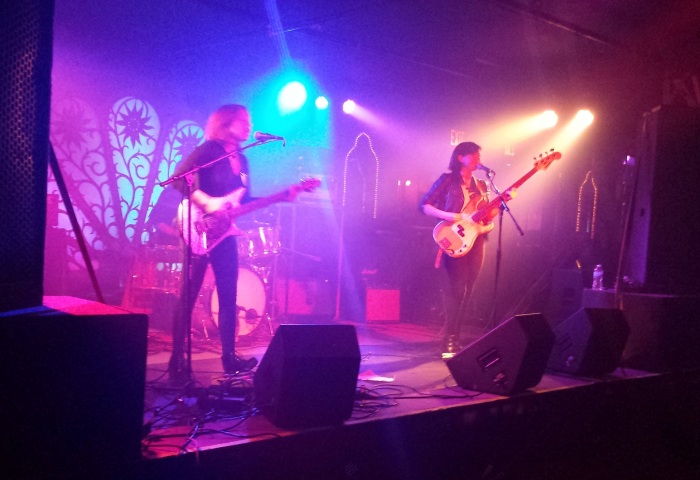 Earlier this year, I discovered New Myths’ music. I don’t recall how or where, but I was intrigued by their uniquely original sound and placed one of their songs on a personal playlist I listen to when I’m in the office. So, by now, I’ve heard the band’s “Edge of the World” dozens of times. When I planned this New York trip, I checked to see if any of my already-favorite New York bands were playing. So I was excited to get a chance to see New Myths live.

Brooklyn Bazaar wasn’t a venue I was aware of before this show. What a cool, spacious room its upstairs concert room is. Like a funky multi-function room with style. And as New Myths’ set time approached, the room began to fill.

With a bit of a foggy haze on the stage, New Myths’ initial song began as an atmospheric soft pop-punk number with haunting vocals and then cranked things up a notch. I’m not sure there’s a fitting category for New Myths’ intriguing, edgy, alluring sound other than alt-pop-punk.

Varying across songs, of course, there are elements of Blondie and The Muffs on the one (more rockin’) hand, and Missing Persons, ’til Tuesday, Human League, and Berlin on the other (synth-pop/New Wave) hand. It’s a blend of familiar sounds presented in a new way with subtly catchy hooks. New Myths display the energy and oomph of punk but with more of the aural aspects of the poppier New Wave artists.

As for the concert itself, with the lights, fog machine, and New Myths’ on-stage rock ‘n roll attitude, this did feel like a smallish, relatively intimate concert rather than a club show.

The songs throughout the set varied. One was a pulsing number driven by the drums with edgy, atmospheric vocals and a catchy bass line. The next had a catchy drum rhythm with the bass line doing the muscle work. And always there were the vocals – wailing, cracking, squeaky, haunting… always fitting the song, sometimes in surprising ways.

Often in the songs there were vocal harmonies, too. On one track, in particular, I noted that, with the catchy beat and vocal harmonies set against an aggressive musical backdrop, New Myths sounded a bit like the angry Go-Go’s 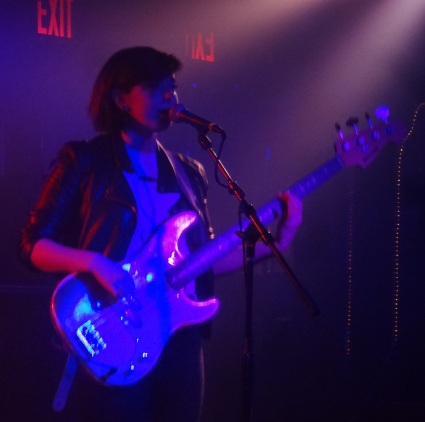 And the occasional rough edges? They’re in line with the band’s punk attitude.

“Playing With Fire” was a highlight, with a bass line that weaves around and a catchy drum rhythm, plus what I can best describe as a wall of vocals.

“Edge of the World” is my longtime favorite, the song on my personal playlist, and I knew it from the first opening riff of the song-starting guitar hook, which drives this track, featuring squeaky, atmospheric vocals supported by harmony vocals.

But there was one other song that stood out even more for me live. It features a harmonic, haunting punk-rock war cry, surf punk guitarwork, and a playful drum beat. Based on those notes (since I only knew the one song very well before the show), after a skim of the band’s songs on SoundCloud this morning, I’m pretty sure it’s “False Gold.” Seriously, this one could have monster crossover appeal.

I would absolutely recommend catching a New Myths show. They’re stylistically original in a corner of their sub-genre that’s not commonly done. At least, it’s not usually executed nearly as well as New Myths do it.

New Myths have one upcoming gig listed on their website, a December 10th date at The Mercury Lounge. Watch the band’s “tour” page for details and future shows as they’re added.

My week in New York continues tonight. I do have a concert in mind, and it’s a bit late, so I’m not sure if I’ll get a review posted tomorrow or if my two remaining nights of reviews won’t be online until a couple days after the shows. There are some other, earlier shows I have my eyes on, too. I’ll decide later today. I’ll finish my extended sampling of the New York live music scene on Saturday night when I’ll be at the Knitting Factory in Brooklyn to catch The Dayz.