Another great evening of jazz from a group featuring some of the most acclaimed local jazz musicians, the Fifth Season Quartet. The line-up last night was the same as last time I reviewed this group but with one addition. The quartet of Elena Koleva (vocals), Plamen Karadonev (piano, accordion), Greg Loughman (bass), and Austin MacMahon (drums), who I had seen perform last winter, were joined now by standout jazz harpist Charles Overton. 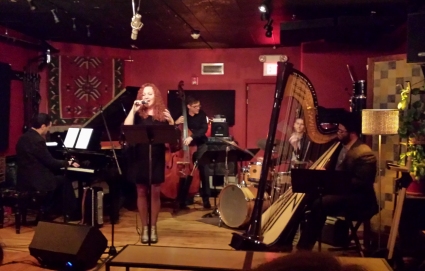 The group opened the evening with “Falling Grace,” showcasing Elena’s rich vocals and Plamen’s piano chops. Indeed, throughout the course of the evening, there was plenty of vocal riffing and ivory tickling, but since this is a bit of an all-star cast, there were also several showcases of each member of the band’s individual talents, ranging from true solos to extended jamming led by different bandmates. One such extended bass riff occurred during “Orange Colored Sky,” which may be built around some serious vocal gymnastics but was also delivered with segments of instrumental creativity, as well.

A couple of Plamen’s original numbers were featured during the nine-song set; in each case, Elena left the stage for these instrumental pieces. Mid-set, the band performed “Urban Things,” a progressive jazz number with a bit of a harsh edge, largely focused on the accordion parts. And toward the end of the set, though not exactly an original, the band rocked through Plamen’s arrangement of a Macedonian and Romanian folk number. This arrangement, in particular, brought a great deal of energy to the room. Indeed, much of the set showcased Elena’s amazing vocals, often in balladic form, but this original was the tentpole of a threesome of set-ending energetic, faster-tempoed numbers.

Yes, the energy continued as the group ended its evening with a rousing rendition of “It Don’t Mean a Thing.” A fine ending to a terrific set of oh-so-cool jazz.

You’ll be certain to catch us at future Fifth Season Quartet gigs; they’re what you’re looking for when you crave a jazz-filled evening.