EP Review of Nathaniel Land: My Destination’s You

Nathaniel Land is a New York City singer and songwriter whose roots stem from a musical family – he’s a relative of Robert Hunter of Grateful Dead lore. His press info says that after years as a performing and studio guitarist, Nathaniel developed his songwriting craft under the tutelage of Nashville legend Hugh Prestwood at the New School. He says that he writes and arranges vibrant material in the mold of Max Kearney, Ryan Adams and David Gray.

“I am so excited to release My Destination’s You”, states Land. “The material represents a huge step forward for me on many levels.”

I am sure that every artist strives for progression from album to album. No one wants to get stuck in a groove, and yet it is important to keep the themes and styles familiar to your fans. I would say that this is achieved on this new release, which has extended on the earlier, vaguely R.E.M.-esque sounding album Make This World Our Own into this much more Americana experience. My Destination’s You is rather like Michael Stipe goes country. 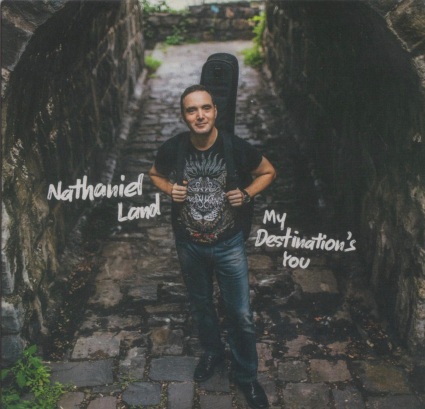 The progression from the previous album brings us closer to something more reminiscent of an imagined 21st century James Taylor or Cat Stevens with a grounded Americana country vibe. Nathaniel has a rich, pleasant timbre to his voice, and the record is well-recorded with wholesome production, crisp acoustic guitar, and clean simple construction with just the right decisions being made about the instrumentation. This has been achieved with the studio talents of Chris Cubeta, who produced the album at Studio G, Williamsburg, New York City and Alex De Turk, who mastered it at Strange Weather Studios. All the songs on the album have been written by Nathaniel, and as he says, “The songs reflect my sincere desire to touch and inspire, to help people reflect on their own lives, and to open new possibilities of love and fulfillment.”

Opening track “Emily” quickly makes this desire a reality. There is a longing tone of a traveler’s remorse that colours the song with an identifiable resonance. On a personal level, I think that it can be an exposing method of songwriting. When you write, you can choose to hide behind the imagery you create or you can be intensely honest about your feelings. This is a revealing and open approach to writing and works well here set to a relaxed and syncopated acoustic groove.

“California Blue” is another travelling road trip of a song. Descriptive and easygoing with a rewarding sense of build, enhanced by its sprinkled subtle guitar parts. I can’t imagine anyone who likes this genre of music would not enjoy this; it does everything you would want it to.

There is a similar feeling of musical satisfaction on the next track, “Take Your Chances.” Once again, the swing of the track is perfectly achieved to draw you in, and the melodic acoustic approach combined with the universal message of taking your chances while you can is an appealing one.

I should say that, as the next track “Lonely Life” began, it struck me that, as well as the quality of the songs and production, I was also enjoying the sequencing of the track listing. One song effortlessly moved to the next and took you on the journey no doubt intended by the creators. “Lonely Life” is more uptempo and maybe the most contemporary country pop sound so far on the album. Like a soft Nickelback, and I could see it being the most radio friendly.

“Liar” is the penultimate song on this 6-track EP/album. This was the least penetrable one for me. It’s not that I didn’t like it, just that maybe I needed more listens of it to grow on me. There was a very ’80s sequencer synth part that made me slightly question if it fit with all the other songs as comfortably as maybe hoped. Verdict’s out, but I think in time I will like it, just not so much as the rest.

The release ends with the title track “My Destination’s You,” which rounds off everything very nicely and fulfills Nathaniel’s original desires to speak of love and possibilities in a sincere and inspiring way.

This release does indeed deliver Nathaniel to his hoped-for destination. There are a lot of people trying to make music in this genre, and so it takes something special to stand apart. I think Nathaniel has that, and so it’s not hard for me to encourage you, if you like good quality acoustic-based Americana pop, to go and buy his new record.