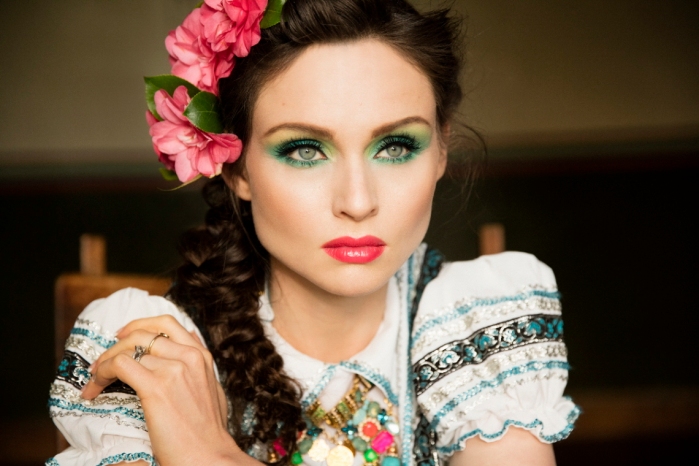 British pop music. You know what it sounds like. And when it’s done well, there’s nothing quite like it. Sophie Ellis-Bextor hits that mid-tempo British pop sweet spot. On Familia, there are a few songs that might hit the dance floor, and maybe a song or two that qualifies as a ballad, but the disc is dominated by songs whose tempos fall in-between where they’re best-suited to be radio and concert favorites.

American audiences may not be familiar with Sophie, but she’s well-known in the UK. And, while I’m professing ignorance, I am pretty sure I’ve heard and enjoyed “Murder on the Dance Floor” before. (Seriously, click that link; both the song and the video are worth a look if you’ve not seen and heard them before.) That was an early hit for Sophie from Read My Lips, her 2001 solo debut after leaving her role as frontwoman of theaudience. While she spent much of her solo career in the electro-pop dance subgenre, then surprised her fans with a baroque chamber pop release (Wanderlust) that dropped in 2014, her most recent before Familia, I’ve not followed her career closely, so I’m coming in with a fresh set of ears. And while I do hear the Latin influence in this disc, and I’ll point it out in a couple spots during this review, Familia still fits my expectations of a British pop star’s release. “Star” is an important word there, as where a typical pop singer would hew tightly to a stereotypical pop style, I’d expect a pop star to mix in new influences and try different things on each album to keep her music fresh; this is something Sophie ably accomplishes in Familia.

I’m afraid I’ve ruined the suspense; I adore this album. It’s a genre I wouldn’t ordinarily gravitate toward, but when done well like this, it can be special. I hear elements of Bananarama in here, a bit of Wham!, elements of Simple Minds (notably, a “Don’t You…”-ish tempo in at least one spot), and perhaps a hint of Duffy or Geri Halliwell but with a richer, fuller tone. Familia shows Sophie Ellis-Bextor deserves to be mentioned in the same breath with all of those stars. Indeed, the hardest part of writing this review is deciding which songs to highlight, since there’s barely a weak link in the collection.

Familia kicks off with one a dance floor-ready offering, “Wild Forever,” whose electronic opening hints at something this record is not, as this catchy tune is the closest Familia comes to electronic dance-pop. As the song progresses, instruments and voice soar, crash, and boom; that’s more accurate foreshadowing.

Another of the dance club-ready tracks is the energetic, catchy “Come With Us.” If you listen past the vocals and beat, you’ll hear the subtle musical hook that makes it memorable and some darker-than-expected lyrics. That’s what elevates the best pop music and makes it unforgettable; it’s the attention to detail. This, by the way, is the song that brought to mind Wham!

The “balladic” section of the record begins with the not-quite-a-ballad “Death of Love”; certainly, we’d be willing to slow-dance to it. The music soars and emphasizes a sweet, soft spot in Sophie’s voice. It’s followed by “Crystallise,” a sweet, soft, slow song that really is a true ballad.

While the Latin American influence shows itself in several songs on Familia, it’s most apparent on the terrifically engaging “Unrequited,” with a Latin rhythm that recalls old Western TV and movies, though Sophie’s warm, rich vocals and the warmth of the strings aren’t something you’d find on a lo-fi old movie soundtrack. And it’s there a bit on “Hush Little Voices,” appearing periodically around the slightly quivering vocal and flowing, swaying strings of this twisted lullaby.

Most of the rest of the disc resides primarily in that British-pop-star zone I referenced above. The lush orchestration and powerful, adeptly smooth, strong, and versatile vocals just beg for chart-topping status.

My favorite may be “Here Comes the Rapture,” with strings supporting Sophie’s uniquely strong vocals, vocals that smoothly navigate rich medium-lows and sweet, soaring highs, occasionally throwing in a bit of rasp, though only selectively. This is one of those songs that elicits an involuntary reach to increase the stereo volume from its first notes.

Deftly incorporating a somewhat electro-pop musical element from its opening, “The Saddest Happiness,” another personal favorite, combines flowing strings with a hauntingly slightly-quavering vocal to produce a quintessentially melancholy pop sound that’s only occasionally found on pop albums, probably because it’s hard to pull off this well.

Sophie ends the disc with another number that shows her versatility and relies on the power of her vocal highs, “Don’t Shy Away.” Though there’s nary a weak spot on the disc, it ends with strength. Such strength that it’s hard to remove Familia from the CD player as it ends; typically, I just let it repeat and start again from the beginning.

There are a few British pop stars who beg the question “Why isn’t this person huge in the States, too?” Robbie Williams comes to mind. Add Sophie Ellis-Bextor to that list. And get your hands on this album. Perhaps snag a bit of Sophie’s back catalog, as well.