Blues music based on ancient poetry and recorded at Abbey Road Studios. Seriously, for those reasons alone, this would be worth a few listens. But the performers are also top talents, the songs are engaging and well-arranged. And if you didn’t know anything about the works referenced, you might never know the inspiration for this music. You’d simply consider it very interesting, entertaining, original blues. An ambitious, original project from Italian bluesman Mike Sponza, Ergo Sum is a musically-artistic success. 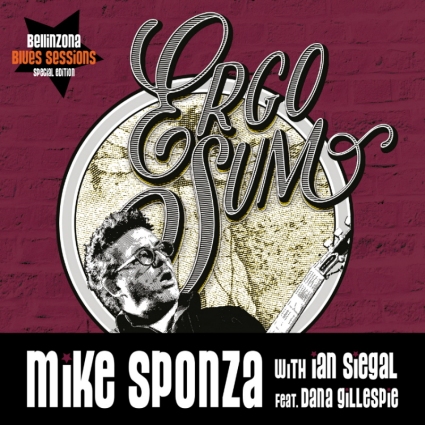 The disc kicks off with “Modus in Rebus,” a song that’s basically one great big blues hook. Crunchy guitar and a gravelly, insistent blues growl power this catchy number. It’s followed by “Carpe Diem,” which launches with an energetic travellin’ guitar line and a restrained, hoarse vocal; it’s a song you’d play during a road trip or that you’d expect to see during an energetic movie montage scene. Matel Kuzel contributes some well-placed saxophone wail. “Carpe diem. Baby.”

The disc continues, exploring different blues styles as it works its way through more ancient poets. “See How the Man” is horn and groove-driven. “Poor Boy” is more of a romping swing. “Kiss Me” is a musically thumping and grinding, steadily-paced blues romp. And “Prisoner of Jealousy” closes the disc with a soulful ballad full of raw, heartwrenched emotion.

In sum, Ergo Sum is an ambitious effort, exceptionally well-executed by a cadre of talented purveyors of the blues. And if critiqued simply as a blues album, it’s an exceptional disc that touches all manner of subgenres and styles of the blues in an enjoyable fashion. In other words, it’s a success all fronts.

I also hear there’s another Mike Sponza album in the works, so I look forward to that, as well.