I had been hoping to get to this club during my stay in Plovdiv this year. Several of my favorite jazz (or jazz-influenced) artists have performed here, so I knew to expect talent on the schedule. Obviously, I still checked out Coco ‘n’ the Fellas’ music before deciding to head out to the club, and I was duly impressed. Not just with the band, but with the club, as well. It has a comfortable vibe of its own, and I hope to return whenever I’m in town and find good music on the club’s calendar. Indeed, Plovdiv has a top-shelf jazz venue rivaling those of any major city.

London-based Coco ‘n the Fellas consist of Ami Oprenova and “the Fellas”: electric guitarist Daniele Ciuffrida, acoustic guitarist Joe Perkins, and upright bassist Havard Tanner. The group’s sound is gypsy swing-influenced. As you may know, while I appreciate and enjoy good jazz music, and I think music fans spanning most genre preferences would recognize Coco ‘n’ the Fellas as an exceptionally talented ensemble, it’s not my area of greatest expertise, so you can (as I did) click through to see what Wikipedia has to say about gypsy swing if you’re so inclined.

The group performed two sets at the Bee Bop Café, delivering the sort of performance I’d expect in a ’50s or ’60s jazz club, a cool night out in a setting with an air of sophistication. The “fellas” were tight when supporting Ami’s vocals, loose and adventurous when called-for, and occasionally a bit playful in their instrumentation. “Coco” frequently became the fourth instrument, as is the case in many jazz performances, scatting along with or in response to one of her bandmates. Just as notably, once every few songs, she would hold a note impressively long, often matching a note-holding cohort. In all, an exceptional outfit, well-matched and up to their collective task. 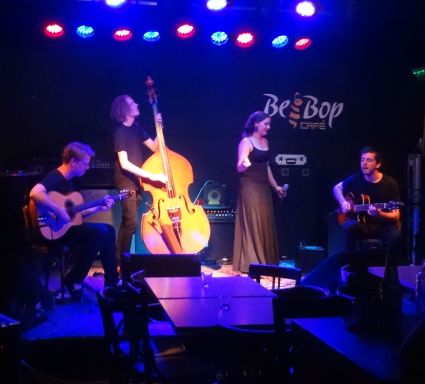 After a music-only opening, Ami joined the band on stage to begin the evening with “Honeysuckle Rose.” It was followed by an exceptional performance of Kenny Wheeler’s “Everybody’s Song.” The performance was smooth, like something straight out of a ’70s love story movie soundtrack, perhaps from during a montage scene. This was one such instance in which precise light instrumentation was deployed in support of Ami’s smooth, full vocal, her voice dancing around the melody, never sitting still on it.

I loved the tempo of “After You’ve Gone,” a (gypsy) swinging tune that was notably driven in parts by the electric guitar. And “If I Didn’t Have You,” an oh-so-smooth song overall, is primarily bass-driven with each guitarist moving the song along in a different segment.

At this point, Coco ‘n’ the Fellas pleased the crowd with a jazzy version of a traditional Macedonian song, one of my favorite moments of the evening, as well. 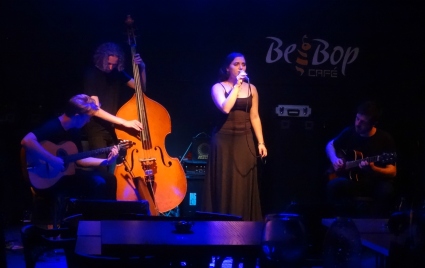 Another highlight was “A Red, Red Rose,” a very torchy number, one of several that showcased Ami’s strong lower register, contrasting it with the dynamic higher end of her vocal range. Ami and Joe performed as a duo on “Cheek to Cheek,” an uptempo strummer that included some serious scatting. And the band without Ami delivered an instrumental, “Dark Eyes,” that seemed like it should, on at least some occasions, inspire some jazzy folk dancing.

The second set was an extension of the first, an enjoyable performance by this talented ensemble. Rather than repeat myself too much, I made note of just three songs from the second set. “A Child is Born” is about as smooth and mellow and this quartet gets. Coco ‘n’ the Fellas original “Not Enough Coffee” doesn’t contain many words, but it is high energy, I noted, as if the song itself was actually hyped up on too much coffee (in a fun way, of course). And I noticed great energy on the group’s performance of “King of the Swingers,” a recording of which you’ll actually find on YouTube from one of the band’s London shows last fall.

Per the “live” tab on band’s website, Coco ‘n’ the Fellas continue their European tour in Bulgaria and Italy before returning to London. However, the dates on the website are off by one (unless they’ve been corrected since I checked since the band is aware of it), so you’d be better served to rely on this Facebook photo, which lists the correct dates, though it’s a little incomplete. Tonight (June 30th), the group is at Menthol in Varna (though it may be too late by the time I’ve posted this for you to get to the show), tomorrow (July 1st) at the In the Jazz Bar in Stara Zagora, and Sunday, July 2nd at Jazz Club Studio 5 in Sofia. In a couple weeks, the group will have a few dates in Italy. And then they return to London, with a few shows booked through August. The band tells me they’ll be in Ireland later this year, too. Be sure to check the band’s website (and/or its Facebook page) or the venue websites for additional information. And, of course, double-check the dates.