Jangly, raucous, old-school punk-influenced alt-rock. It has been more than 25 years since I last heard The Hendersons perform in several of Boston’s diviest bars in ’90 or ’91, but I’m pretty sure this is a lot like what they sounded like. And they were old-school at the time. I’m sure there’s a more widely-known comparison out there, but I don’t personally have a lot of hooky old-school punk-driven alt-rock in my memory bank or my music collection. I do, however, know great music that deserves a spot on my personal playlist when I hear it, and this is definitely that. So I’ll just dive into describing the songs on Lisa Said‘s attention-seeking (and attention-worthy) 4-song collection, Estranged, still relatively hot off the presses from its July 7th release.

Swampy punk-blues guitar riffs punctuate the too-cool, ’70s punk-pop disc-opener “Some Dudes.” I can picture it as the soundtrack of a TV commercial advertising a retro-chic new muscle car, driving along a beachfront road, with tanned beachgoers, surfer dudes, rollerbladers, and families turning to watch the car drive by, jaws dropped. The album notes mention Seth Kauffman as the electric guitarist on this song; his chops combine with Lisa’s vox to produce a memorable sound. 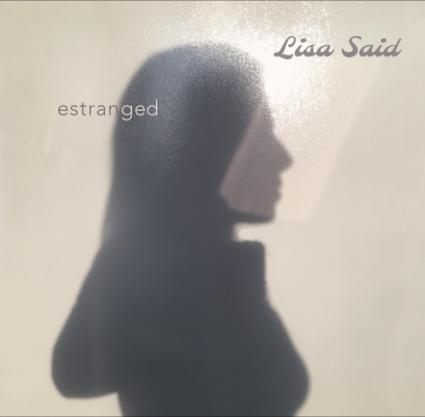 “Regular Guy” perhaps most encapsulates Lisa’s sound on this album. It’s pop alt-rock that comes across like a raw, stripped-down Chrissie Hynde. It almost has a first-draft feeling, as if recorded in one take and filtered through old cassette player/boombox speakers before being remixed to produce its warm-yet-raw sound. There’s still an electric guitar line with a bit of a crunch dancing in the background for emphasis – Joel Schantz is credited as the electric guitarist on this track – but this is a support element, not the main driver of “Regular Guy.” With all of its interesting elements and subtle coolness, this one will grow on you.

The crunchy electric guitars are gone for the second half of the EP, with “Peel the Moon” combining some more emotional soft howls with a jangly guitar song-engine to provide a sound that’s peppier than its mid-to-slow tempo might otherwise suggest, sure to put a hop in your step as you bop along to the music. And you’ll skip or dance a bit wherever the almost-country-style guitar picking steps to the fore. Good music to play on your headphones while walking through the park on a sunny day. Or perhaps while walking along a two-track dirt road in the country. In either case, you’ll be smiling.

The EP closes with “Up Not Down,” which immediately strikes a more thoughtful tone and slower tempo, though still relatively light. Lisa’s voice is easy to listen to, even as there’s a little rough edge to both her voice and her vocal delivery here. There’s a hint at the swampiness of the EP-opener and a little Americana-ish flavor to this song in such a way that causes you to more easily identify this influence, a bit obscured by other elements, in the EP’s earlier tracks.

When I first heard Estranged, I knew I wanted to review it. It covers a lot of ground for such a cohesive collection, suggesting it’s just the tip of the iceberg for what Lisa can accomplish musically. And if you look into her background, from her days in various bands and her previous solo work, you’ll see she has already established a great deal of musical depth and breadth. So if you’ve only just newly discovered Lisa Said, as I have, there’s some back-catalog solo work to explore while enjoying this EP and awaiting what comes next.

The only upcoming show listed on the “Events” page of Lisa’s website is tomorrow, August 15th at the Black Cat in Washington, DC. (Here’s the Facebook event page for the show.) This is music that should translate exceptionally well to a live show, so if you’re in DC, try to get out to tomorrow night’s show. And keep an eye on her website for upcoming gigs.