I don’t often review cover bands. Not because I have anything against cover bands, though. Back when I published Geoff Wilbur’s Renegade Newsletter, particularly in the local editions of that publication, I reviewed a broad cross-section of local live music performances, and you can find some amazing musicians in cover bands who’ve simply chosen to take their music another route, whether earning a living on the cover band circuit or performing as weekend warriors while balancing solid non-music careers and family responsibilities. And I love hearing my favorite songs performed live by great musicians. 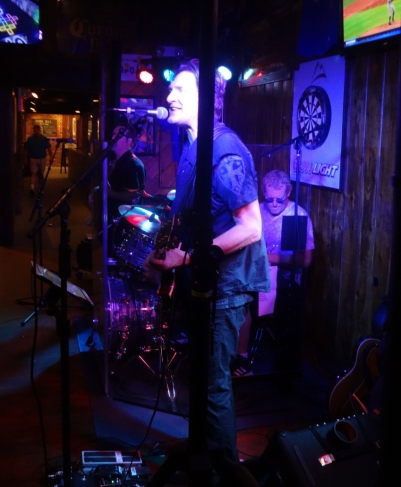 These days, though, I don’t get out as much. I devote my handful of album reviews each month to talented bands producing amazing music, and I often spend my handful of nights either going to see targeted favorite artists or to see earlier sets. And while I might find an acoustic cover artist in an earlier time slot, cover bands rarely begin before 9:00, often a bit later (even if they’re scheduled to start at 9:00). Because of that and the robust original music scene in this part of the country, very few cover bands grace the Blog‘s pages.

But last night, an extremely talented old friend of mine performed with his band, The Chills, just a few miles from my house. In fact, if you read the “about” portion of the band’s Facebook page, you can see the exceptional pedigrees of the musicians in The Chills. Bonk Coelin (drums, vocals) has performed with The Bruce Marshall Group, The First, Viper, The Cherries, and Overstreet. Stephen “Sharky” Beccia (bass, vocals) was in Anxiety, Busted Allie, Cement, Frantic City, Robbin Banks, Uncle Wally, the Jenny Aia Band, Kate Russo, and One Eleven (111). And you may know David Allyn Steele (guitar, vocals) from the original Boston Brats, Trash Broadway, Love It To Death, and HatTrick (in which Bonk was also a band member). When I was just starting my journalism career in Boston, Trash Broadway was a fixture on the local music scene, with the band’s Torrid/Important Records album, a record produced by Chris Anderson (Cheap Trick, Todd Rundgren), placing it just one stepping stone away from international stardom. In any case, my familiarity with David led me to The Chills, and their performances are always an opportunity to enjoy a great night out. Cover songs performed by some of the best musicians out there.

The Chills’ set list – I stayed through the first set and a couple songs into the second – included a lot of songs you’ll know, rock tunes that reached popular consciousness in their day, most of them dating back to at least 20 years ago. They kicked things off with a rockin’ number, The Black Crowes’ “Hard to Handle.” From there, they adeptly worked their way through a plethora of crowd-pleasing favorites.

Other songs that impressed me the most during the initial set were Modern English’s “I’ll Melt With You,” Queen’s “Crazy Little Thing Called Love,” and a particularly good rendition of “Sweet Home Alabama,” a song whose structure lends itself to some subtle guitar noodling, adding a little texture to the song in a way that’s not really noticeable unless you’re paying close attention, but it’s the sort of thing an exceptional cover band does to make its music just a little more interesting, one of the main reasons to seek out a cover act with the talent to add that extra flair. The Chills also delivered (to an obviously appreciative crowd) several other tightly-delivered tunes covering a broad spectrum of rock ‘n roll favorites, from “867-5309” to “Superstitious,” from “Your Mama Don’t Dance” to “Fooled Around and Fell in Love.” They closed the set with another of their more exceptional efforts, a rousing rendition of Grand Funk Railroad’s oft-covered “Some Kind of Wonderful.”

I only stayed a couple songs into the second of The Chills’ three sets last night. They kicked the second set off with Billy Idol’s “Dancing With Myself” and followed it with the Stones’ “Honky Tonk Woman.” I’m sure the variety continued after I left. While I called it an early evening, the band and the Bolton Street Tavern’s room full of revelers continued well into the night.

Indeed, The Chills are one band that’s well worth making an extra effort to see when you want a night out, surrounded by rock and roll favorites. I don’t see any upcoming shows currently listed on the band’s Facebook page, but obviously keep checking. I often see their events pop up elsewhere before they mention them on Facebook. In addition to the Bolton Street Tavern, I’ve seen The Chills booked a few times at The PPC in Chelsea and Chopsticks in Leominster. In fact, on Chopsticks’ website I see The Chills listed on September 22nd and 23rd. And while the PPC doesn’t have any upcoming events listed on their website, a Facebook search turns up a Chills performance there on September 30th at the PPC (per this Facebook event). Obviously, as those dates approach, confirm with the venues.