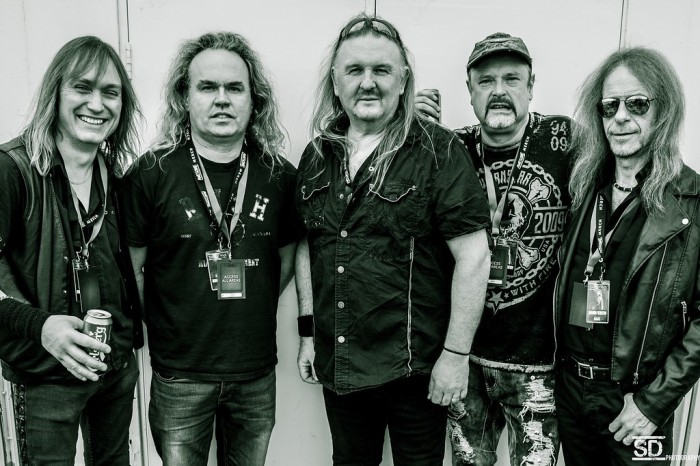 It didn’t take long for me to realize Burnt Out Wreck is a band we all need to know about. I was contacted by someone connected to the band, who suggested I listen to “Swallow,” and ten seconds in I was hooked.

Burnt Out Wreck performs speaker-rattling ’80s-style melodic hard rock/heavy metal rooted in the ’70s hard rock classics. Swallow would have been one of the ten best albums of 1987. And if you still dig that kind of music, this album has to be part of your collection. I guarantee it will quickly become an old favorite.

The band itself has a bit of an ’80s pedigree. Frontman Gary Moat was the drummer for ’80s hard rock band Heavy Pettin’. The dude’s voice is ideal for this genre. And, of course, he surrounded himself with a tight band of talented instrumentalists – Adrian Dunn on guitar; Alex Carmichael on bass; Miles Goodman on guitar; and Paul Gray on drums.

The music has an obvious AC/DC influence. Rough, raw, ragged, and rockin’. But the other group I’m most reminded of is Thunder, and that’s likely due to the blues-rockin’ tuneful swagger. Burnt Out Wreck lies somewhere in the middle, incorporating elements of other rock ‘n roll luminaries, all within the auspices of an identifiable Burnt Out Wreck sound.

The opening riffs of “Burnt Out Wreck” quickly remind me of Ratt’s “Wanted Man.” “Swallow” actually stylistically reminds me most of a Legs Diamond song after a few listens, though AC/DC was my first thought. And “Pulling It Out” is lyrically akin to a Scorpions tune with its song-long repetition of a couple phrases.

You’ll recognize the best of the eighties – and some nuances that have been perfected by these very same hard rock bands in the decades since, for those who have continued to follow them. In that vein, “Talk About Love,” for example would be a great ’80s hard rocker, catchy with crunchy guitar lines and big hooks. And the song that has developed into my personal favorite, eventually usurping “Swallow,” is “Medusa.” As with “Swallow,” it’s initially catchy – I was singing along by the end of my first listen – and it features a terrifically hooky guitar line. This could, in fact, be a Thunder song. (Give it a close listen.) And the thing about Thunder’s best songs is that they stay with you, digging their way into your brain, popping out sometimes days after the last time you heard them.

If I were to direct you to three potential monster hits (at least if you were programming an ’80s rock radio station), I’d suggest the aforementioned “Medusa,” for those very reasons I detailed, “Swallow” because of its builds-to-power and well-placed guitar hooks, and “Pulling It Out,” a repetitively catchy, high-energy song to which you’ll find yourself singing along “She’s always pulling it out/I’m only sticking it in.” Yeah, ’80s hard rock, what they were referring to as metal at the time, though I’d’ve added a key word and called it melodic metal. These days, I usually refer to it as melodic classic hard rock.

Really, though, those tunes are my favorites. You’ll probably have others. And I guarantee the shredding guitar riffs at the beginning of “She’s a Dirty Love” will hook a few of you; indeed, that’ll probably be a lot of guitarists’ favorite. The closest the album comes to a ballad – it isn’t, but it almost soars in spots, and if you had to slow dance to one song on Swallow, this is the only song that might almost work – is “Your Love (Is All I Need).” The sparser instrumentation allows the guitars to run a little and Gary’s vocals to stretch out a bit with an insistent edge to them.

Wherever you turn within Swallow, the hypnotic heavy rhythm and catchy guitar lines are album staples. And I’ll reiterate: Buy this album! Play it a few times alongside your ’80s hard rock favorites and you’ll soon forget this album was released 30 years later. I’ve absolutely loved having this disc in my review queue while working on its review, and I guarantee several of these songs will find their way into regular rotation on my smartphone playlist. (Indeed, one came up on shuffle just a couple days ago.)

The “tour” page on the band’s website mentions a few upcoming gigs. On Friday, September 15th, Burnt Out Wreck will be supporting former AC/DC drummer Phil Rudd at The Underworld, Camden (London). The band has a Monday, October 9th gig at The Stables in Milton Keynes; a Tuesday, November 14th gig at The Robin 2 Venue, Mount Pleasant, Bilston; and a Thursday, November 30th show at The Ferry, Glasgow. They also list an appearance at Hard Rock Hell Camp in North Wales, November 9th-12th.  Obviously, as always, check the band’s website for new shows as they’re added and check venue websites to confirm details.

One thought on “Album Review: Burnt Out Wreck – Swallow”