Following on from their critically acclaimed self-titled debut album Cain Rising, the band have been back in the studio to record new songs for release on this 5-track EP Rear View Mirror, out today, October 10th, 2017. All the songs have been released as singles over the past few months providing exciting glimpses, one song at a time, of what the band have been working on.

Where the debut album displayed the breadth of their influences, from East Coast rock to raw folk, the five tracks on Rear View Mirror show a band whose confidence is growing and who are not afraid to let their music grow with it.

Since we last heard from Cain Rising, there have been some personnel changes. The core of Jo Parry, Jez Parry and Jimmy Price remains. Incoming guitarist Ian Hopper is edgy and creative; Matt Crawford on Hammond and piano gives the band a touch of soul; and Mick Ivory’s drumming is its beating heart.

The title track of the EP, “Rear View Mirror,” is an effortlessly catchy, hit the road, summer song that drives along from the opening chords to the mariachi outro. This is the first time the band have experimented with a brass section courtesy of Rebecca Gibson Swift and Pablo Mendelssohn.

“Glasgow City Spires” has the band rocking out behind lyrics reflecting the alienation that can hit you when returning to your home city after many years. It’s a feel good bouncy tune, with swirling organ, warm snappy guitars and a driving chorus.

“Soldier” takes the tempo back a touch with a real retro feel. A touch of Andy Fairweather-Low, a touch of The Hollies and an evocative Gretsch guitar solo. 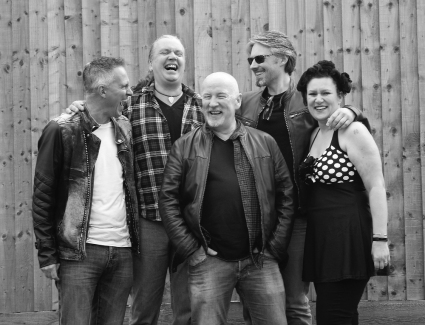 “Walk My Way” is a swinging rock tune. Once again adorned with horns plus a call and answer bridge in a Billy Joel “Innocent Man” style, which gives it all a foot tapping, bopping and breezy sway.

Finally the mood is taken down with “Social Man,” a tense, raw, stripped-back piano song. It’s good to be shown that the band have a versatility and confidence beyond the airy summer rock, and this track provides a perfect natural conclusion to the EP.

As well as the music, I should also mention that the drawing behind the cover art for the EP and singles is by Julian O’Dell. Julian’s artwork has long been a favourite of the band’s and has created a unique style for this release. His work can be found on his website www.artattackoncancer.org. All proceeds from his sales go to the Action Against Cancer charity.

My previous reviews of the first two singles from this EP (here and here) have extolled the virtues of this band. Now at last you can get the full EP. With these 5 tracks you get a satisfying, hit the freeway, window down, summer blast. Get up close and personal with a pair of headphones, though, and you’ll find an equally enjoyable and rewarding listen thanks to the great production – credit for which goes to Jamie Masters, who seems to be able to get right inside the band’s sound and bring out the very best of the songs.

Great tunes, great songwriting, great production, great band. If you like Springsteen, Dylan, Tom Petty, Beatles, et al, you should really listen to Cain Rising’s new EP and then go get the album for good measure. Here is a band influenced by the greats and who then turn their own creativity into new wonderful music for now and for the future.