Marina V is an international, award-winning singer-songwriter based in Los Angeles. Her music has been featured in television shows and movies. You’ve probably heard some of her music without realizing who wrote or performed it. She’s one of those L.A. artists, one of the performers who is one right place-at-the-right time away from being a household name. Suffice it to say, she’s exceptionally talented. Of course, I discovered her music and became a fan in much the same way you may be now, randomly finding a review or a music clip and, after a bit of investigation and song-sampling, realizing I had stumbled across someone special.

Longtime Blog readers may also recall that Marina was one of the artists I featured in the nine-part “Road Back to Music Journalism” series I wrote to launch this Blog in the fall of 2015. This CD and house concert review was item number five on my nine-part journey back. The follow-up to that album, Inner Superhero, is Marina’s new release, Born to the Stars.

Album Review of Marina V: Born to the Stars

Marina’s voice is strong and versatile. Her trademark is a quickly-identifiable, breathy vocal delivery, and many of her popular songs are the slow-tempo, soaring songs you’d expect to contain those vocals. A 10-song album format, however, can show her range and versatility, as she mixes rocker power and uptempo pop styles that reflect the variety of influences you’d expect from an artist with Marina’s clear star power – that transcendent quality you know is there but can’t quite pin down. Born to the Stars explores the rough-edged rocker influences, the pop hookiness, the hint of pop-danceable energy, all while remaining rooted in classical influences (she’s a pianist, after all) and folky traces that creep into her keyboard- and guitar-driven ballad and light pop-rock tracks. As is the case with so many of my favorite artists, Marina V has an identifiable core sound while incorporating a variety of influences.

The new album kicks off with power and authority, the initial release off the album (supported by a video sporting cameos from a lot of A-list [and B-list] musicians singing along to the music), the title track, “Born to the Stars” (featuring Árstíðir). Marina’s voice can be so sweet and crystal clear that it’s nice when she balances the softer songs with tracks like this one, a stadium-filling rock ‘n roll song with a vocal edge. There’s an ’80s pop flavor and an Imagine Dragons-esque soaring-music-wall roar providing the arena-caliber bigness, with Marina’s rich, tuneful vocal carving the melody weaving through the big sound. Indeed, this is either a concert-opener or an encore song, one that’s meant to bring a crowd to its feet. 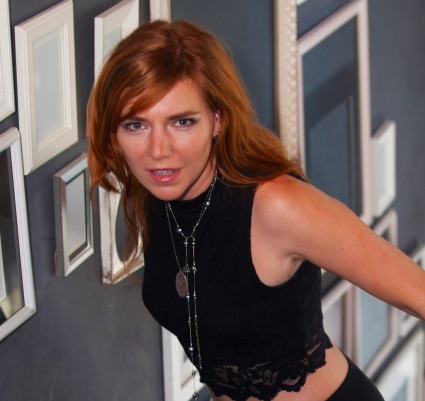 The following “I Am Iron” is a nice transition to the softer songs on the album. It’s edgy, with dance-pop/rock-type of power and some of the soft, sweet, clearly soaring power vocals just a handful of vocalists can pull off.

It’s that softening of the vocal the leads well into the ever-softer, more saccharinely-pleading “Be My Light.” The expressive, emotional vocals are extraordinarily classical in nature, as is the piano. You can imagine a music video with a grand piano, a mostly-empty ballroom with large windows, curtains flowing in the breeze, perhaps a starry sky outside. Yes, it’s one of those grand, big, sweeping ballads. Classical-driven popular music. 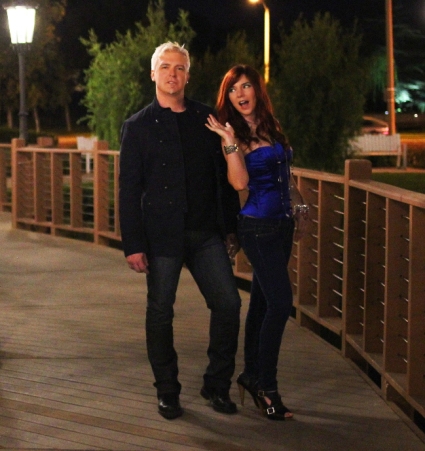 Next up is “Together Alone,” another favorite of mine, this one a folky soft pop swayer that serves as a commentary on the solitude of modern life.

And then the album gets super-ballady for a while, soaring behind Marina’s vocal power, all the while maintaining lightness and conveying tremendous emotion. “Fire in the Sky” has some of that booming pop-balladness (the sound that often recalls bands like Imagine Dragons for me). “Beautiful Forever” is so sweet, strong, and touching. “Good” has one of those big-empty-room, piano-ballady openings, which the richness of Marina’s soft vocal carrying the day as it displays both fragility and determined strength in support of its emotional message.

“Bring It On” picks up where “Good” left off, but this time sporting a rhythmic music bed of soft pop power carrying the emotional rises and falls.

“Autumn Song” is the Russian-language song in this collection. And perhaps it’s just me, but with the rhythm of the music and Marina’s pianowork, this makes me think of a song that might accompany a ballerina music box. Or perhaps, at a fancy costume ball, it might be played during a dramatic ballroom dance.

Marina closes the collection with a cover of John Lennon’s “Imagine.” The soft edges of her voice and the unique tempo Marina uses in her phrasings sometimes become most apparent when she covers other people’s songs, and they’re what make her covers truly unique, identifiably Marina V. This is one of those Marina V covers I enjoy immensely as its own song, even though the original is so iconic. (Her cover of Scorpions’ “Wind of Change,” which appears on her extended 2017 release of Inner Superhero, is another such tune.)

In the end, the rock ‘n roll power at the beginning of Born to the Stars and the softer, more balladic and slower tempo power that inhabits the middle and latter portions of the album result in a satisfying, beginning-to-end listen. They showcase the talent that has earned Marina a fair level of recognition within the music business and has garnered her music placement in video productions. You’ll wonder why you’ve never heard of her before. Of course, that’s the reason for this review – to introduce you to one of those top-shelf talents who’s still flying somewhat under the radar. Seriously, give this album a listen, sample some of Marina’s music. You’ll be glad you did.

I can also vouch for her exceptional live shows. Whether in an intimate setting or on a big stage, Marina V delivers a rock concert performance you’ll long remember.

Check out the “Tour” page of Marina’s website for upcoming shows, and check back regularly as she adds new dates. Currently, the only spring shows listed are an April 22nd afternoon gig in Woodland Hills, CA and a May 11th show (opening for Tiffany) in Big Bear Lake, CA. Marina’s summer shows scheduled so far are June 23rd at The South Bay Festival of the Arts in Torrance, CA; a June 24th “Concert at My House” (these intimate dinner concerts sound fun!) in Valencia, CA; and an August 3rd through 5th sequence of shows in Big Bear Lake, CA (3rd), Mesquite, NV (4th), and Las Vegas, NV (5th). Since I’ve been following her music the last few years, I’ve noticed that Marina plays frequently on the west coast, regularly in and around Illinois (where she got her U.S. start), and periodically books European tours. Catch her when you can, and on the rarer occasions you find her performing elsewhere, be absolutely sure not to miss her.

Marina also has a “2 Songs a Month Club” via Patreon. For as little as $1 per song ($2 per month), you’ll receive 2 songs each month. Of course, greater pledges earn greater rewards. Her club members received the Born to the Stars album when it was released. Of course, some of the songs were monthly releases along the way. Rather interesting was being able to witness a couple steps of the evolution of “I Am Iron” via the club. Once you’ve discovered Marina’s music, it’s a neat way to support a new favorite musician. She’s not the only musician doing this, but I really do like the approach of offering a new song or two each month, as Marina has adopted, as a Patreon format.

One thought on “Album Review: Marina V – Born to the Stars”