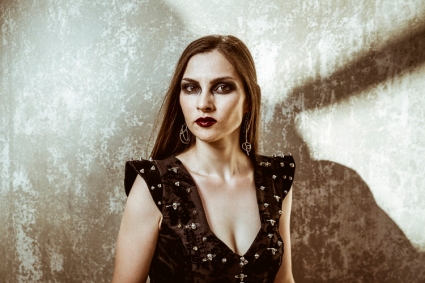 From the start, you know Persona means business, as they kick off album-opener “Prologue – The Initiation” with a serious metal growl, proving the band’s progressive rock musicianship is matched by its metal attitude. “The Omen of Downfall” and “Esuriance Guilefulness Omnipotence” continue in that strain, with nearly angelic soaring vocals interrupted by growls as the tunes enter into heavier territory from time to time, supported by a menacing musical backdrop.

The amped-up energy in “Esuriance Guilefulness Omnipotence” is carried over into “Armour of Thorns” via a less dense, energetic driving rhythm. I very much dig its rollicking tempo and baseline vocal melody, while musical explorations in the back half of the song add variety that keeps things interesting.

Still heavy and with some meaty, chunky guitarwork driving it forward in parts, the softer-touch “Netherlight” fits in nicely mid-album, though the opening growls of “Bete Noire” let the listener know the intensity is about to crank back up.

I’m running out of adjectives, but “Invidia” and “Hellgrind” keep the energy level up, with “Hellgrind,” naturally, the darker of the two.

The energy level sustains for the rest of the disc, with “The Seeress of Triumph” a back-end favorite, with its insistent rhythmic energy, driving the album toward its closing “Epilogue – The Final Deliverance,” a pleasantly low-key release of pent-up energy that carries Metamorphosis to its conclusion.

I’ve now reviewed two Persona albums, and it’s clear they’ve earned a place at the heavy progressive rock table (and concert/festival circuit), likely to appeal to a broad cross-section of fans spanning several rock/metal sub-genres. Truly inventive, progressive axework. Sweetly powerful and soaring vocals punctuated with rough-edged metal chops, replete with the requisite growls. And the songwriting skills to add variety to the song mix. I’m not sure which album is my favorite, Elusive Reflections or Metamorphosis, but I’d urge heavy prog-rock/metal fans to pick up one, play it awhile, and then grab a copy of the other.

Keep an eye on Persona’s concert schedule. There’s nothing listed on their Facebook events calendar at the moment, but watch for future shows. And maybe also sign up for the band’s newsletter via the bottom of their webpage to make sure you don’t miss out. If they make it to Boston one of these days, you bet I’ll be there. (As Europe has a better festival circuit, I imagine you’ll have better luck catching them live there, if you live outside the band’s native Tunisia.) Indeed, if you get a chance, Persona’s music is the sort of power rock assault you just don’t want to miss.