Claudio Simonetti and the band Goblin are synonymous with the horror and suspense film genre. The Italian Brazilian-born keyboardist and composer Simonetti began his career in Europe in the early ‘70s playing in a band called Cherry Five. That initial group eventually morphed into what became the progressive rock powerhouse known as Goblin. The band’s partnership with famed Italian film director Dario Argento led to a flourishing career creating soundtracks for his suspenseful crime dramas and supernatural horror films like Deep Red/Profondo Rosso, Suspiria, Tenebrae, and a host of others. Both with Goblin and as a solo artist, Simonetti went on to compose soundtracks for many other directors such as Ruggero Deodato, Umberto Lenzi, Lucio Fulci, Lamberto Bava, and Sergio Martino. 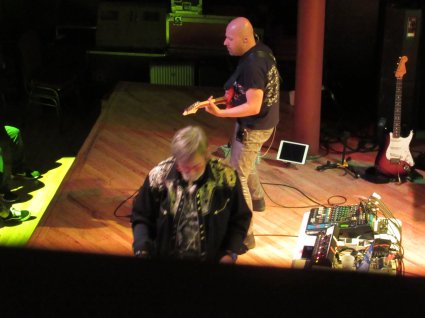 Just in time for Halloween, we bring you an up close and personal conversation with Claudio Simonetti, as the band is currently on tour for its third U.S. leg since 2013. We also offer a recent show review from their stop in the Detroit area that was a rare occurrence indeed. So, sit back and enjoy a few moments with one of the legends of progressive rock and the global horror and suspense genre.

Eric Harabadian: Can you clarify the significance behind the band’s title?

Claudio Simonetti: After many member changes over the years I have my own band doing Goblin music.

EH: So, after various personnel changes, it’s back to you leading the band. How long has your current lineup been with you?

CS: My guitar player Bruno Previtali has been with me 20 years. My drummer Federico Maragoni has been with me six months, and our bass player Cecilia Nappo a year and a half. This is the band that recorded our new album.

EH: Can you tell me about the new album?

CS: The album is called “The Devil is Back” and has 10 brand new songs. At the same time we did a “Best Of” album which contains some of the most important songs taken from films like Zombi/Dawn of the Dead, Profondo Rosso, Suspiria, and Tenebrae. They were released for our U.S. tour but are available on Spotify and all the streaming services. Physical copies of the albums will be released everywhere in November of this year.

EH: How did you meet and work with director Dario Argento?

CS: I met Dario Argento in 1975 when he finished the film Deep Red/Profondo Rosso. He was looking for a band to score his picture. We had recorded one album under a different name but with the same members. And we worked with a producer that was already working with Dario. So, when Dario asked the producer for a band, he first wanted to contact Pink Floyd or Deep Purple. But the producer said, “No, I’m producing these Italian guys, and would you listen to them?” And so Dario came by the studio and listened to our music, loved it and decided to have us do the music for Deep Red. That was our first film with Dario, followed by Suspiria. We were very lucky because we were very young, but it worked out, too, because the soundtrack sold 4 million copies. It was incredible. This was especially weird for a prog band like us in Italy. Pop music was mostly big there then.

EH: And, of course, you’ve done a lot of music that goes beyond just horror films. Can you briefly talk about your process when you write for a movie?

CS: In the beginning I talk to the director, and I see the film. And I start to write some of the music for the scenes. Sometimes the director has suggestions, or they give me the freedom to do what I want. But I work watching the film, never before.

EH: Who are some of the biggest artistic influences that have figured into what you do?

EH: How long has it been since you last toured with Goblin, and what has been the focus of this current tour?

CS: This is our third tour here. The first was in 2013 with different members. It was two from the original band and two from my band Daemonia. We did a second tour last year as Claudio Simonetti’s Goblin. Last year we played Suspiria, and this year Deep Red.

CS: Yeah, that will be a really good experience with a lot of big names. The band Yes is the main organizer of these gigs on a boat. I’m a big fan of Yes and grew up with them. It will be fantastic to be there. And we will be one of two Italian bands on the cruise. The other is Le Orme, another popular prog band from the ‘70s.

EH: You also worked with George Romero didn’t you?

CS: Actually, no. We did the soundtrack for Dawn of the Dead because Dario Argento asked us to change the music for the European version. I also did a vampire movie for Romero called Martin. But, again, I never did meet Romero directly. I finally did meet him in 2016, a year before he passed away. He was a very nice person. 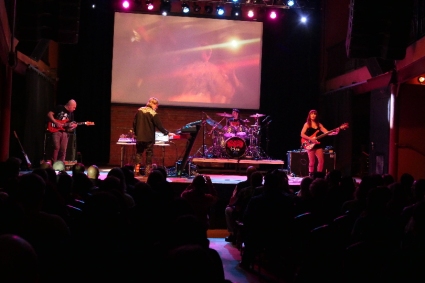 EH: Your music encompasses so many different elements. How would you describe what you do?

CS: Now, my music is progressive like the ‘70s, but with new sounds. Maybe there is more energy too. I had this band in 2000 called Daemonia that was the same stuff but heavy metal. Now I’ve turned back to the original music. I’ve done a lot of film music for Dario like Phenomena and Opera; that was just me without Goblin. So, when I play live I play Goblin stuff and my stuff.

EH: You’ve played all around the world. Where are some of your favorite places to play and why?

CS: Well, the United States, of course. But we’ve had a lot of success in Japan. I go there every year. We will be going to Japan soon for two concerts where we will play the score to the film Tenebrae.

EH: What has the response been from fans to what you do?

CS: Every show is different. But you know what surprised me more was that young people know this music. I thought only my generation would remember, but there are 20- and 30-year-olds that come with the records and want my autograph. It makes me give thanks to the internet, you know. I don’t think there is nothing special with a lot of new music. I think young people find something new in our vintage music. There is some great new music but the vintage bands like Deep Purple and Led Zeppelin are still the best.

EH: Well, I always felt your music has a timeless quality that spans generations.

CS: Yeah, many generations. My audience goes from 20 to 60 years old.

EH: So, is your emphasis now on performing live?

CS: Yes. I don’t work much with soundtracks now. I think it’s a bad period for films, especially horror because they tend to be low budget. I prefer to play live with my new and old stuff. It’s better for me now.

Capturing Claudio Simonetti’s Goblin live is a rare and cinematic experience. You certainly get your money’s worth. The band, in the midst of a multi-state U.S. fall tour, stopped in Pontiac, Michigan at the Crofoot Ballroom for a three-hour-plus extravaganza. The first two hours found the members of Goblin poised on stage, each with instruments in hand, as they diligently watched the screen tracking live the score to Dario Argento’s Deep Red. The 1975 murder/suspense/horror hybrid holds up all these years later, and the original soundtrack performed along with it adds to the film’s vibrancy. From the opening plotline development to the closing credits, watching Simonetti and the Goblin crew in action was a true joy to behold. It was a rare glimpse into the studio process where sound-to-picture aligns and comes alive. Deep Red’s story of musician and amateur sleuth Marcus Daly’s (played excellently by David Hemmings) search to find a psychic’s killer is advanced by the band in three dimensional audio. A lot of the music had a jazz-fusion quality to it that never sounds dated, even though Simonetti is performing music he originally scored for the picture over 40 years ago. During many of the set pieces, Previtali’s tasteful wailing guitar, Nappo’s hefty and lithe bass lines, coupled with Maragoni’s syncopated beats elevated the film’s images to greater heights.

One aspect of the first section of the concert with the film that was truly phenomenal was a scene where main character Marcus Daly is in a haunted mansion and looking for clues to a murder. As he begins striking a wall and attempts to bust through the plaster, drummer Maragoni fervently eyes the screen, matching drum hits to each strike of Daly’s hammer to the mansion wall. At that moment, one really felt like they were in the recording studio laying down the music cues to the film with the band. 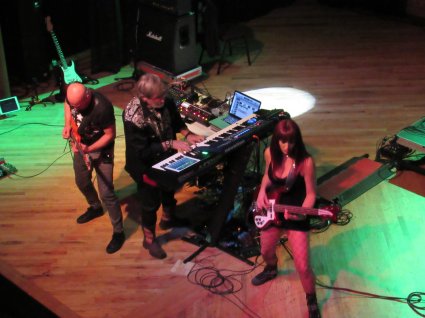 After the film portion was done, Simonetti and company played another hour of various instrumental pieces from a host of other Argento films like Demons, Tenebrae, and George Romero’s Dawn of the Dead. They also performed some brand new tunes from the album The Devil is Back. Smiles on stage lit up all around as Simonetti, Previtali, Nappo, and Maragoni locked in place and bounced all over the landscape, driving their unique brand of progressive rock and electronic-laced rhythms undeniably home.

Claudio Simonetti is truly one of the original masters of Italian rock and world class film scoring. Along with the new Goblin they bring a classic sound that should keep thrilling horror film fans, and just solid music fans, for some time to come. For more information on the band just go to www.goblinsimonetti.com.

Per the “tour dates” page on the band’s website, Claudio Simonetti’s Goblin will be in Kawasaki, Japan on October 25th and 26th and Berlin, Germany on October 31st, followed by gigs in Italy: November 1st in Lodi, November 14th in Pistoia, November 15th in Milano, and November 16th in Bologna. And they’ll be performing on Cruise to the Edge 2020, departing from Miami on March 27th, 2020.