Yes, you’ll know all of the songs. Or most of them, anyway. And we all know how cool popular songs can sound when exceptionally talented rockers give them a hard rock/light metal arrangement. This album does not disappoint. I always dig when hard rockers crank up the volume on covers of mellower tracks. When done well, you get… well, George Lynch & Jeff Pilson‘s Heavy Hitters.

Lynch and Pilson are joined on this album by Brian Tichy on drums and Wil Martin on lead vocals for most of the songs. Jeff Pilson takes the lead on “It’s the End of the World as We Know It (And I Feel Fine),” with Angelo Moore adding organ on that track. And Marq Torien provides vocals on “You Got the Love.”

The album kicks off with a delicious cover of Joan Osbourne’s “One of Us.” The big, open, slightly jangly sound of a George Lynch guitar opening is unmistakable, and the song builds slowly to power, pulling you in as you listen, loosening the reins just a little, and then delivering the goods with powerful guitars and vocals. Even though it’s a slow/mid-tempo number, it packs a huge punch and contains a dark, meandering guitar solo; it will soon be a favorite. 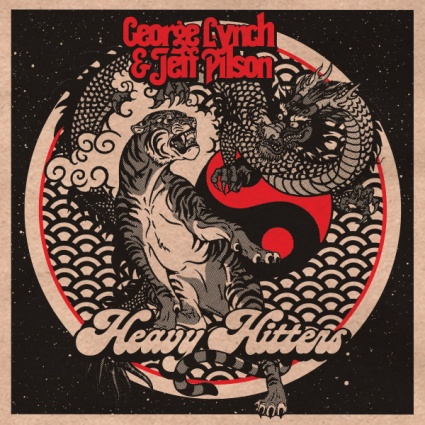 That’s followed by Lynch & Pilson’s renditions of Rufus and Chaka Khan’s “You Got the Love,” Carole King’s “I Feel the Earth,” Duran Duran’s “Ordinary World,” Madonna’s “Music,” OneRepublic and Timbaland’s “Apologize,” Martha Reeves and the Vandellas’ “Nowhere to Run,” Prince’s “Kiss,” R.E.M.’s “It’s the End of the World as We Know It (And I Feel Fine),” and Oasis’ “Champagne Supernova,” with Lil’ Richard’s “Lucille” as a bonus track.

Among those, in addition to “One of Us,” there are a few more standouts for me. (Your mileage – depending on your specific musical tastes – may vary.)

“You Got the Love” sounds like the sort of jammin’ funky metal you’d expect from Extreme – not the hits, the more adventurous album tracks.

“Ordinary World” is enveloped in one of those guitar-heavy music bubbles, with a little edginess in the vocals before hitting the big, open, feel-good chorus. Honestly, before looking at the album information, I forgot this was a Duran Duran song. With this arrangement, it seems more like something you’d hear from one of those ’90s post-grunge hard rock bands instead, though it was one of Duran Duran’s more guitar-rockin’ hits, so it didn’t need as big an overhaul as, say, “Rio” would.

“Music” is pretty true to Madonna’s original, except cranked up to eleven with Tichy beating the hell out of the drums, trying to knock them through the floor, keeping a heavy, steady rhythm, AM radio static-filled shout-sung-but-tuneful vocals from Martin, a notable funky bass bit from Pilson, and, of course, Lynch’s guitar wails. By the end of the song, you’ll forget the original wasn’t this heavy.

“It’s the End of the World as We Know It (And I Feel Fine)” is performed as a straight-ahead hard rocker, packing lots of oomph. And Lynch and Pilson mostly just add a full, rich, warm, rockin’ music base to “Champagne Supernova,” essentially turning it into the big-sound, six-and-a-half minute long slow-dance metal ballad on the disc… with the requisite late-song, super-long, shredding guitar solo, obvs. (Why do you think hard rock/metal guitarists are always so willing to do ballads?)

You’ll have other favorites, I’m sure, but those are mine. On the whole, this is a fun, really rockin’ album. George and Jeff have done a terrific job selecting songs that are well-designed for a hard rock/metal makeover. You know I love original music, but I also love super-original covers of great songs. If you do, too – especially when it’s George Lynch manning the axe! – grab a copy of Heavy Hitters.

When he’s back on the road, you’ll be able to catch George Lynch’s tour dates here at the “Tour Dates” section of his website. The George Lynch Fan Page on Facebook also does a good job of keeping up with him. You’ll have your choice between Jeff Pilson’s website and his Facebook page to keep up with his endeavors.