Single Reviews of Divine Astronaut: “Undone” and “Whither”

“Undone” was released as a single in late 2019, followed by “Whither” in the summer of 2020. These aren’t even Divine Astronaut‘s most recent singles, as “Voices” and “Ransom” dropped in the summer and fall of 2020, respectively, with a brand new video for the song “Only You”, showcasing perhaps DA’s softest side, joining them just a month ago. But “Undone” and “Whither” are the two MP3s that were sent my way last fall, and I’ve been enjoying in my playlist for several months now. So consider this an introduction to Divine Astronaut, and then go check out these two songs plus the group’s newer releases.

By “group”, I mean “duo.” Divine Astronaut consists of vocalist Livvy Holland and producer/multi-instrumentalist Moonhead. Livvy’s voice is that of a decade-spanning vocalist, while Moonhead’s music bed is a modern, buzzy, electronic wall of sound that simultaneously recalls ’80s New Wave and DJ-based modern electronic rock arena events. Indeed, the sound of Divine Astronaut is big enough, broad enough, and powerful enough to dub them an arena act, as it both fills the room and lends itself to the sort of light shows that would energize a stadium or a night sky. 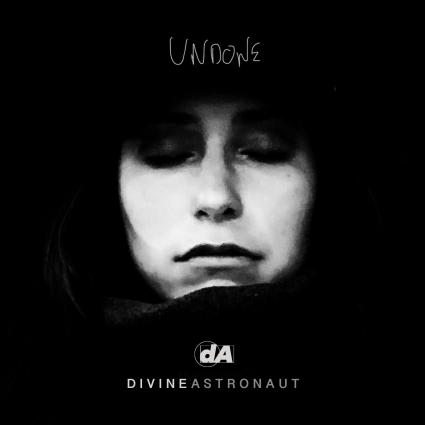 It’s not surprising that Moonhead has cited as influences producers Trevor Horn and BT, as well as bands including Portishead, Bjork, Enigma, Peter Gabriel, Massive Attack, NIN, and Radiohead. The Bjork influence coincides just a touch with Livvy’s vocals, particularly in the sparser moments of “Whither,” though just a little, as her vocals are big, textured, and powerful, even when she sings softly. Livvy’s voice can slice through the mist, the fog, and a seriously dense music bed, as she displays more on “Undone,” between the two songs.

Turning specifically to these two songs, which are a bit yin and yang, showcase different sides of Divine Astronaut’s musical capabilities. The vocals on “Whither” advance timidly, tentatively, almost uncertainly, accompanying an understated music bed that relies on subtlety to convey strength and power, including a nice little bit of synthwork mimicking a ’70s classic rock guitar run during a late-song bridge.

“Undone,” meanwhile, will light up the arena and get a sea of fans moving, as it starts quietly, merely hinting at the power about to be unleashed. In my memory between listens, I imagine remembering Livvy launch into some serious power as she sings “when it all comes down,” but it’s illusion set up by the music and her voice gearing up and crescendoing specifically as she delivers those lyrics. Moonhead’s synthwork is louder and crunchier on “Undone,” though it’s again illusory, as the music never really builds to the power it conveys. Though I like both of these songs, this is perhaps my favored of the two, though for personal reasons rather than musical ones, as it recreates an energetic, packed concert arena abuzz with excitement and noise.

Divine Astronaut has captured something special in the pairing of this duo’s talents, resulting in modern synth-driven pop-rock with broad-based appeal, music that’s cool, well-written, and performed exceptionally well, able to reach well beyond the band’s core set of listeners, offering the constant opportunity for breakout hits. On the Geoff Wilbur’s Music Blog spectrum, comparing Divine Astronaut to artists I’ve reviewed here at the Blog, I’d pair Divine Astronaut with ZagreuS and The Sweetest Condition, falling somewhere between the two but more likely to share a stage with ZagreuS.

An upcoming Divine Astronaut album, to be entitled Made Not in Berlin, is reported to be scheduled for a 2021 release, and I’m looking forward to hearing it. And catching a Divine Astronaut live performance. Whether in a large arena or a small listening room – hopefully with a great lighting system – I’d expect it to be an event.