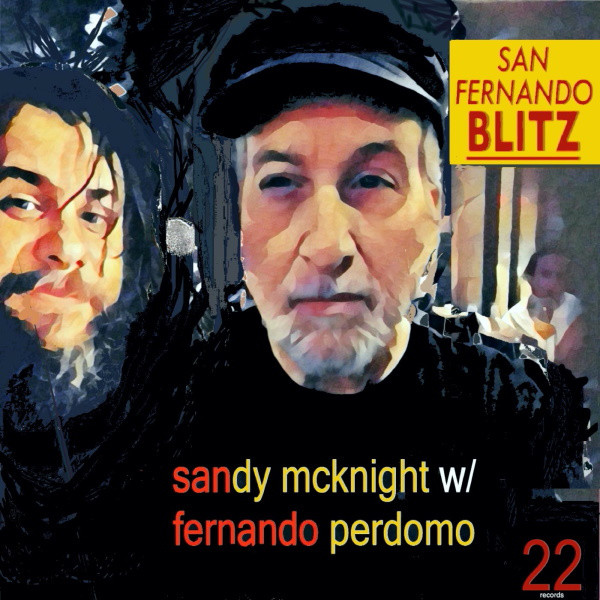 Sandy McKnight taps into that ’50s/’60s rock ‘n roll vibe much like bands like Weezer did with hits like “Buddy Holly” in the ’90s. With elements of the Beach Boys and probably many of the influences indie pop singer/songwriter Richard X. Heyman taps into to create his timeless pop-rock music, San Fernando Blitz is an album of well-crafted rock ‘n roll that’s guaranteed to entertain multiple generations and is certain to age well.

On this disc, Sandy’s joined by Fernando Perdomo. You’ve read about guitar-master Perdomo before at Geoff Wilbur’s Music Blog before, specifically when we reviewed his album The Golden Hour a few years ago. It’s a pairing of talent that’s likely to produce exceptional music, and, indeed, it does.

This really is a charming throwback almost. All six songs are less than 3 minutes long, and they’re like their own individual slices of rock ‘n roll sunshine, bright and cheerful, kind of what you’d think Randy Newman might write for a modern retro rock ‘n roll band.

“Living on the West Side” opens things up with a hooky cheerfulness. “C’mon C’mon C’mon” follows by adding a hint of California surf rock to the mix, punctuated by noticeably fun guitar noodling.

“Melody Anne” is the melancholy sock hop number of the disc. “Pay It Any Mind” has a similar vibe, but opens with a quick burst of guitar and a neat little bridge solo, while also sporting some subtly hidden guitarwork that keeps the tempo moving along nicely.

“Why Make Promises?” adds more modern, progressive guitarwork to the mix, coupled with a more emphatic – what would possibly pass as explosive on this laid-back disc – vocal line. This song softly soars, as if dancing on a grassy hill overlooking the ocean, metaphorically speaking. And since this whole EP has an old-time California rock ‘n roll feel, that’d be the Pacific Ocean.

“Seven Words” adds a little more wall-of-music feeling to the mix atop a strong rhythm that bounces more than it sways. The guitar has a little more crunch, too. Though not significantly different from the overall feeling of the disc, “Seven Words” ends the collection with a little more power than found elsewhere. Not much, just a little. Just enough to nudge you toward to decision of moving on to the next album or repeating this one, both reasonable choice.

In its totality, San Fernando Blitz is a fun, short EP. It’s a bright, cheerful, throwback rock ‘n roll excursion and a welcome collection to my listening library.

You can find Sandy’s upcoming live performances on the “Events” page of his website.

Fernando’s a busy dude, and rightfully so. I’ve seen his name attached to two other projects just since I added this EP to my playlist. I don’t see a live gig listing on his website, but Fernando does have an “Events” tab on his Facebook page.