Classic hard rock from a bunch of veteran musicians who know how to make great music and still love rockin’. With that recipe, you just can’t go wrong. The new album from Cactus, Tightrope, hit stores on April 2nd. It’s album-oriented rock that straddles the ’70s and ’80s styles, with screeching guitar solos, instrumental mid-song jams, high-pitched vocal wails, a significant blues influence, and the inimitable drumming of Carmine Appice.

Cactus was an early 1970s classic rock band, founded in 1969, that released three albums from 1970 through 1974. An incarnation of the band continued to perform in the later ’70s. The band then disbanded until 2006, when it was resurrected by its original drummer, rock legend Appice. On this album, Appice is joined by longtime members Jimmy Kunes on vocals and Randy Pratt on harmonica. They’re joined by new members Paul Warren (lead guitar, vocals) and James Caputo (bass). Guest appearances are made by legendary rock vocalist Phil Naro (whose music I used to review regularly back in the ’90s when I published Geoff Wilbur’s Renegade Newsletter) and original Cactus guitarist Jim McCarty.

Beginning to end, Tightrope reminds you why that era of rock ‘n roll is timeless – why it persists to this day and was the foundation upon which the rock ‘n roll of my teens and twenties was built. With Tightrope‘s tricky beats, heavy rhythms, and sidewinding ways, Cactus also proudly displays the heavy blues influence that underpinned its lane of the ’70s classic rock superhighway. 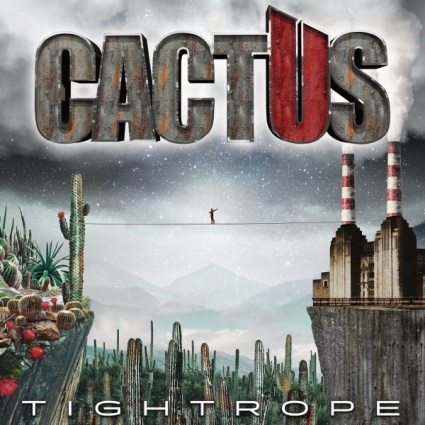 Album-opener “Tightrope” kicks things off with grinding guitar, stop-start rhythm, and edgily insistent vocals. Very classic ’70s rock with an uneven beat that stops each and every groove just as it’s getting started, purposely delivering an uneasily energetic ride balanced on a (as you may have guessed) tightrope.

The band takes that edginess into its next song, a growling, bluesy-wailing, juke joint-recalled rendition of “Papa Was a Rolling Stone.” Yowza, what a kickass cover!

“All Shook Up” begins all jangly with hints at Beatles-esque harmonies before digging in with crunchy guitars and a slightly gritty blues rock vocal wail.

“Poison in Paradise” follows, a slowly thumping, testifying, sad blues number, positively dripping with despair and regret. It’s a sign of the depth of the blues’ influence throughout this record that such a pure rockin’ blues number slips so nimbly into this collection.

“Third Time Gone” restores the energy, with a scene-setting blues rock harmonica piece helping get things rolling and steering the song, with some energetic fretwork that’ll appeal guitar aficionados, and a kickass, harmonica-accompanied Carmine Appice drum solo toward the end.

“Shake That Thing” is another heavily thumping blues-heavy rock number, followed by “Primitive Touch,” which leans back into the sort of off-balance rhythm that’s the opening title track’s calling card.

“Preaching Woman Man Blues” returns the collection to the blues fold – in this case that of the relentlessly rhythm rockin’ blues variety – interestingly after an intro that seems significantly more classically-driven than blues-based, the first such strong appearance on Tightrope, though it’s pretty brief; still, it serves perhaps as foreshadowing that a bigger style variation might await.

But not yet. Indeed, the next track “Elevation” thumps away, as drums-and-harmonica driven as “Third Time Gone,” though with a vastly different rhythm line. I’m also quite fond of how “Elevation” ends so suddenly in a very live rock ‘n roll way.

Next is the longest song on the album. It’s one of my favorite 7-plus minute songs, a rarity for me as I tend to get antsy somewhere between four or five minutes. Indeed, “Suite 1 & 2: Everlong, All the Madmen” has some progressive rock leanings, and that’s not primarily a reference to it’s length; rather, my comparison is due to the song’s meandering ways. There is, in fact, a break point halfway through that serves as a dividing line between the “Everlong” and “All the Madmen” portions of the song, a great transition that rescues you, sonically with a bit of a circus or carnival musical flair, just as you think you’ll never get the hauntingly gurgling, otherworldly chorus of “Everlong” out of your head. It’s an inspired sound pairing, one that continues to improve after repeated listens.

“Headed For a Fall” picks up the tempo and delivers Tora Tora-esque blues rock that feels as if it’s delivered with a wink and a smile.

“Wear It Out” closes the disc with another slightly stylistically different take on the blues-rock that permeates Tightrope. As if a nod to the ’80s heavy rock that paid homage back to its ’70s roots, this is a song with a vocal line that might be found in a Honeymoon Suite song, though it might be some of the instrumental stylings that leads me to that comparison. Still, it’s dipped in and dripping from a purer blues and blues rock pedigree, augmented by judicious harmonica use and, as everywhere on this Cactus disc, driven by Carmine Appice’s intense rhythms that are simultaneously complex and straightforward, as only few drummers can accomplish.

I struggle to choose a standout track, with a different favorite upon each listen (but only just barely). “Suite 1 & 2: Everlong, All the Madmen” is always toward the top for me, in part because it’s such a unique song, but rarely number one. Simply put, this is a solid, cohesive collection of classic blues-based hard rock that’s an enjoyable listen every single time. My favorite way to experience Tightrope is beginning to end; I’m guessing that’ll be your favorite way, too.

There’s a “Cactus on Tour” page on the band’s website, but it’s currently devoid of dates. Be sure to check back periodically.