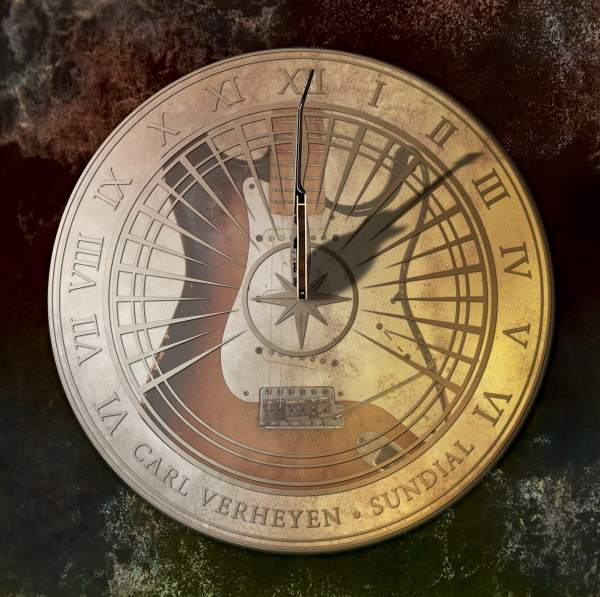 There was a time when more rock ‘n roll albums blended catchy melodies and progressive guitarwork, energetic hook-driven tunefulness and meandering noodling, rock ‘n roll with both a soft touch and a musical passion. Carl Verheyen‘s Sundial harkens back to those ’70s and early ’80s albums on which rock music wasn’t as stylistically compartmentalized, especially when featuring a lead axeman capable of such guitar wizardry as Verheyen.

Carl kicks things off with the fun title track. “Sundial” recalls a Stranger-era Billy Joel tune, but with progressive rock-style guitar occupying the solo and bridge slots, constrained within the package of a broad-appeal pop-rock song. It’s a very cool, groovy, cheerful tune with a great big sound.

The cheerfulness carries on into the following song, the bright, happy, energetic guitar instrumental “Kaningie,” a song with a catchy beat and plenty of character. Something about the energy of this track reminds me of the sorts of energetic instrumentals Bob Malone sneaks onto his albums, daring you to notice – rarely on the first listen – that there weren’t, in fact, any lyrics.

You can hear the funk meet the blues in “Clawhammer Man,” a true ’70s-styled funk-rock attitude-filled gem.

“Never Again” seems like a song you might have heard from Styx. A forceful musical beginning opens into a softer, lush, musically smooth chorus. If it were a Styx tune, I’d expect a faster tempo, while “Never Again” has a more blues-based, takin’-its-own-sweet-time vibe, but the blend of guitar and organ mix and verse-to-chorus transition “well, never again” recall something one might expect from the aforementioned Second City rock heroes.

“Garfunkel (It Was All Too Real)” maintains that same laid-back tempo, but it returns to a style in the neighborhood of late ’70s radio-friendly soft rock, recalling those nostalgic numbers that seemed to be telling a story in black and white. This track features plenty of keyboard but also leaves ample room for Verheyen’s guitarwork to dance through the melody, as well it should.

Verheyen cranks up the energy again on his cover of the Rascals’ “People Got to Be Free.” Mixing a ska rhythm, a faster-than-the-original tempo, and overriding rock guitar lines and vocal wails, this fun reimagination comes across as a completely different song than the original.

Next up, “Sprial Glide” is a tightly-structured, well-composed, mellow, progressive soft rocker, a 7-minute epic with recurring note-bending guitar and keyboard hooks holding it together before and after the mid-song guitar solo. “Sprial Glide” is the sort of musician-based masterwork you think of when you hear the phrase “album-oriented rock.”

“No Time for a Kiss” is the last full-length song on the album, a progressive rock-flavored not-quite-ballad designed to showcase a melancholy wailing guitar line that complements the similarly-pained vocals.

The last track on the album is the minute-and-a-half “Sundial Slight Return,” tying the album together with the instrumental melody of the opening track, putting a bow on the release as you’d expect from a thoughtfully assembled album. Also, coincidentally, it offers an opportunity for prepare you mind to return to song number one, particularly helpful if you’re playing Sundial on repeat. And why wouldn’t you?

Carl has a lot of gigs scheduled this summer and fall, beginning in Westlake, CA on August 29th, followed by September 4th and 5th gigs in Seattle, a couple more California shows, and then a European tour. You can find details about upcoming dates on the “Tour Dates” page of Carl’s website or on the “Events” tab of his Facebook page.