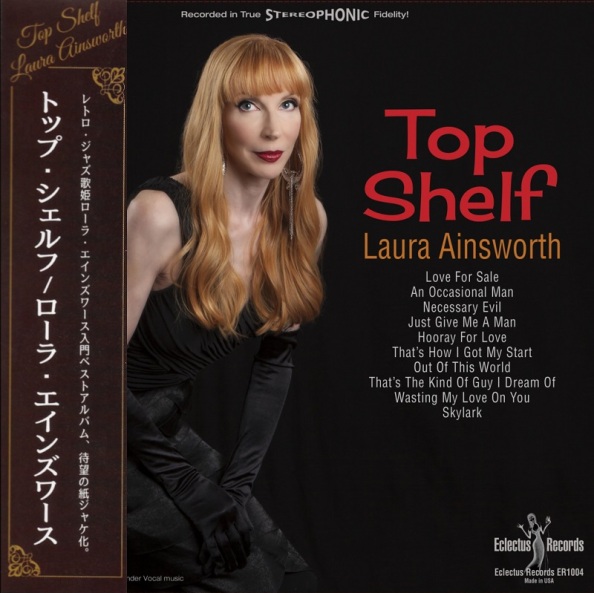 Vocalist Laura Ainsworth hails from Dallas, Texas and is a contemporary artist who is a brilliant interpreter of song. She’s kind of a Great American Songbook revivalist on one hand, but that would only tell part of the story. Her keen sense of style and sharp wit allow her to take established musical gems and rare nuggets and infuse them with a heavy dose of irony, humor, charm and candor. And her gossamer phrasing brings a unique personality to each song where she makes it her own.

Top Shelf is a deluxe packaged collection of the best from her previous independently released albums Keep it to Yourself, Necessary Evil and New Vintage. Courtesy of Japanese distributor Ratspack Records, this vinyl and CD formatted release features extensive liner notes and lyrics, previously unreleased tracks, beautiful photos, and detailed information on the songs and the wonderful musicians who make them leap out of your speakers.

The track list rundown begins with the pseudo-autobiographical adaptation by Frank Loesser and Victor Schertzinger called “That’s How I Got My Start.” It’s a slow and somewhat mid-tempo ballad that sets the pace for her unique and infectious brand of irony-imbued humor. Producer/arranger and pianist Brian Piper leads a lightly swinging ensemble as Ainsworth sings, “Prove it by my rich old banker, how I made that banker hanker. So let this be a lesson, keep ‘em guessin’. ‘Cause that’s how I got my start.” She really lays on that whole femme fatale/jezebel act pretty thick from the get-go.

“Necessary Evil” was an early ‘50s song by singer Frankie Laine that is fairly obscure. But being a musical archivist and curator is Ainsworth’s passion, as she invests this cool little known noir-ish burner with a sultry and seductive kick. Chris McGuire’s smooth tenor sax sets a vintage nightclub mood.

The redheaded chanteuse is in search of the ideal man on another early ‘50s rarity “That’s the Kind of Guy I Dream Of.” She sings tongue in cheek lyrics, with tales of romantic woe such as, “A handsome hunk o’ fellow with the sharpest clothes, a sunny disposition and a smile that glows. That’s the kind of guy I dream of, you should see the kind that I get.” And then she hits you with the clincher, “Got a guy, says he’s a jockey, took me to see his thoroughbred. You guessed it, of course, he looks just like his horse, I shoud’ve stayed in bed!”

Another lesser known Rodgers and Hammerstein song was tailor made for Ainsworth and bluntly called “The Gentleman is a Dope.” Although rooted from a bygone era, It smacks of modern #MeToo sensibilities, with a hint of sarcasm and sass. The small combo sound, with Piper at the helm gives this a minor urgency.

One of the unreleased tracks on the album is an Irving Berlin tune, popularized by Marilyn Monroe, called “You’d Be Surprised.” It’s significant that Ainsworth decided to include it here because it really displays her innate ability to tell a clear and intriguing story. It references that old phrase about never judging a book by the cover. In the case of a shy guy named Johnny, that would certainly apply. “He’s not so good in a crowd, but when you get him alone, you’d be surprised. He isn’t much at a dance, but when he takes you home, you’d be surprised,” she sings. “He’s got the face of an angel, but there’s the devil in his eye.”

“Love for Sale” is a classic Cole Porter song that has been done up tempo by Mel Tormé and a ton of other people. Ainsworth’s version really stands out as slow, steamy and resonant. The tight combo fronted by Piper’s cool and lithe piano playing really set the scene here.

“Skylark” is a familiar standard that, not only stands out for its beautiful lyrics and stellar vocal delivery, but the singular accompaniment of Chris DeRose-Chiffolo on guitar is mesmerizing. The medley of “Long Ago and Far Away” and “You Stepped Out of a Dream” is a lovely pairing in that they harmonically fit like pieces of a puzzle. Chris McGuire’s tenor sax work is just icing on the cake.

“An Occasional Man” was a minor standard sung in the past by legends like Sarah Vaughn and Julie London. Ainsworth and company give this a silky samba feel, with fun-filled lyrics like “I got an island in the Pacific, and everything about it is terrific. I’ve got the sun to tan me, palms to fan me and…an occasional man.” This vivacious crooner really knows how to paint a picture!

The Johnny Mercer/Harold Arlen piece “Out of This World” is rather exotic and a nice slice of post-modern world beat-influenced fare. Pete Brewer’s flute and Steve Barnes’ percussion really make this one sparkle. “Hooray for Love” is another Arlen gem that keeps that up beat and free-spirited take on love and romance in full gear. It’s a bouncy and swinging tune.

Johnny Burke and Jimmy Van Heusen’s danceable “Personality,” Ned Washington and Victor Young’s delicate “My Foolish Heart,” Gus Kahn’s hopelessly romantic “Dream a Little Dream,” and bonus tracks “Wasting My Love On You” and the randy “Just Give Me a Man” complete this fabulous and comprehensive CD package.

Just FYI, the CD edition of Top Shelf adds numerous tracks from the three studio albums that had to be left off of the vinyl LP edition due to the limitations of the format. But, whether you purchase the fuller length CD or the vinyl version, you’re in for a real treat. Laura Ainsworth is one of the most talented and entertaining vocalists – of any genre or era – on the music scene today!