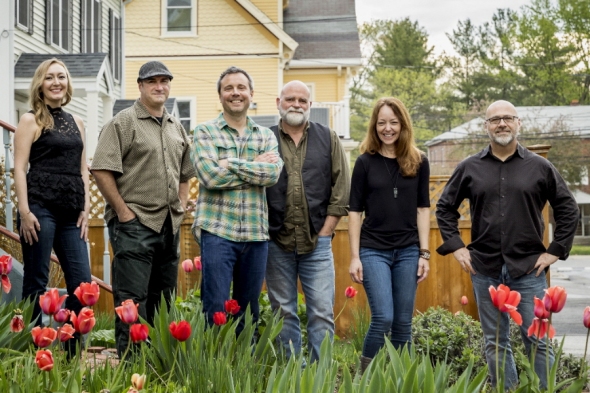 After checking out The Stacking Stones Band’s music online a while back and identifying them as an outfit I wanted to see live, I caught (and reviewed) them at Arlington Porchfest this spring. It was during the run-up to that gig I discovered they were working on this album, and I’ve been looking forward to reviewing it ever since.

Mid-tempo, smooth, easy-to-listen-to classic bluesy rock. The Stacking Stones Band is so deceptively precise it makes the music sound as if it almost comes too easy; the band’s music is instantly comfortably familiar. Whether background music during dinner, road-trip or commuting car music, or in a concert setting receiving full attention, this band’s music and performance style are the sort that can easily integrate into listeners’ lives. The seven songs on The Stacking Stones Band’s eponymous album are straightforward, original and exceptionally well-performed. The band does nothing earth-shattering, but they do it well. The Stacking Stones Band is a tight outfit performing well-constructed, straight-ahead bluesy rock. 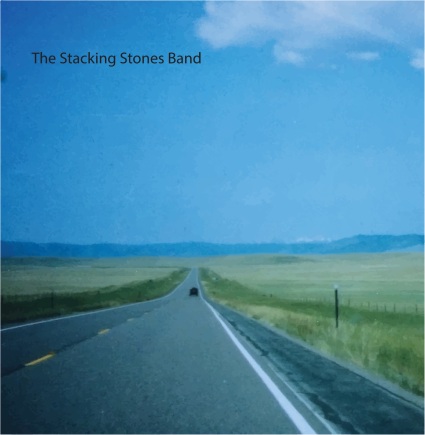 “Can’t Shake the Feeling” kicks the record off with a familiar rock ‘n roll rhythm, slowly building, adding crisp vocals first, then the rest of the band jangles its way into the party.

“Roses” was the first track to stand out to me from this collection. The verses flow along comfortably, so when the band features slightly greater energy in the chorus, a neat little guitar line, and slightly soaring vocals, though they’re still pretty relaxed, they stand out as a catchy hook. Add in some comfortable horn-work, and it’s a song you’ll remember.

“So Familiar” follows with a seventies soft rock almost Eagles-ish guitar line, a lying-back-in-a-hammock, peaceful, easy (see what I did there?) tempo, topped by a smoothly bluesy vocal, augmented by an ever-so-relaxed, perfectly-paced sax bridge. If this song doesn’t bring your blood pressure down while putting a smile on your face, nothing will.

“Lightning Rod” introduces some edgy funky blues to the mix. 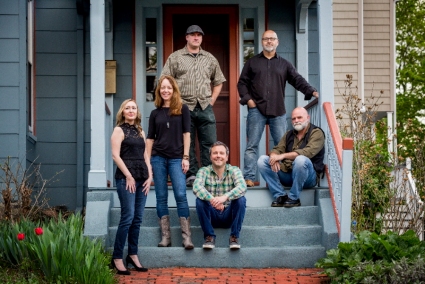 It’s followed by what has become my favorite song on the disc, “Waste My Time.” A classic, low-fi blues-rock guitar line pulls the listener in as the song builds. ’60s rock-flavored, almost-psychedelic bridges and chorus offset the cheerfully energetic, guitar-powered verses. It’s a cheerful slow-build that eventually pays off in a late-song guitar solo before settling down just a bit. In all, it’s a fun journey driven by that hooky, crunchy guitar line.

“Las Cruces” carries a similar guitar signature, but it proceeds at a much more mellow pace. The song and its more specifically bluesy guitar riffs, matched well to slightly rougher vocals, give the impression of an open road in mirage-creating heat, wide-open like the picture on the album cover, though with some heat-driven blurriness.

The disc ends with another of my personal favorites, “You and Me.” This track brings the album to an end with a light, energetic cheerfulness. Jangly guitars, vocals with a hint of blues, and playful musical transitions that are somewhat Southern rock in nature. This is the one you’ll find yourself singing along with, rocking coolly, head bobbing with your shades on, to “you and me on the run.”

The Stacking Stones Band will be performing at Sally O’Brien’s in Somerville, MA on Saturday night, October 14th. Keep an eye on the “Upcoming Shows” tab of the band’s website and the band’s Facebook page for future live performance information. 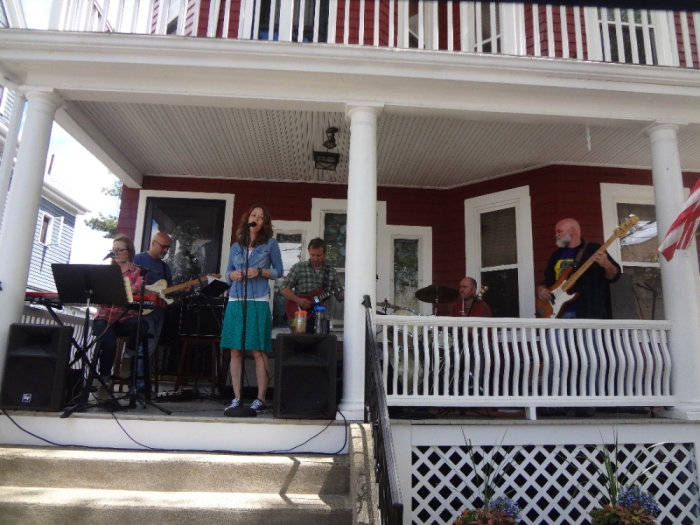 The Arlington Center for the Arts‘ second annual porchfest event, featuring bands performing on porches around town, was divided into two segments, from 12:00 to 2:00 in Arlington Heights, then 2:00 to 6:00 in East Arlington. I made it to the East Arlington portion of the program.

I had two performances in mind for this event, and neither artist disappointed. In between and briefly afterward, I walked the streets of Arlington and caught some other good music, as well. 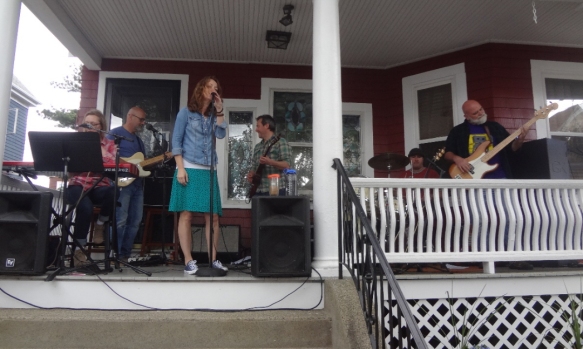 My first porch of the day was inhabited by The Stacking Stones Band. The first targeted band of the day, I had been trying to get out to see these guys for at least a year, so I jumped at this opportunity. I stayed for eight songs and heard a blend of blues, rock, and just a hint of folk-country in the band’s musical mix. They kicked off with “So Familiar,” which displayed a little distorted, somewhat psychedelic blues-rock guitar and a hint of Joplin in the otherwise bluesy vocal, with a slow blues-based rock rhythm.

Also worth noting was “You & Me,” a hooky, medium-fast tempo blues-rocker that carried a hint of a “Sweet Home Alabama” vibe, “Roses All Around You,” which could’ve been the musical sibling of CCR’s “Fortunate Son,” and the band’s rendition of “Tulsa Time,” with showcases some terrific vocal harmonies and a really countrified guitar part. The band closed its first hour with a cover of Waylon Jennings’ “Lonesome, On’ry and Mean,” showcasing its harmonies, a crunchy guitar line, and powerful vocals. A tight unit with some well-written originals whose performance carried a fun vibe, I look forward to my next encounter with The Stacking Stones Band. 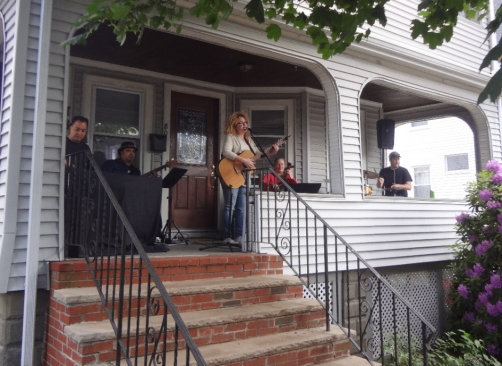 Later in the day, I made my way over to see my other targeted performer of the day, Samantha Farrell. When I arrived at Samantha’s porch, I caught the last song-plus of Greg Klyma‘s performance. I didn’t take any notes as I was getting settled in, but I was impressed my Greg’s strong voice and performance style and plan to review his summer album release, so watch for that in the blog in the coming months.

When Samantha Farrell finally began to sing, just wow. She has a voice and a performance style that enthralling and amazing at the same time. At times during the performance, she’d hit an amazing note, and I’d glance over at some of the other vocalists in the audience who would be shaking their heads in amazement, knowing they’d only be able to sing like that in their dreams. Her vocals seem rooting in jazz with elements of torchy standards, blues, and vocally-powered pop ballads.

When she was singing “Let It Go,” for example, her power vocal contained that sort of torchy blues-pop edge reminiscent of Elle King. “September Sun,” with kind of a jazzy, folky feel, utilized her strong, powerful, very high vocal. “Tuesday Night” was also very jazz-based – sophisticated, cocktail lounge fare that featured a crisp, strong vocal from Samantha that would cut through pea-soup fog. And at the end of her set, the slow, rich sound of “Fade Away” featured extremely well-placed cracking of her vocal. Simply, holy cow, Samantha Farrell is a powerhouse singer with few equals.

In between (and on the walk back to my car afterwards), I caught a few other bands worth mentioning. 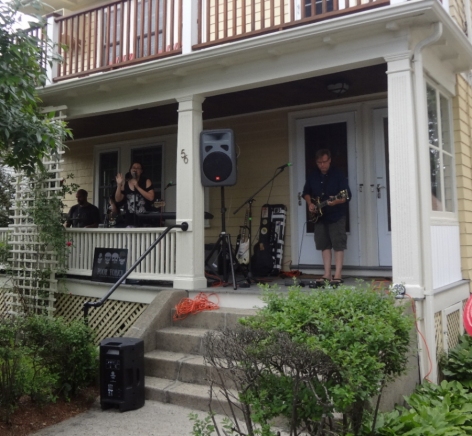 Poor Yorick was just a few houses down from The Stacking Stones Band, and because both bands were fairly high-volume, the two bands made a deal to pass the performance back and forth every four songs and shared each other’s audiences. Riding powerful vocals and psychedelic rock guitars, the band blasted through its set, for the most part. They kicked things off with a cover of “Come Together” that was all parts psychedelic hard rock, sporting strong vocals and shredding axework. “The Love Cats” was a funky and somewhat theatrical number. And also worth noting was a song that was a mild departure, a straight-up rock version of “Don’t You (Forget About Me)” that was obviously heavier than the Simple Minds original but performed by the band as the least-heavy rocker of its first set. 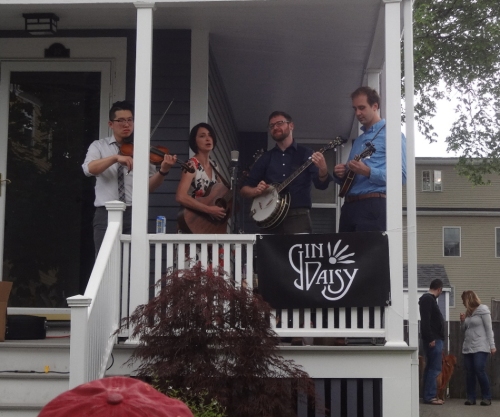 On my way up Cleveland Street, I stayed for a few very cool songs from local bluegrass band Gin Daisy. As I approached their porch, the band was deploying great blended harmonies and some serious pickin’ from the entire group – well, technically the fiddler was bowing, but still. I stayed through an old-school bluegrass number, a square-danceable song that would’ve been good barn-raising music, and an interesting arrangement of “Midnight Special” that varied tempoes throughout. I don’t know this genre well, but I do recognize talent, and Gin Daisy has that in spades. 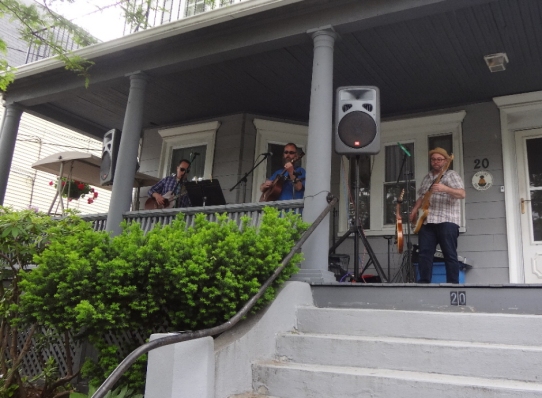 I caught a few songs from 25 Pearl. My first impression was ’70s classic rock meets ’70s folk in a blues club. The songs carry a kind of dark flavor and perhaps a harshness and aggressiveness unusual for bands that blend the rock-folk-blues elements employed by 25 Pearl. Dylan meets classic rock at a Tom Petty concert, performed with a uniquely erratic nature. 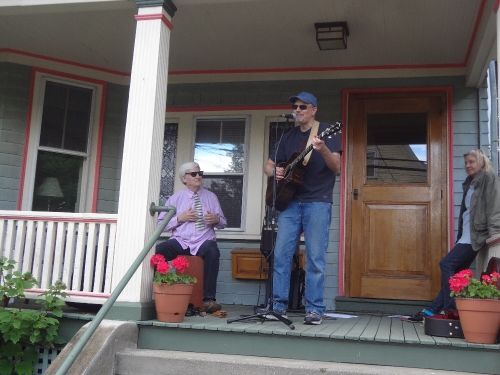 Finally, on my way to my car from Samantha Farrell’s porch, after a late-afternoon passing rain shower chased a lot of people away and convinced many bands to shut down a half-hour before the fest’s end, I did run across a few performers continuing their performances. One that caught me ear enough to get me to stop and listen was Casey LJ. I was able to enjoy his final four songs, all performed with a unique charisma and a vocal tone that I can’t quite describe as a drawl. He kept his crowd happy with extremely entertaining renditions two Eagles tunes (“Desperado” and “Heartache Tonight”), The Who’s “Squeeze Box,” and the Grateful Dead’s “Deal.” It was a great way to end a fun afternoon.

Indeed, my first porchfest of any kind, Arlington’s was a lot of fun. Unlike some of the more inner suburbs, on-street parking (especially for those of us who arrived before the performances started) was easy, plentiful, and legal, in part because we weren’t competing with residents, as the homes had driveways. But there were plenty of participating porches within easy walking distance of each other – even easier for the attendees who brought their bikes. Conceptually, it’s a neat event and a great way to hear a variety of music on a pleasant afternoon.