My review of Simon Scardanelli’s previous full-length album, Dark Dog Days from his band Dr Scardo, was entry #3 in the “Road Back to Music Journalism” series with which I launched Geoff Wilbur’s Music Blog last fall. In that article, I also touched on Simon’s background in 1980s pop band Big Bam Boo and the fact that I first reviewed one of Simon’s albums when I wrote about his band The Eye Camera’s album entitled Death Row Tales in the mid 1990s. Simon’s new album, Make Us Happy, hit the streets today, March 4, 2016. 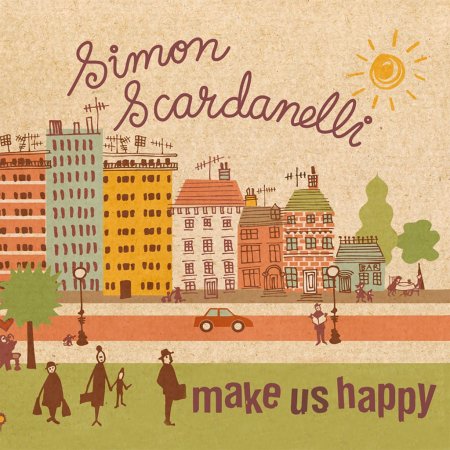 In some ways, this sounds almost like a follow-up to Dark Dog Days, if perhaps a bit less dark for the most part. It’s more energetic, and the music itself seems a bit more cheerful on a greater percentage of the tracks, though the lyrics belie the deeper-seated frustration behind the music. I’ve come to expect dark, social issue-driven pop music from Simon, but Make Us Happy has a bit of a roots-rock/country-folk edge to it. Make no mistake, though; Simon’s recognizable voice and inimitable vocal delivery style, as well as the cynically-energetic, carefully-crafted lyrics he delivers, still drive this album. But it has a bit of a unique edge to it. Perhaps the best words I’ve found to describe this collection are that it’s rootsy, issue-driven pop that’s passed through the dark side of a carnival fun-house mirror.

From the first strains of “Whirlwind,” this album begins as you’d expect an Americana disc to open. As the record progresses, the music leans a bit old-school folk-country, suggesting perhaps even a little Johnny Cash toward the beginning of the fourth track, “Hopes in My Pocket.” OK, maybe just a hint.

The title track, “Make Us Happy,” is really an uptempo dark pop track, but the tempo and delivery hint at the rant of a carnival barker sounding the alarm while calling out an energetic, twisted country square dance. This song is a masterpiece!

It’s followed by “Sweet Loretta,” which sounds a bit more like pure Americana music; I’d’ve suggested the mountains of West Virginia, but the song itself mentions Kentucky. And it’s followed by a song that’s oddly accessible, “Truth Seems Stranger,” a song that’s tough to describe more precisely than as folk-pop that’s not as pop as it seems to be.

“Days That Lie” returns to an Old West, country/folk/Americana vibe before the album closes with the ominously haunting “Dagger.”

As a whole, Make Us Happy is a nice, deep, thoughtful collection of songs that lean a bit darker than would ordinarily accompany their pop packaging. If you don’t own any of Simon Scardanelli’s albums, check this one out; it’s not like anything else in your collection. And if you’re already a fan…? Well, though I’m sure you’re planning to buy the disc anyway, I can assure you it’s equal to his best.

Check Simon’s website for performance information. On March 13th, you can catch him on Genevieve Tudor’s Sunday Folk @ BBC Radio Shropshire. And on June 9th, he’s scheduled to perform at The Acoustic Club @ Half Moon in Bishop’s Stortford.