For those of you who read my review of TOS’s CD release show, you know the backstory. I stumbled across this incredibly talented young band solely because I was looking for some live music here in the outer Boston suburbs one weekend. I’ve been listening to the Killer CD ever since, including most days during my commute. (I have also more recently reviewed another of the band’s concerts, and I may continue reviewing their shows regularly if they keep scheduling gigs a whole lot closer to my house than any of my other favorite local bands.)

TOS is a rock band with timeless songwriting, talented musicianship, and a unique, identifiable, modern sound.

The band is led by singer/songwriter Sophia Ward, whose sensitive-but-powerful, often haunting vocals provide an appealing delivery of her well-crafted lyrics; both the delivery and songwriting lend artistic credibility to TOS, a band that can be easily considered both rockers and artists.

Her comrades are talented enough to be up for the task. Many of the songs seem to be driven by the rhythm guitar, generally acoustic, delivered ably in varied stylistic formats by Jonathan Sommer. This frees up lead guitarist Jackson Parker to add texture to the songs with his electric axework, his solos proving difference-makers on a few tracks. Then there’s the rhythm section. For the most part I’d label bassist Jae Mannion and drummer Mitch Rolla as steady and dependable. Occasionally one or the other will add a hook or featured run to a song while the other holds down the rhythm fort; the two work together well as a team. 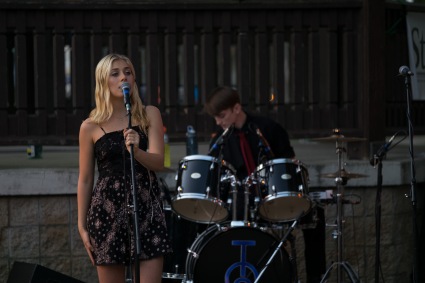 The album-opener “Death of Me” is the standout on the disc, though it’s one of a half-dozen I’d consider exceptional. But this song is appealing on multiple fronts. It introduces the listener to both Sophia’s quintessential somewhat haunting vocal and her occasionally called-upon insistent wail, the strumming rhythm guitar that propels most of the song, the subtlety of the rhythm section (there’s an occasionally recurring bass hook that unassumingly raises the song’s memorability level), and a lead guitar line adds texture in fortuitous spots. As a result, it’s a potential fan favorite with staying power.

Throughout Killer, it’s the variety on the disc that helps it stand up over multiple listens. That begins with the songwriting. There are a couple of my favorite lines that exhibit the lyrical cleverness I look for.

First, during the band’s anti-love song, “Need This Love” – one of my favorites – in a tone that reaches sadly into the soul, supported by a blues-infused rhythm, you’ll hear “I need this love/To go away/’Cause all it’s brought/Is tears and hate.” Great blues lyrics from this alt-rock outfit.

Also, in “Mouthful.” Musically, this song crept up on me but is now on heavy rotation on my stereo. Sophia’s voice dances around the melody deftly in fits and spurts in this one. It’s moody, at times either sultry or sadly angry, and delivers another of my favorite lines on this disc, “Your biggest mistake starts with my name.”

Oh, but the songs get deeper. “Ghost,” anyone? Another haunting song with powerful musical builds and tempo variance. It’s a catchy song you’ll find yourself singing along with, one of the standout tracks on the disc… about being abducted in the woods and held captive. It’s jolting every time you realize what you’re singing along to, but it’s oh-so-well-written.

Lest you think the album’s serious and/or angry, don’t. Even the aforementioned songs are fun listens in all their seriousness. Also, at the absolute opposite end of the spectrum, beginning with an electric guitar riff that’d make a ’70s metal band proud before flowing into a rather pop-rocking, energetic song, is “Reckless.” A partying song that features an excellent, well-placed electric guitar solo.

And while “Soul Keeper” is yet another relationship song that’s not exactly cheerful, it’s not all romantic doom and gloom in TOS’s repertoire. “Waterfall” is reminiscent and wistful, while “The One” is rather romantic and hopeful, even if its opening reveals that it’s a bit neurotically so.

The disc closes, though, with its title track, “Killer.” Another anti-romantic song. The guitar line is like something Metallica would come up with if it were to write a heavy alt-rock song. And “Killer” does, indeed, close the album emphatically with power-howled vocals, aggressive stop-start drumming, mile-a-minute acoustic guitar picking… every tool in TOS’s kit but the kitchen sink. The ideal album-ender to leave the listener content and out of breath.

So yeah, I’ve been enjoying having this CD in my car the last several weeks. It’s a rockin’ disc from a tight, talented group, containing enough depth and musical variety to remain interesting across dozens of listens.

Get out to hear TOS if you can. This is absolutely one of the best live bands in Boston. TOS’s next performance is Saturday, September 10th at the Remember September Music Festival in Brockton, MA. The band also has an upcoming Saturday, September 24th gig (11:00 AM-1:00 PM for you morning people) at the 22nd Annual Weston Car Show in Weston, MA, a Saturday, October 1 early afternoon (2:00 PM) set at MaynardFest in Maynard, MA, and a Friday, October 10th gig at Out of the Blue Too Art Gallery in Cambridge, MA with Company One and Pillbook. Check the band’s website for more information on those gigs and others as they’re added. You can also sign up for their mailing list like I did.