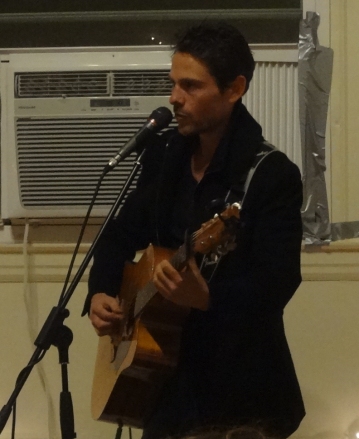 For weeks, I had planned to head to Boston for the Springtime Spectacular at the Lawn on D on May 13th to see Analog Heart, whose last album I reviewed last spring but who I haven’t seen perform live since before I launched the Blog. Mother Nature, however, had different plans, as rain was forecast to begin around the time of the band’s set, and even if it wasn’t heavy during the set, I was virtually guaranteed to be driving home in a torrential downpour, with an inch or more of rainfall in the forecast. So I turned to “plan B.” Lori Diamond and Fred Abatelli were performing in Arlington, MA. I plan to try to get out to see them perform sometime this year; I really enjoyed the show I reviewed last year. I figured I plan to get out to at least one of their sets this year, anyway, so this would be as good a time as any. But I’d still have to drive home in a heavy rainstorm, so I checked more local listings, looking for shows closer to home and listening to clips of the artists to help me decide if I should abandon “plan B,” as well.

The choice was quickly made when I came across the listing for Mark Wilkinson’s gig out here in the far western suburbs of Boston, much closer to home. And upon finding one of his YouTube clips, within the song’s first few seconds, I knew this dude with the special voice was someone I wanted to see perform, and since he’s on tour (and based in Australia), there would not soon be other opportunities to see him. To cap it off, my wife had the same initial reaction to Mark’s songs, so we caught his house concert together (a nice change from my usual solo live-gig adventures). 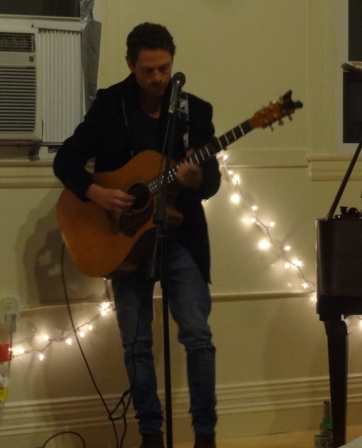 Located in an apartment in Hudson, tonight’s venue was ideal, its great room serving as a large, open concert space with high ceilings and terrific acoustics, sufficiently large yet intimate for a house concert. And well-suited to Mark’s incredible voice, soaring and full of emotion.

Mark’s voice has been compared to James Blunt’s (“You’re Beautiful”). I also hear some Alex Band (The Calling) in there. And his tempo and style have also earned him comparisons to Tracy Chapman. I’d add Lisa Loeb and Sixpence None the Richer to that list. I’d probably even throw some Jim Croce and Gordon Lightfoot into the mix, too, for their warm, emotional vocal styles capable of connecting emotionally with listeners. I suppose what I’m trying to say is that Mark Wilkinson’s voice and performance style is timeless, powerful and emotional, and seems capable of touching that nerve that reaches directly to your heart and soul, connecting personally and profoundly with his audience; on this evening, an intimate collection of about 25 people. What I had sensed from Mark’s recordings came through in spades at his live show: This guy is special. 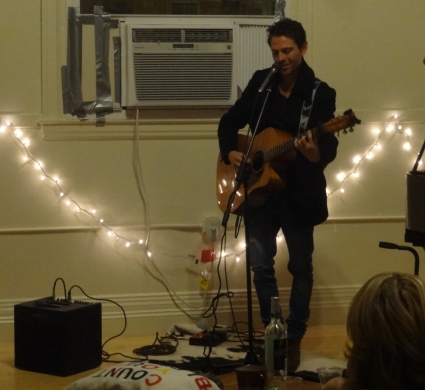 The set consisted of 13 songs, and he was encouraged to follow it with a 3-song encore. He opened the set with such a powerful song I forgot to jot down its title, as his voice and strumming boomed warmly and envelopingly through the room, enhanced by its great acoustics. He followed that with “Chasing Rainbows,” a sad, sensitive, but still full-voiced and insistent tune whose tone was simultaneously melancholy and defiant.

Mark went a bit poppier with his next song, “Everything to Me,” with a more hit-friendly tempo and strum and a songwriting rhythm with just a hint of a slightly more celebratory flavor. There’s a nice, catchy mix of musical style and lyrics that, of course, still feature his voice, a voice a listener could get lost in and lose all track of time and place.

Other songs stood out during the evening, as well. Of note, “Middle Ground” showcased sensitivity and strength, as the lyrics meandered through the story. This, Mark noted (for those of us unaware here in the States), ended up in a coffee commercial in Australia, so it’s his most well-known song back home as a result.

“Hey Baby” stood out, as well, as it served as the well-chosen singalong/audience participation song of the evening. It was followed by “Benny’s On the Rooftop,” a song that sports a nice, faster tempo and proves memorable – perhaps a favorite even – though the lyrical content isn’t so happy, to put it lightly.

The one cover in his set was of Bruce Springsteen’s “I’m On Fire.” As with any great cover, of course, Mark makes it own, adding his personal vocal flair to The Boss’ brooding classic. But he didn’t leave the room’s energy down, following it with the playful “Please Don’t Tempt Me,” in which he employs a relatively edgy rock vocal. Great song to mix things up with.

The song “Don’t Say It” displayed such emotion, sensitive with an interesting guitar-picking pattern adding additional character and movement to the song. It was followed by “All I Ever Wanted,” a faster-tempoed song with an uplifting feeling, which served as a great set-ending number.

Oh, but he was greeted by a standing ovation and obliged with a 3-song encore, kicking it off with a suggestion from the audience, an older song of his entitled “Baptism By Fire.” And, true to the lyrics, there was some fire in Mark’s always-rich vocals accompanied by emphatic strumming. He followed that with “When the Armies Arrive,” driven by his echoing, booming voice full of emotion.

And he closed the evening with “Still Got My Baby,” whose interesting, peppy energy and playful tempo, driven by a little funky syncopation, provided a pleasant, cheerful ending to the evening. Excellent selection to send people home with a smile on their faces. 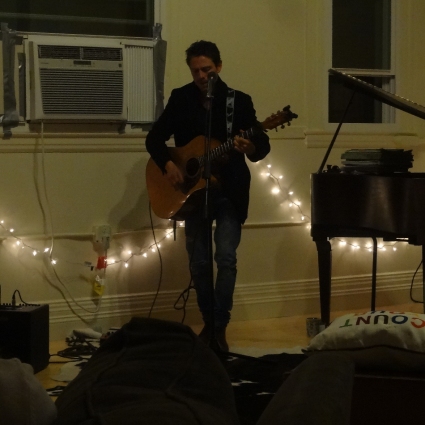 But, of course, as with many house concerts, not everyone goes home, as the evening concluded with additional conversation, many of us enjoying nice chats with the artist and the others in attendance. Nights like this are an occasional fortunate happenstance, stumbling across a great talent who isn’t nearly as well-known in the U.S. as he should be… yet (we hope).

There are still several more stops on Mark’s house concert tour. (And I’d recommend going if you can; this is a special tour during which he’s eschewing traditional venues.) His dates in Sea Girt, NJ, Dublin, OH, and two of his three gigs in Ontario are already sold out, as is one of his UK stops. However, you can still gets seats at his performances in Montclair, NJ (May 18th), Charleston, SC (May 23rd), Potosi, MO (May 27th), Nashville, TN (May 28th), McGregor, MN (June 2nd), Milwaukee, WI (June 3rd), Elmwood Park, IL (June 4th), and Ottawa, ON (June 10th), plus six of his seven shows in the UK from June 28th through July 6th. Check the tour page of Mark’s website for more details and to reserve your tickets.