I first heard Analog Heart late last summer at Worcester’s stART on the Street festival. I rocked through the band’s entire set, grabbed the download card the band was handing out for “Merrimack Jane,” and drifted away. This was during that period of time during which I had committed to launching Geoff Wilbur’s Music Blog but was still keeping it quiet. As time passed, “Merrimack Jane” became a staple of my personal playlist, so when I assembled a list of bands I wanted to contact to offer reviews, Analog Heart was on that initial list.

The band’s backstory began in 2010 when singer Liz Bills placed a craigslist ad and connected with guitarist Jesse Cohen and drummer Austin Ferrante. In 2012, the band recorded its debut, self-titled album. That same year, Liz entered American Idol and made it to the Hollywood portion of the show, placing in the women’s top 30. The trio added backup vocalist/rhythm guitarist Guy Jerry in 2015. And they’re all joined onstage by “Greg,” the prerecorded bass tracks that have solidified a revolving-door bass player situation. 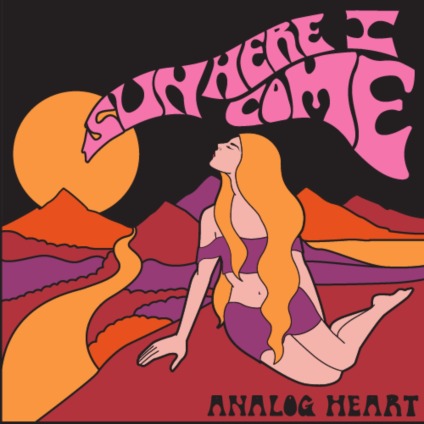 Distorted guitar hooks and power rock vocals. Analog Heart’s songs are much more than that, but those key elements are where everything starts. At its best, the band churns out songs that boom, rattle, rattle, and rock! (Yes, they rattle twice.)

The album cover sports a psychedelic look that meshes well with the first impression Analog Heart made when I caught last summer’s festival set. And, indeed, this disc blends a ’60s/’70s classic psychedelic rock flavor with a modern alt-rock vibe, hard rock power, and some down ‘n dirty swamp-rockin’-boogie guitar licks.

Sun Here I Come kicks off with rock ‘n roll authority. First is “Whoa,” a rollicking number that thumps, rattles, and rolls its way right from the get-go. It’s followed by “Merrimack Jane,” which adds a bit of Southern rock outlaw flavor to the mix.

By this point, the speakers won’t stop shaking, and it’s obvious guitarist Cohen and Bills may have discovered a modern, somewhat crisper, 2010s spin on Skynyrd-meets-Joplin with a hint of Hendrix-meets Ann Wilson thrown in for good measure. With Ferrante’s pounding drums and Jerry’s steady rhythm guitar rounding out the group (with, of course, “Greg”), Analog Heart is a barely-contained explosion whose music would fit well in a black-lit basement rock club or a weekend-long festival.

Analog Heart slows it down a bit, as well… to what most bands would call mid-tempo. In fact, there are a few mid-tempo songs on the disc that really stand out for me. Aside from the first two tracks, the other three I carry with me on my phone are: “Let It Go,” a song with a slow-build buoyed by a slick opening rhythm, Bills’ insistent vocals, and Cohen’s well-placed distorted guitar licks; “Try to Get Along,” which grabs the listener with catchy, distorted guitar and crisp, clear, emotional vocals; and “Sun Here I Come,” which again pairs powerful vocals with a monster guitar hook. The trend? Yes, guitar shredding with powerful vocals. That’s rock and roll.

Now, if you insist on a sensitive touch, there is a ballad on the album, “Like a Dream,” that showcases the powerful-yet-sensitive side of Bills’ pipes, though even while enjoying a beginning-to-end ballad, you can still feel the barely-restrained energy that’s what puts the “power” in a power ballad. But when “Like a Dream” is over, put your lighters away because Analog Heart is unabashedly a rock band. And songs like full-octane rock-fest “Flickering By” and “She’s Rock and Roll,” which mixes psychedelic and power rock, will remind you if you forget.

At risk of stating the obvious, the power of Bills’ vocals and Cohen’s guitar licks, combined with the band’s ability to write songs that showcase those exceptional skills, ensure Analog Heart has an opportunity to be a festival, club, and arena favorite; the band’s albums (if Sun Here I Come is any indication) should appeal to modern heavy alt-rockers and psychedelic rockers alike. I’m looking forward to hearing a lot more from this talented ensemble in the future.

Analog Heart lists four upcoming shows on its website: Saturday, June 11th at ONCE Lounge in Somerville, MA; Friday, June 17th at Luthier’s Co-Op in Easthampton, MA; Saturday, July 25th at the Byfield Music and Arts Festival in Byfield, MA; and Sunday, July 10th at Great Scott in Allston, MA. This is a great live band; get out to a gig if you can!