Speakeasies. Prohibition-era jazz clubs. Juke joints. That’s at least the music at the root of The Gentlemen’s Anti-Temperance League‘s sound. It’s jazzy swing music, the stuff you’d dance to in a club full of mobsters in black-and-white movie-era Chicago.

It’s really more complicated than that, though. Even within the album, the styles vary. Much of the disc is smooth and flowing, but the songs toward the end are increasingly harsh and edgy. Of course, if you read this Blog much, you’ll know I love artists whose music explores a breadth of musical territory while staying true to their own, identifiable styles. And The GATL does that, quite impressively. 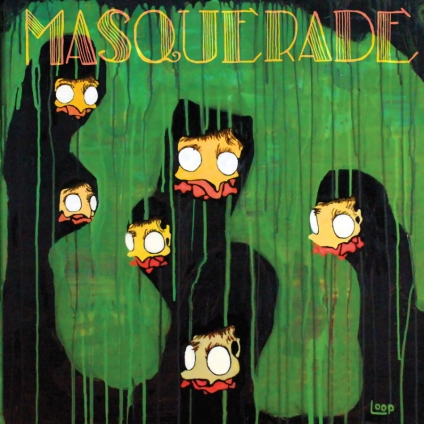 Kellie Reichert’s voice is noticeably versatile, ranging from sugary sweet to smooth to harshly cold. Musically, songs are led by different instruments, with violin and horns playing key roles in at least a couple of my favorites. Each song has a vibe all its own, though, so here are my thoughts on each of Masquerade‘s eight tracks.

The collection kicks off with “Prologomenon,” a smoky jazz club number that’s simultaneously smooth and anguished, musically led forward by the acoustic guitar with the other instruments’ minor solos adding texture. Indeed, I’ve just described your standard gypsy jazz song, so I should probably focus instead on the smooth exchanges and seamless interplay among the musicians, in and around the vocals. So let’s just pretend that was the focus of this paragraph.

Next up is “Pete’s Bossa,” my initial favorite song on the disc. Indeed, it remains one of my favorites; notably, though, it was the first to jump off the disc at me. This song is memorable for its prominent use of horns, though upon closer listen both the acoustic guitar and violin play prominent roles.

“Oh! (What a Senseless Affair)” features musical stops that place focus on key vocal phrases; very cool. The result is a song that would be exceptional music to play while enjoying a romantic dinner at a dimly-lit supper club, except that everyone in the club would likely stop, turn, and look at the stage during those dramatically focused vocal moments. I suppose that’s not a real-life scenario, but it’s certainly what would happen in the music video I’d direct for this song. Lyrically, this has one of the several memorable lines on the album – and y’all know how I’m a sucker for interesting lyrics – “Be kind to yourself and everyone else/Or live on your own in a personal hell.”

The lyrical cleverness continues in the next song, the title track, “Masquerade.” The song that eventually grew into my personal favorite on this disc starts early with phrases like “even the sycophants are sick of me” and progresses to deft interweaving of alternate definitions of “sweet.” But, of course, lyrics alone aren’t enough to make a song really stand out. Instrumental builds to power, emotional vocal wails, and a song structure that lets musical jamming run somewhat freely but contains it within a song structure that allows the music to follow the lyrical journey – that’s the combination of features taht allows “Masquerade” to eventually rise to the top.

“Those Meddling Kids” begins the slightly harsher second half of the album. A little “Peter Gunn Theme” flavor, stemming from a combination of horns and plucked strings, provides the drama, while next-man-up style instrumental solos provide some welcome swing. And I suppose the song title suggests a little Scooby Doo in there, too. Or, at least, that was my first impression.

“Gone Tomorrow” brings to mind a movie scene of a love story about to go horribly wrong. If a montage scene were necessary, this would be its portion of the soundtrack. It would probably be Prohibition-era. One of the young lovers would be an upstanding citizen; the other would long for that world but be inescapably tied to organized crime. Or perhaps it would simply be the story of a single night, with the closing lyrics of “stay here tonight/but then swear you’ll go” lingering in the air as the camera faded to black. 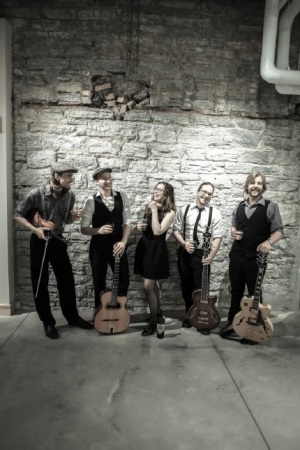 The disc closes with two songs showcasing the darkest of the band’s dark side. First up, “In Vino Veritas” maintains a dangerous tension throughout. Again thinking of song placement in film, this would play where everything fell apart, perhaps where everything was beginning to slip away from our downtrodden hero, as his attempt to game the system began to fall apart and an untimely, tragic end was about to befall him at the hands of the gangsters he was trying to swindle. Or maybe, if you lack imagination and stick strictly to the lyrics, it’s just a song about being troubled and drinking too hard.

Masquerade‘s final track, “Sam Dawes,” is likely to be a popular favorite. It’s a New Orleans jazz-themed song along the lines of “Devil Went Down to Georgia” but with a unique, Bedazzled-ish twist. This energetic, fast-paced number is a great way to end The GATL’s 8-song collection, and it’s likely a fitting ending to one of the band’s concerts, as even listening to this song (let alone attempting to dance to it) leaves the listener contentedly exhausted.

In the end, this is an original, enjoyable collection of songs from a tight, talented, Minneapolis-based gypsy jazz and swing outfit, and it’s a welcome addition to my music collection.

A quick perusal of the “shows” page of The Gentlemen’s Anti-Temperance League’s website reveals a busy schedule in Minnesota and Wisconsin. A glance at the band’s Facebook page can also offer clues to upcoming gigs.