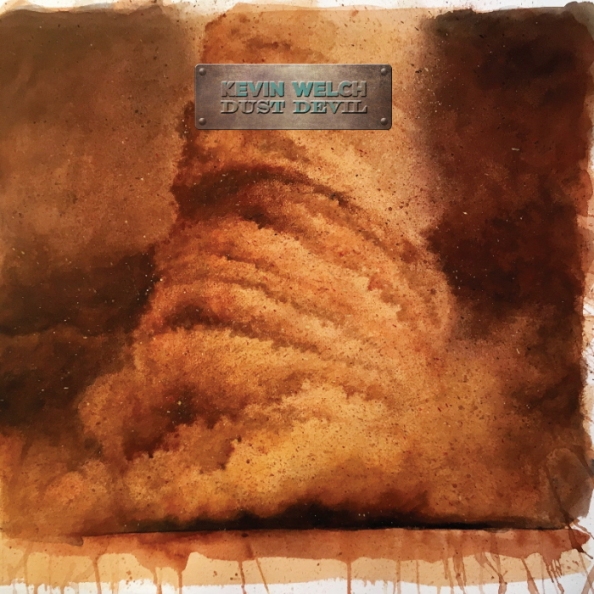 Kevin Welch is a renowned songwriter in the Americana lane of the country music highway. He got his start as a sought-after songwriter in Nashville, and by the time he released his first album, a self-titled disc in 1990, I was just beginning my reviewing career. I remember – and still have – the album, but I wasn’t able to find my old review. Back in the days of print publications, even though I was master of the short, under-100-word review early in my writing career, probably half of my reviews ended up on the editing room floor due to space constraints, so there’s a good chance it never saw the light of day. This review, however, will be published, as you can see, because it’s my website and I don’t have space constraints.

Kevin’s vocals are soft-spoken, with a Bob Dylan-esque storyteller’s rasp, a bit of a Randy Newman-ish larger-than-lifeness at times, all while still being restrained and subtle, and delivered with a folk-country cadence. Dust Devil is a storytelling songwriter’s album, a down-to-earth telling of everyday tales, an everyman’s exhibition of extraordinary songwriting.

“Blue Lonesome” starts as a slow-moving number that grows in intensity, includes well-placed sax, and emerges as a memorable soft-to-mid-tempo romper, all punctuated by Kevin’s vocals at their most gravelly. It’s followed by the pensive, blue country guitar-picker – replete with weepy slide guitar and closing harmonies – “Just Because It Was a Dream,” a song on which you can really feel the desert wind blowing. Following that, Kevin is at his folky, picture-painting, storytelling best with “The Girl in the Seashell,” which sounds as if it should be familiar as it sways gently, even if it isn’t.

“High Heeled Shoes” is a favorite, stylistically very cool, with a sort of 1920s speakeasy vibe reminiscent of something I’d expect to have heard on The Gentlemen’s Anti-Temperance League’s Masquerade album I reviewed back in 2017. Piano, horns, slightly gravelly vocals, and a smoke-filled barroom. And… scene!

The album continues, relying on Kevin’s memorable voice, his expert-level songwriting, and some great musicians to deliver more tight, memorable numbers. “Brother John” is one track that’s a particular earworm, with horns punctuating the “Brother John, Brother John” lyric throughout. And to be honest, that’s the part that comes back to me days later, though the whole song is a fun listen, a recollection, a reminiscence.

Moving toward the end of the collection, the penultimate track is “A Flower,” which Kevin performs with the most spoken-song style vocals on the album. True country storytelling about hard times, tough lives, and defiance.

And the final track, “Dust Devil,” is a very gravelly-voiced, slow-picked number with the feeling of wide-open spaces and the old west. Or perhaps a cattle drive. Lyrically, of course, it’s more personal than that (“I’m an old dust devil, waiting on the wind to die down”), though isn’t the usually the case?

To be honest, this album is so subtle, it didn’t convince me on the first listen that I’d choose to review it, but it’s Kevin Welch, and it’s pleasant enough, so I gave it a few more spins, and Dust Devil revealed its brilliance over time. The attention to detail is impeccable, the songwriting is exceptional (well, it is Kevin Welch), and it’s the album’s nuances that worm their way into your brain until Dust Devil becomes a favorite spin. For some of you, sure, you’ll find an instant connection. But even you don’t, give it time. It’s a truly fine piece of work.

There are no live shows currently scheduled, but when there are, you can find them on Kevin’s website.