photo by Steve Benoit; photo courtesy of Off the Stage Music

Imagine energetic Americana music with an overflowing stage full of musicians, replete with horn section, and the party atmosphere of every college town’s favorite ska band. That’s Boston’s Los Goutos, and with Mighty, they’ve delivered a colorful box of audio fun in a carryout container. A seven-piece band with multiple multi-instrumentalists and several songwriters, I suspect this group could perform just about any style it wants to, but Los Goutos’ primary goal seems to be the creation of an inimitable, raucous good time. 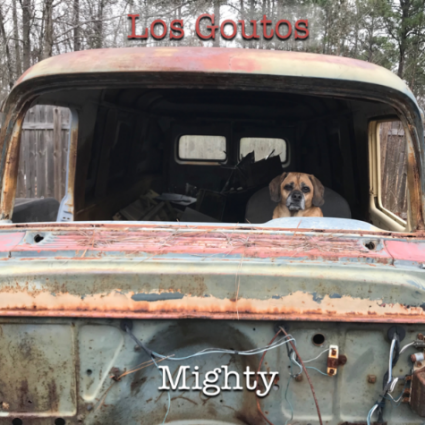 image courtesy of Off the Stage Music

The album kicks off with what will initially strike you as a romp, “Steal It, Pawn It, Buy Another.” And indeed it is, but you’ll quickly discover this is not the band’s top gear. Los Goutos ups its game with the very next song, “Tequila Set the House on Fire.” Yes, you’ll soon be singing along, and before you know it, without trying, you’ll be tracing the path of the fire along with the band, singing loudly along with this mariachi-flavored aural adult beverage.

I won’t touch on every song, but on this disc you’ll be treated to energetic tunes – a lot of them! – featuring horns, accordion, ukulele, and if it were up the band, I’m sure, essentially every instrument ever played, possibly more. Lyrically, be prepared for a fair share of silliness. Or, at least, cleverness. I believe when I reviewed their album release show I called it a party in a box. And, indeed, as noted in the opening paragraph of this review, the album is the carryout version.

Raucous songs like “Down to the Studs” and “Moscow Mule” are sure to get you dancing. And you’ll catch yourself singing every “yea-uh” during hillbilly-styled knee-bobbing rocker “Can’t Hurt.”

photo by Jim Bouchard; photo courtesy of Off the Stage Music

Yet another favorite, with its mix of Los Goutos’ humor, picture-painting songwriting, and tag-team instrumental leadership, is “If You’re Gonna Miss Me (You Must Be Really Lonely).”

“Dawn” is a squeezebox and horn driven number with a distinctly ’50s rock feel.

Of course, you’ll find some Louisiana Cajun swamp circus swing on the disc, too. At least, that’s my working description for “Over Easy.” To my knowledge, it’s the sole entrant in this genre, but you’ll understand when you hear it.

“Killing Me Kindly” is a personal favorite, as it ambles melodically with perhaps a more uptempo flair than you’d ordinarily expect from a song thus entitled.

photo courtesy of Off the Stage Music

Finally, there’s the ’50s/’60s gimmick dance number, something to follow “The Twist” on American Bandstand. Or maybe not. But there’s certainly an audience participation, singalong aspect to “The Corkscrew,” the perfect party song for an at-least-7-piece band in a college town like Boston.

You know, when I saw Los Goutos live, I didn’t think it would be possible to capture the band’s essence in a studio and package that party atmosphere in CD form. I was wrong. The music is genre transcendent, and the production ideally captures Los Goutos’ essence. Party in a box… to go!

There has been a single released post-Mighty. It’s another great tune, “Help the Neighborhood.” You can get the music at Los Goutos’ website, and you can see the music video on YouTube.

And if you’re really searching, the band also released a couple “holiday singles,” which are available at Bandcamp.

Once live shows are booked again, you’ll be able to find them here, on Los Goutos’ “Shows” page.