One of the cool things about hearing a talented hard rock singer like Corey McLane doing an acoustic cover night is that you get to hear songs from a variety of musical styles delivered by a power voice. Corey is the lead singer of Exhale – I would suggest checking out some of his band’s music here on their bandcamp page – and you can hear the vocal power in the songs he performs, even when the songs themselves don’t feature it. 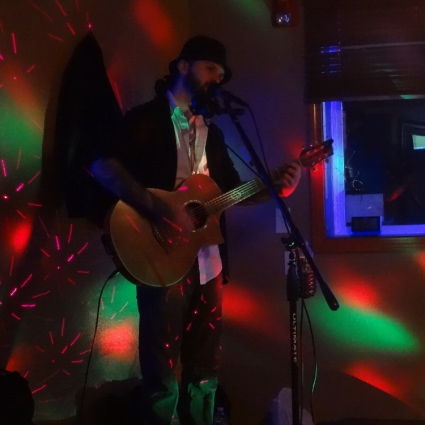 The Hudson House is a cool place to catch music, too. It has a kind of neighborhood bar feel on the bar side (with a nice restaurant on the restaurant side of the house). On this particular night, a lot of folks turned out specifically to see Corey, so it was fun crowd. I like to grab something off the menu to combine live music with a late dinner when I come here, and after a big lunch yesterday, I found something delicious (the kielbasa) from the appetizer menu to try.

I had about an hour and a half block of time available last night, and that carried me through more than 20 songs from Corey, plus a few at the end on which Nikki McLane joined him. There were only a couple songs on Corey’s set list I couldn’t identify, so I know it was either entirely or virtually entirely a set of covers. And, though I hadn’t heard him sing live before, his vocals were as crisp and powerful as I had expected from listening to his band’s recordings, with even the mellowest of covers being drenched in his identifiable, grungy-metal tone, sporting something akin to gravel in his voice, but it really comes across more as a warble or a wobble, though those aren’t exactly right either. The key point, though, is that this dude has a powerful, crisp, identifiable voice, and that’s what you’re looking for in a voice that can fill an arena or develop a large, loyal following.

Corey opened the evening with “Ain’t No Sunshine,” then followed it with a heavy, brooding number (one of the two for which I didn’t catch the title), doing a song-to-song contrast thing he seems to like to do.

There were plenty of instances in which Corey’s take on various hits was interesting and entertaining. His performance of Soul Asylum’s “Runaway Train,” for example, got the grizzle in the vocal but with kind of an ominous echo overlay. He nailed the howls on “The Joker.” And his performance of The Flys’ “Got You (Where I Want You)” was delivered with an almost Southern hard rock wail while being driven by a sound much bigger than he should have been able to get from an acoustic guitar.

It was fun to hear Corey deliver a song like Marcy Playground’s “Sex and Candy” that’s right in his wheelhouse and then, a couple songs later, to follow it with an on-point performance of Pure Prairie League’s “Amie.” He also back-to-backed a very properly brooding rendition of Bush’s “Glycerine” with Third Eye Blind’s energetic “Semi-Charmed Life,” a song whose opening chords elicit a smile that seems so amusingly out of place coming moments after the closing chords of “Glycerine.”

Other standouts during the set included Tracy Chapman’s “Give Me One Reason,” Imagine Dragons’ “Radioactive,” and The Who’s “Behind Blue Eyes.” But I actually stopped taking notes after song number 22, Corey’s spot-on version of 4 Non Blondes’ “What’s Up.” He sounded shudderingly too close to exactly like 4NBs’ Linda Perry, including nailing all the quirky stuff.

Shortly thereafter, Corey was joined by Nikki, and the two performed a few songs before my exit, notably OneRepublic’s “Counting Stars.” Actually, most notably another tune, but I didn’t jot down its title, so we’ll stick with saying “Counting Stars” was the most notable,

In any case, it was a heck of a fun evening of music delivered by an exceptionally talented vocalist. I’d suggest getting out to give him a listen if he’s doing the solo thing at a bar near you; a pure, top-shelf, big stage-caliber voice doing a variety of your favorite tunes. And, of course, if you’re into the heavier stuff, give his band Exhale a listen.

You can follow Corey’s solo acoustic performances via the “Events” tab of his Facebook page. And you can follow his band’s Exhale gig schedule via the “Shows” page of their website or on the band’s Facebook “Events” page. In fact, you can catch Exhale tonight at Carlo Rose in Pelham, NH or next Saturday, November 4th, at a Toys for Tots benefit show at Sammy’s Patio in Revere, MA. And I see more gigs in New Hampshire, Massachusetts, and Rhode Island before year-end, so check out the band’s calendar (as well as Corey’s solo show list) and catch some loud rock & roll (or a bunch of well-known covers performed by a dude with a powerful rock ‘n roll voice).