I first reviewed Paige Davis last spring, in this review of Off the Stage Music’s Behind the Songs event at the Hard Rock Cafe in Boston.

Paige’s new single “Carousel” was released on February 14th in advance of a planned spring 2018 EP release. A pop-country number that sports a G-rated movie, all-American, apple-pie freshness, the song moves through verse, chorus, and bridge progressively, with a well-written complexity that ties tempo and progression to the song’s lyrical ins and out. 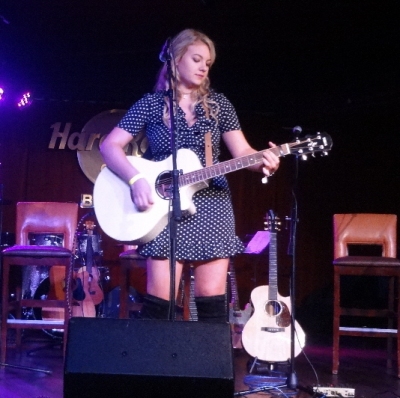 Interestingly, I get a couple pop-rock connections from the very beginning of “Carousel,” with the opening beat reminiscent of Avril Lavigne’s “Happy Ending” leading into a guitar progression and rhythm that uncannily recalls the early strains of Semi Sonic’s “Closing Time.” As the song settles in, its entirety sounds sonically more like the sort of pop-friendy country I might find on Lauren Lizabeth’s To Be Young (recalling an album I previously reviewed), the sort of music you might have expected to share the stage with Taylor Swift as a teenager, though with a vocal texture very specific to only Paige herself.

I’ll let you listen to the lyrics yourselves. And you should listen. Containing clever turns of phrases, using “Carousel” as a life metaphor, they’re appropriate to a high school fan base but worthy of a budding young artist. “Carousel” is a fine introduction for potential new fans – and a long-awaited reward for her Paige’s existing followers – in advance of her debut long-form (EP) release.

Yes, the EP. Also, though it doesn’t list any dates now, keep an eye on the “Shows” page of Paige’s website for upcoming live performances as they’re added.