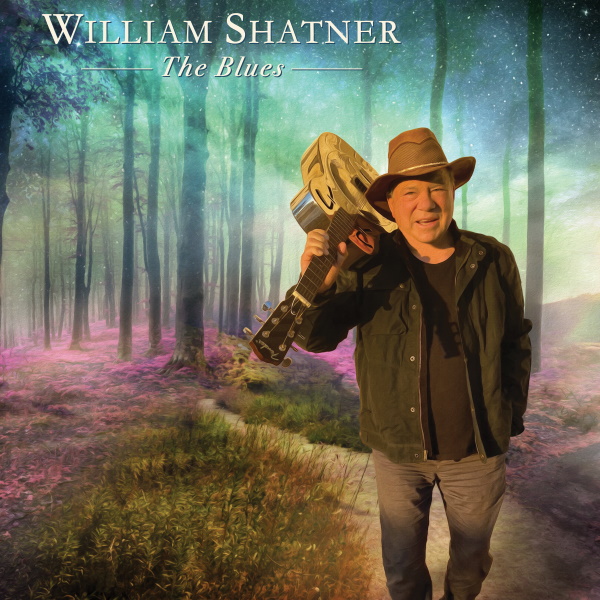 One of a kind. This album. And William Shatner. The Blues grew on me slowly, and I guarantee it’s not for everyone – in fact, you probably really have to love Shatner and “get” his persona to dig this disc – but man, it’s got style. And it leaves me with a singular conclusion: William Shatner is a herky-jerky rock and blues beat poet.

First, make sure you’re in the right mood for this album. It’s never smooth – Shatner’s delivery guarantees that, as his vocals, more spoken than sung, are largely near but outside the pocket, farther off the beat than you’re accustomed and not consistently so, providing dissonance, but they also deliver a very original, hipper-than-perhaps-initially-apparent vibe. Never quite what you expect, the album is a work of art, and it has a style all its own, even if it takes a few listens to really understand its groove.

There’s also some amazing musicianship on this record, and you’ll recognize many of the famous tunes Shatner covers. The Blues contains 14 songs, most of them featuring big-name artists in accompaniment. In fact, here’s the track listing of all 14 songs, with the featured artists who appear with Shatner on the first 13 tracks: “Sweet Home Chicago” featuring Brad Paisley; “I Can’t Quit You Baby” featuring Kirk Fletcher; “Sunshine Of Your Love” featuring Sonny Landreth; “The Thrill Is Gone” featuring Ritchie Blackmore; ‘Mannish Boy” featuring Ronnie Earl; “Born Under A Bad Sign” featuring Tyler Bryant; “I Put A Spell On You” featuring Pat Travers; “Crossroads” featuring James Burton; “Smokestack Lightnin’” featuring Jeff “Skunk” Baxter; “As The Years Go Passing By” featuring Arthur Adams; “Let’s Work Together” featuring Harvey Mandel and Canned Heat; “Route 66” featuring Steve Cropper; “In Hell I’ll Be in Good Company” featuring Albert Lee; and “Secrets Or Sins” (without a “featured” superstar accompanying Shatner). Sure, I’m not the habit of just listing the tracks in a review, but how better to show the renowned musical talent appearing on this particular disc?

Album-opener “Sweet Home Chicago” quickly catches your ear, if largely due to the easy familiarity with this grand old blues standard. “I Can’t Quit You,” an otherwise mellow groove, is sung with a truly pain-felt wail. And on “Sunshine Of Your Love,” Shatner’s loud-whispered vocals, along with the psychedelic music, help create a sixties vibe; you’ll half-expect Austin Powers to pop in mid-song.

Among other favorites: “Mannish Boy” is reminiscent of what you’d expect in an old school, smoky Chicago blues club. There’s an almost carnival barker-esque flavor – there may be a little old-fashioned Batman villain hiding in there – to Shatner’s enthusiastic delivery of “I Put a Spell On You.” And the chugging-along tempo of “Smokestack Lightnin'” is accompanied interestingly with Shatner’s sobbing-style vocals.

Interestingly – and it’s hard to tell if it’s true or if you just become accustomed to Shatner’s delivery style – the album closes with four relatively mainstream songs, much more so than the first ten. So even if you decide to sample but can’t get into the arthouse beatnik-blues mostly resident early on the disc, at least give the last four tracks a listen. These last four songs are the ones I’d suggest are performed the least uniquely, thought that’s a relative term.

The first of those is “Let’s Work Together.” Shatner’s wails coincide with screaming guitars. His “let’s work together” delivery is commanding. And you’ll find yourself singing along each time he sings the lyrics “every boy, girl, woman, and a man.” This one’s fun, with the most minimal need to appreciate an artistic delivery required.

Next up, Shatner’s spoken delivery is so on-the-mark on “In Hell I’ll Be in Good Company” that I can’t imagine it performed any other way. This song and the preceding “Let’s Work Together” are frequently my two favorites on The Blues. Or at least the two into which I can sink and get comfortable.

Shatner then delivers a fun, light-hearted blues-rockin’ rendition of “Route 66,” supported quite well by the smooth, steady guitar-rich music bed. And finally, the album slows to close with a sparsely-instrumented blues number, guided by a softly sobbing guitar and Shatner’s delivery, as if revealing deep, dark life secrets, appropriately, on “Secrets Or Sins.”

This one-of-a-kind album is a great, irreverently reverent tribute to the blues from Shatner. When I’m in the mood, it’s a real treat to listen to. But most of the collection requires active listening, in much the same way modern art demands active viewing. So when I’m not in the mood, I skip it and listen to something else. And that’s the best way to appreciate this album. If you’re into music that’s really “out there” – or if you can appreciate comfortable old favorites that are performed purposefully this far from the mainstream – give William Shatner’s The Blues a listen. Or maybe two or three. I’m really glad I did.

Need more William Shatner in your life? Try his YouTube page, which is really cool. Or his website, which also lists his personal appearances. And, of course, you can find him on Facebook and Twitter.