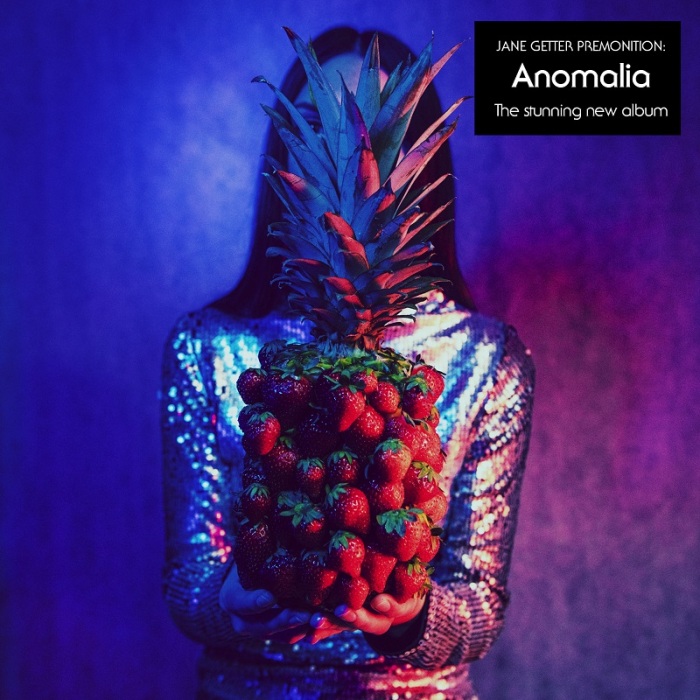 The word “anomalia” refers to something that is “irregular,” “different,” “quirky” even. Those certainly would describe the new album by the Jane Getter Premonition. “Phenomenal,” “outstanding,” and “innovative” are some additional words you could attach to this project as well. Her first release for Britain’s Cherry Red label, Getter has been recording since the late ‘90s. And she’s plied her trade playing guitar with jazz legends like Brother Jack McDuff, Lenny White, Michal Urbaniak, The Allman Brothers’ Jaimoe and the Saturday Night Live band.

Anomalia is a progressive jazz-rock album, to be sure, but it goes well beyond the “chops fest” trap that the idiom can sometimes fall prey to. Getter is as much an astute songwriter as she is an accomplished guitarist. And her vocals that grace a majority of the tracks on this album are soothing, resonant and really get the point across. Also, the JGP are an actual band that consists of regulars Adam Holzman (keyboards), Chad Wackerman (drums), Stu Hamm (bass), and Alex Skolnick (guitar), with additional contributions here from Gene Lake (drums) and Mark Egan (bass).

Running down the track list, “Kryptone” is a rocking opener, with a dark and ominous veneer. It features nice solo tradeoffs between Getter and Skolnick, with Holzman jumping in exuberantly on Jan Hammer-like synth passages.

“Lessons Learned” offers a hopeful message delivered by Getter’s cool mid-range vocals. The chorus states, “Accept your limitations, focus on your innovations. Trust in your abilities, believe and you will be free.” Now that is solid advice anyone can benefit from. It’s a smooth and melodic number, with plenty of room for dynamic shifts and cutting guitar solos. One doesn’t know for sure if there is political commentary at work here, but I wouldn’t doubt it!

“Dissembler” is a powerful piece that could easily be inspired from today’s headlines. This features guest vocalist Randy McStine who sings “You stand there and say you care, but all you do causes despair… You say you are here to serve, but your greed shows way too much nerve… Your greed is so wide we can’t believe. You care only for you and your needs.” Sound like any administration from the recent past that we know? However, no matter your politics, it’s an intense song that is multi-layered and dynamically structured. Guitarist extraordinaire Vernon Reid also guests and shreds like there’s no tomorrow. Everyone on this track seems to play like their life depends on it. Perhaps, maybe that was the vibe they were feeling in the studio that day.

“Alien Refugee” also seems to have a socio-political bent. But it is tempered, with an empathic core at its center. Getter sings with conviction and heart as she depicts the plight of a refugee who has lost her home. They literally have to flee their homeland, and her words offer a personal point of view that put you in the driver’s seat. The chorus says, “She must be strong, and get past this wrong. Try to find a place to belong… to belong.” It’s another track that will give you goose bumps and make you think. Getter further emphasizes her words, with a beautifully crafted legato-type solo over Holzman’s organ and symphonic flourishes.

“Still Here” almost has a lyrical haiku quality to it. Getter sings “Why am I still here? Why can’t I get clear? I thought I knew the way. What led me astray?” It’s a song that seems to deal with self awareness and reflection. Its concept is somewhat simple, yet nebulous and complex — kind of like the music, in that sense!

Guest vocalist Chanda Rule sings lead on the track “Answers.” It’s kind of a folky-fusion blend that offers another take on looking inside and reflecting. There’s some tasty piano here from Holzman and a fine chorus hook that builds to a magnificent finish.

“Queen of Spies” is an instrumental that appropriately could be a soundtrack for a secret agent TV show or picture. It features a lot of jazzy guitar and keyboard comping over a rock-like context. The track builds in intensity and leads to a coda that showcases Wackerman’s percussive acumen.

“Disappear” was co-written, with lyricist Beth Multer. Lyrically, this is probably the most obscure piece on the album. There is a Joni Mitchell/Annette Peacock vibe at work here. “Like a snowflake I taste you on my tongue. Microcosmic refreshment. Pure fleeting symmetry.” It’s intriguingly ethereal and surreal. Getter’s blend of acoustic and electric guitars is especially effective on this one. The leader concludes the album, appropriately, with a solo performance on acoustic guitar.

“Safe House” is quiet and pastoral, with its blend of flamenco-inspired , avant-jazz shadings. Her finger style arpeggios are sweet and truly put the listener at ease.