Last year, Victoria Bailey released her album Jesus, Red Wine & Patsy Cline. “Skid Row” was one of the songs on that album. This acoustic version of “Skid Row,” however, is a standalone single; it does not appear on the album. 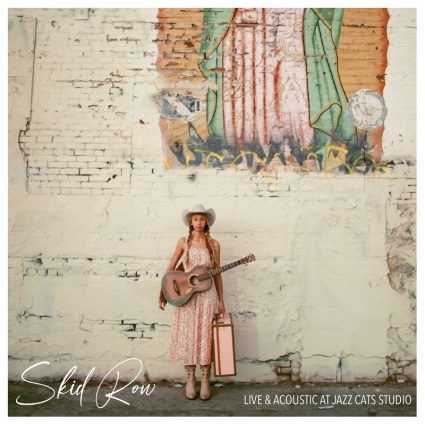 The song is a terrific introduction for those of us who maybe haven’t heard Victoria before. A strong, steady strum provides a firm backdrop for Victoria’s voice. And what a voice! She has an old-fashioned warble but a modern firmness, perfect for bringing an old-fashioned dancehall number like “Skid Row” to modern fans.

Victoria showcases her storytelling skills in the mostly-sung but also-a-little-spoken verses, crooning amiably and memorably in the verses.

I decided to review this song with an uninitiated ear, so I haven’t gone back to check out Jesus, Red Wine & Patsy Cline, but after a couple dozen listens of this track… well, I’m a-gonna! Victoria is a rare memorable voice in a crowded Americana field. Give her a listen. And this acoustic version of “Skid Row” is a great place to start.

You can find Victoria’s upcoming live performances at the “Live” page of her website. There is currently one show listed, OC Music Presents Music on the Runway at Hangar 24 in Irvine, CA, on Saturday, April 3rd. There’s additional detail on the Facebook event listing. Of course, I always suggest calling ahead when heading out during the pandemic because situations can change quickly.

Victoria has done some live-streamed events. The next one I’m aware of is Friday, April 2nd at 6:00 PM PDT (9:00 PM EDT) as part of the “Live and Socially Distanced” series on The Boot’s Facebook page. I’m a little concerned that I can’t find it mentioned anywhere online right now, but keep your eyes open for it.