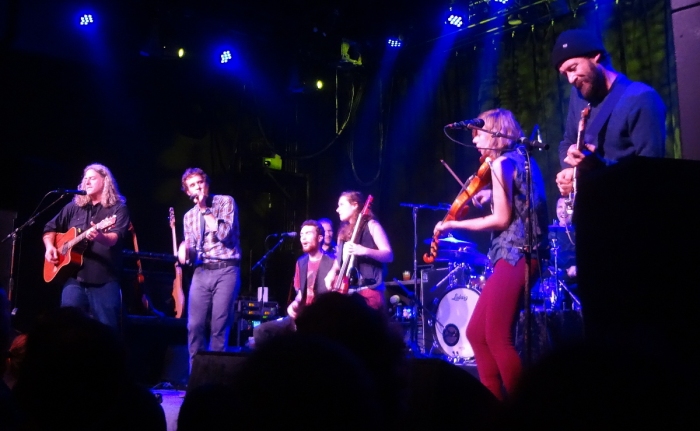 Carbon Leaf and The Accidentals; photo by Geoff Wilbur

The Accidentals and Carbon Leaf

You’ve read Joe Szilvagyi’s review of The Accidentals’ Parking Lot EP here in this Blog. Joe discovered The Accidentals this past summer. Joe and I have vastly different musical tastes; we rarely listen to the same bands. (He’s a terrific judge of talent and a great music reviewer, and I enjoy having him write for me because he’s knowledgeable about styles of music that aren’t my bailiwick, but our personal music collections have very little overlap.) In this case, though, after reading Joe’s review and listening to the band’s recent release, I’ve joined Joe as a fan of The Accidentals’ music. So when I noticed The Accidentals were going to be in the Boston area, I circled the date on my calendar… and then hoped a non-music-related event wouldn’t get in the way.

The Opening Act: The Accidentals

Full of energy and sporting an identifiable sound all their own, genre-busting trio The Accidentals energized a crowd that was mostly discovering them for the first time. If I had to describe The Accidentals’ music, I’d call it a pop-friendly, folk-influenced, classically-progressive, personality-infused blend of catchy songs and impressive musicianship. Combined with an engaging stage presence, this is a group with all the tools for a long, successful career. And there’s even a quirky edge to some of its songs that might lend itself well to independent film soundtracks as an introductory outlet. 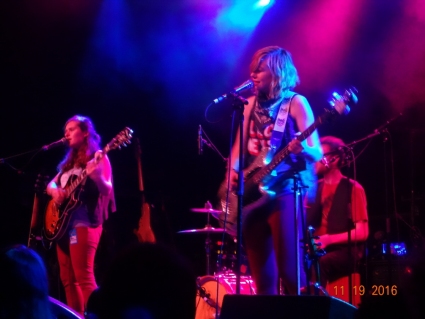 On this particular night, right out of the gate, drummer Michael Dause got things rolling, joined soon by string multi-instrumentalists Katie Larson and Savannah Buist. Savannah and Katie swapped lead instrumental duties throughout the set, while vocally, Savannah’s vocals are a bit quirkier, while Katie’s a bit more straightforward folky-indie-rock. And Michael’s voice maybe a little crisply high when he’s asked to lead. 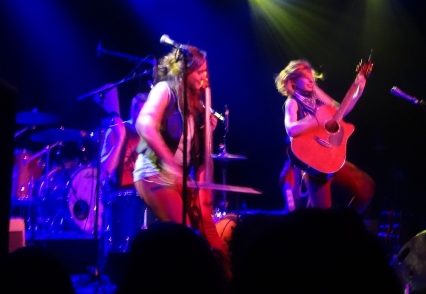 The positive energy from the opening number carried through to the band’s smooth second song, “The Silence,” from the band’s Bittersweet album. (Actually, to be fair, the energy ran throughout the set.)

Next up was a new song, “Stitches and Seams,” an engaging folky alt-rocker featuring Savannah’s quirky vocals atop Katie’s smooth, rich string bed. This was followed by “The Sound a Watch Makes When Enveloped in Cotton,” performed in standard power trio (electric guitar, electric bass, drums) format. Katie shredded on the electric guitar, Savannah rocked the bass throughout (and during the included solo), and Michael augmented his drumming with a brief beat-boxing segment. Altogether, it came across a bit like Johnny Cash… if he was a three-piece, odd alt-rock band. 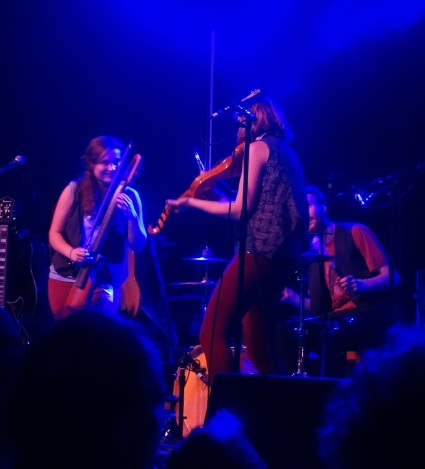 Skipping ahead, Michael was notably the featured vocalist on an exceptionally enjoyable cover of Rush’s “Tom Sawyer.”

The band then closed with a two songs I recognized from the Parking Lot EP. First was “The End,” a catchy, fun, jug-band-worthy knee-slapper that’s tailor-made to showcase the electric fiddle.

The Accidentals closed their set with “Parking Lot,” the band’s super-catchy EP title track that showcased the group’s live performance at its fully animated best, replete with truly frenetic fiddling; it absolutely, most enthusiastically, brought the house down. In fact, after the show, though the audience was there to see its beloved Carbon Leaf, I overheard several conversations about the terrific “opening band.” I’m pretty sure The Accidentals made a big step toward building a small legion of new fans in Boston with their set. 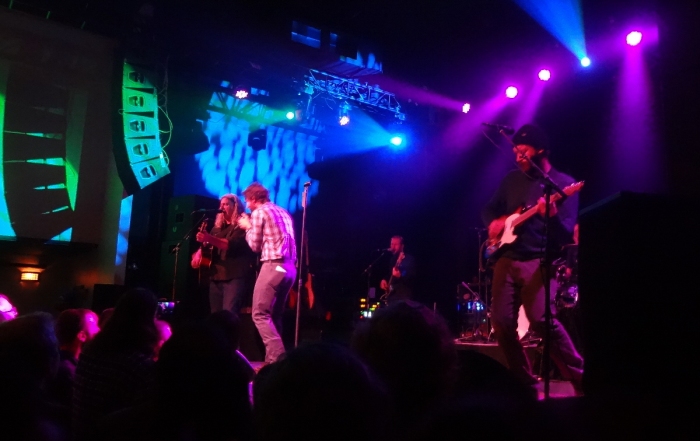 Carbon Leaf has been around a while. Since before the members of The Accidentals were born, in fact. And they’ve built a huge fanbase who turn out to see their performances. A large, packed concert hall full of fans enthusiastically singing along… it felt like the sort of crowd that might follow a band like Phish around at times. The audience spanned generations, combining those who’ve known the band for a couple decades with more recent converts. As Carbon Leaf explained late in the set, this year’s touring was a bit light, and the band approached this show a little differently, playing longtime favorites toward the middle of the set and playing deeper album cuts than might be expected at a typical rock concert.

Carbon Leaf has been said to have Celtic, folk, and even some country influences in its alt-rock style. Indeed, I heard them all throughout the evening.

Later songs churned through Carbon Leaf’s mix of stylistic influences. Many of the catchier songs sport a bit of a slightly-Celtic-influenced Barenaked Ladies alt-rock sound. Just a bit, though, as Carbon Leaf’s music sounds like no one else’s. Or, perhaps, a bit like everyone else’s, as its sound navigates so many styles adeptly.

The first song to get the packed house singing along was “What About Everything,” a poppy alt-rocker with a folk edge. Thus began a string of crowd favorites. In fact, the crowd sang whole segments of “I Don’t Know Where to Begin,” a song quite well-suited for a campfire singalong.

It was followed by the most hoedown, square dance-worthy ditty of the evening, “7 Brides for 7 Sinners.” And then Carbon Leaf’s biggest-ever hit, “Life Less Ordinary,” was delivered with great rocking energy that, naturally, had the entire audience singing along. Both great tunes, and a back-to-back pairing that showcased the broad diversity within the band’s repertoire.

The Accidentals then joined Carbon Leaf on stage for a single song, a rousing rendition of “Let Your Troubles Roll By” that turned into an extended jam among the talented musicians onstage.

The next couple songs showcased significant penny whistle work from vocalist Barry Privett, and another sported some psychedelic blues guitar, while great Irish drinking song-styled “The Donnybrook Affair” really brought out the rowdiest side of the crowd.

The two-song encore that ended this raucous evening began with acoustically psychedelic “November (Makebelieve)” and ended with “I Know the Reason” and its big rockin’ hook, a satisfying end to a fun evening.

The Sinclair gig was The Accidentals’ last night on the road with Carbon Leaf, but each band has some upcoming gigs.

The Accidentals have a (snow) flurry of Michigan shows scheduled during the remainder of 2016. You can catch them in Grosse Point on November 26th, Elk Rapids and Williamsburg on November 27th, Grand Haven on December 2nd, Rockford on December 3rd, and Traverse City on December 16th. For details on these shows, as well as several 2017 shows (including a January west coast swing with Martin Sexton), check the tour page on The Accidentals’ website.