photo by Derek Kouyoumjian; photo courtesy of The Luxury

I first discovered The Luxury‘s music about a year and a half ago when a music industry friend of mine was promoting a show for a different band on Facebook; The Luxury was one of the other acts on the bill, but it’s the band whose music I liked best.  I was able to see The Luxury perform a few songs live when they performed at Church in Boston last summer. 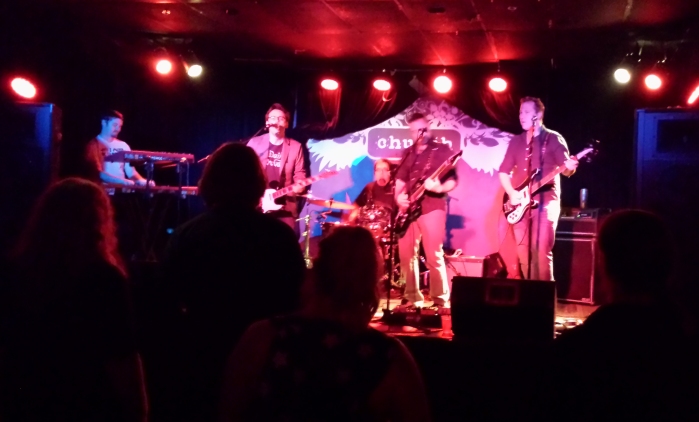 image courtesy of The Luxury

The Luxury has a unique, identifiable sound; that’s usually a prerequisite for becoming one of my favorite bands/artists, one that I’ll go out of my way to share with friends, acquaintances, and anyone who will listen.

photo by Matt Hajdys; photo courtesy of The Luxury

I saw The Luxury in a small club, but its sound is large enough to fill a big theater and would lend itself to U2-esque arena presentation, if the band’s following was large enough and its budget was so inclined. Bones & Beaten Heart, which is meant to be listened to in its entirely, as the songs flow from one to the next, is a journey through this style; it’s as if a mid-tempo melodic rock band’s music has been filtered through a sonic funhouse mirror. And it’s so cool!

Some songs do stand out. The first Luxury song I ever heard, which falls late in the album, was “All I Ever Do Is Win.” It’s filled with lyrical gems like “I never meant to be so misunderstood/You just, you need an enemy to feel this good.” The big distorted guitar sound and “la la” vocals in the chorus are also inspired touches. Here’s a link to “All I Ever Do Is Win” – listen for yourself.

photo by justbill.net; photo courtesy of The Luxury

“In Lieu of Goodbye” is another memorable track. It combines melody, a little techno-inspired keyboard, big harmonies, and thumping rhythm so effectively that it’ll have you singing to yourself “I’m so sorry that I’m not sorry enough” for hours afterwards.

It’s followed by “Ring Around the Ghost,” which has the sort of haunting aura you’d expect from its title, while its verses open with a tunefulness almost catchier than the choruses… OK, catchy in a different way.

“Losing My Time On You” starts with a heavy Beatles influence and overruns it with the occasional vocal wall-of-sound and sixties guitar riff.

photo by Matt Hajdys; photo courtesy of The Luxury

Soaring psychedelic rocker “Sleep Through Summer” is another track with breakout potential. The same is true of sweet, rhythmic pop-rocker “Why Don’t You Cry Anymore (Like You Used To),” which may be what Barenaked Ladies would sound like if they were moderately miffed.

The disc closes with “Nobody With You,” a Beatles-on-psychedelics ditty that’ll leave listeners swaying side-to-side uneasily, though it’s not quite mellow enough to warrant raising lighters in the air.

Overall, Bones & Beaten Heart is a crank-it-up, melodic, distorted, catchy, off-kilter mainstream rock journey. It possesses a unique, identifiable sound that positions The Luxury as top dogs in an otherwise largely unfilled niche in today’s musical landscape. So hop in the car, hit the road, roll down the windows, and blast Bones & Beaten Heart on 11.