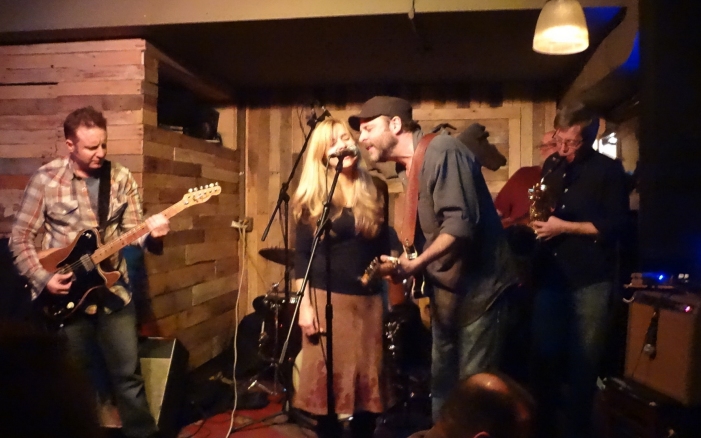 If you haven’t been reading the blog from the beginning, you may have missed it, but I reviewed Danielle Miraglia’s Glory Junkies album as installment #7 of my 9-part “Road Back to Music Journalism” series.

Friday nights are Tim Gearan’s night at Atwood’s Tavern. Each week, he brings in another great band to open for him. Because I hadn’t been out to see Danielle perform live since starting the blog, I had been looking for an opportunity, and this night came with a chance to catch Tim, as well, so it seemed like a perfect choice. 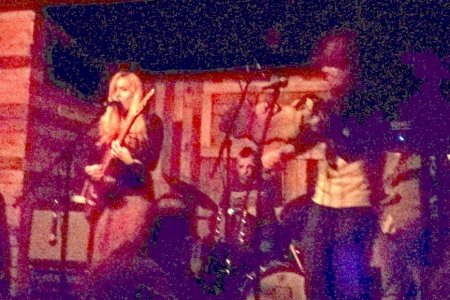 My level of appreciation for Danielle Miraglia’s talent is already well-documented. She can perform solo as an acoustic, almost folky blues singer, and she can perform a raucous, full-on rockin’ blues set with her band, the Glory Junkies. Tonight, of course, was a Glory Junkies night.

The band opened with “See the Light,” a stompin’ blues rock tune from the Box of Troubles CD that featured a nice fiddle solo and showed that Danielle’s tuneful blues growl was in full form tonight; the energy carried well into “Fair Warning.”

Next was “Famous for Nothing,” challenging the rhythm section, who adeptly kept the song under control as the vocals and guitar danced around the melody a bit.

Through the rest of the set, Danielle did her usual amazing job on a Joplin cover, played a fun song off the Glory Junkies disc, grabbed the acoustic guitar for a new song – I didn’t ask for the title, but I’d assume it’s “Don’t Pray For Me” – that’s a real foot-stompin’ blues number with a smirk and a lotta howlin’ soul, and then added a Prince number.

The band closed its set with what’s a bit of a Danielle Miraglia standard, as well it should be, her powerful, force-of-nature rendition of Tom Waits’ “2:19.”

A deafening call for an encore was greeted with one last song, “Pick Up the Gun,” with a little spacy intro, great guitar-picking, vocal power, and significant use of a freaky fiddle sound I had never heard anywhere before this evening. This song, by the way, via a YouTube video of a live, outdoor performance, was one of the first songs I listened to when I was initially checking out Danielle’s music.

Tonight was my introduction to Tim Gearan in a live setting, so I wasn’t sure what to expect, though I had an idea. He and his band are a powerhouse of full-steam-ahead, rollicking blues and blues-rock.

Tim opened his set by asking Danielle Miraglia to join him on vocals for the first two songs, which quickly got the house rocking.

After a couple more straight-ahead rockin’ blues numbers, Tim advanced to some funky blues.  By this point one thing was clear. Well, two things. First, this band could handle just about any variation of the blues with aplomb. Second, there’s so much texture in Tim’s voice, sometimes seeming to have a Southern-sounding bluesy edge to it, that it always contains lots of emotional power.

Or so I thought. The band’s rendition of Tom Waits’ “Clap Hands” combined spacy and psychedelic music with understated vocals. Proving Tim can deliver emotion without the power, when called for. And when the band next turned it down for a slow swayer, there was a hint of Randy Newman in Tim’s vocals.

I’m glad I got a chance to catch the Tim Gearan Band live. The evening ran late, so I couldn’t stay until the end, but I did stay a bit longer than I had planned because I couldn’t tear myself away. Indeed, I don’t get out to catch live music as often as I’d like, but this double-bill was clearly one worth leaving this house for. ‘Cause “my house don’t rock” the way a Danielle Miraglia/Tim Gearan show does.

3 thoughts on “Geoff’s Night Out: Danielle Miraglia and Tim Gearan at Atwood’s Tavern”