A Danielle Miraglia show at the Front Street Concerts summer concert series is an annual tradition. She’s one of Boston’s best. Period. Periodically, Boston’s music award series notice, often when she releases new music, and lately seemingly more consistently, year-to-year, regardless: She has been nominated for Blues Artist of the Year at the Boston Music Awards each of the last two years, and she won Female Performer of the Year at the 2019 New England Music Awards. She’s a consistent draw, seemingly able to draw her legion of fans out to hear her perform even when she plays locally several times a month. Danielle’s live shows with a full band, as Danielle M & the Glory Junkies, are all styles of blues-rock, from in-your-face to soulful and rich, while her solo acoustic shows are more blues-folk, as bluesy songwriting-driven acoustic songs would tend to be. But her music is always performed with an energy, her songs often written with a sincere yet mischievous wink. And it’s a rare treat to get to have such a world-class talent perform frequently in our midst.

Front Street Concerts is a backyard “house concert” series with a dinner buffet, an outstanding way to spend a summer evening, with attendees treated to inspired food selections and always featuring some of the best musicians around, with one slot each summer reserved for Danielle Miraglia. There’s a stage, sound system, and some seats in the barn, while the barn doors are left open, so most attendees choose to outside under the stars (or a tent, depending on the weather) in lawn chairs brought from home. 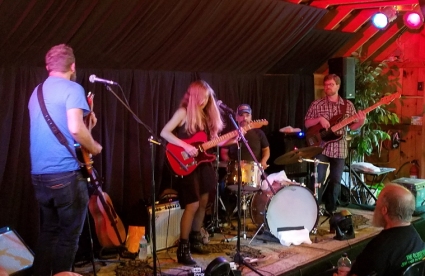 I’ve written about Danielle’s gigs so often (album review, live review, live review, live review, live review, and a long-overdue album review for All My Heroes Are Ghosts currently half-written), I opted this time to simply jot down song titles and deliver a photo-heavy review while enjoying the evening, the surroundings, the company, and the music. This performance was a mostly-Glory-Junkies show – always a treat, as the band members are all among the top local musicians at each of their instruments, often busy elsewhere in the area on non-Glory Junkies nights. With Erik White on guitar, Chris Anzalone on drums, and Jim Larkin on bass, only violist Laurence Scudder was missing for this particular show.

Rather than the usual Front Street format of two short sets with an intermission, this show was one long set, followed by some socializing after the performance. The band opened with the rockin’ “See the Light” from the Box of Troubles CD, followed by cynical, current affairs-driven “Monster” and “All on Fire,” both from the All My Heroes Are Ghosts disc.

Next up was the title track, “All My Heroes Are Ghosts,” followed by the pop culture-skewering “Famous for Nothin'” from Danielle’s Glory Junkies disc, and Janis Joplin’s “Turtle Blues.” Because there has to be a Janis song during a Danielle Miraglia gig; very few people can channel Janis the way she does.

Following was a raucous rendition of “Everybody’s Wrong” and a new original, a real treat for which my notes simply say “soulful, soft, and powerful.” And “Stagger Lee” concluded the original music portion of the evening.

From there, Danielle M and 3/4ths of the Glory Junkies finished the night spinning covers. First up was their rendition of Tom Waits’ “2:19,” a crowd favorite at a Glory Junkies show because they really make it their own. Next up was a cover of “Proud Mary,” a deliverance of Big Mama Thornton’s “Hound Dog,” and a Stones cover to close the evening. (Yes, I forgot to write that one down and was only able to remember “Stones cover” by the time I got home.)

As always, the Danielle Miraglia performance at the Front Street Concert Series was a highlight of the summer. By now, that’s expected. I hope to see a few of you there along with me next summer. And, in the meantime, perhaps at some of Danielle’s other gigs in the Boston area. And beyond, of course, as she performs up and down the east coast.

To that end – that of catching a live performance – check out the “Shows” tab on Danielle’s website. I just missed getting this posted in time to direct you to a few out-of-town gigs; well, OK, most of those were in early October, so I missed most of the shows by a mile, but Danielle did perform on Long Island last night. Don’t worry, she’ll be back. Locally, on Saturday, December 7th, she’ll be performing at The Center for Arts at the Armory in Somerville, MA. Other December shows are: Wednesday, December 11th at The Porch Southern Fare & Juke Joint in Medford, MA; Friday, December 13th at Turtle Swamp Bierhalle in Boston, MA; Sunday, December 15th at Lower Falls House Concerts in Greenfield, MA; and Sunday, December 22nd at Toad in Cambridge. 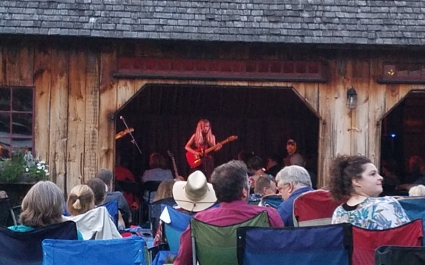 Obviously, more shows will be added, so check back at the website regularly and follow both the Danielle Miraglia and the Danielle M & the Glory Junkies pages on Facebook, as last-minute appearances sometimes pop up.