As I noted when I reviewed Jann’s album Mosaic earlier this year, I first met Jann at the Undercurrents music conference in Cleveland, Ohio back in the late nineties. Interestingly, after years of reviewing his music and meeting him a couple times, this was my first opportunity to see him perform live. This concert was part of a series held in Shrewsbury; sometimes these events are held at the historic Sumner House, but this concert was a bona fide house concert.

First of all, Jann Klose has an amazing voice. And he knows how to use it. Full and rich, emotive at the high and low ends of his broad range. I always have a hard time explaining his “place” on the music spectrum. He is, indeed, a singer-songwriter, and he often wields his acoustic guitar, but I hesitate to use that description because it tends to conjure up folk images. And there’s something much more rock ‘n roll about Jann’s vibe than you’d understand from that description. The most convincing description I’ve come up for Jann is that he’s a rock ‘n roll troubadour. But I’d also suggest you listen to his music and decide for yourself.

A house concert is a terrific venue for a singer like Jann who can fill the room with his voice. And this particular room offered terrific acoustics, as well. Jann opened the evening by sharing a new song with us, “Dear Mel.” It’s as good as his best; it left us already looking forward to what he has in store for his next recording.

He followed that with “Fair Weather,” from the Stereopticon album he released with Gary Lucas earlier this year, and then a couple songs from Reverie that showcased the breadth and sensitivity of his vocals, “Doing Time” and “Mother Said, Father Said.”

He kept the emotional train rolling with his “Wedding Song,” ein Lied auf Deutsch, und mein Deutsch ist nicht gut, so I can only imagine the words were as beautiful as the melody. From crowd reaction, we’re all looking forward to his English translation. That was followed by “Question of the Heart,” a song in which he emits a tuneful vocal howl near the end that conveys well its pain.

Jann closed his first set with a couple songs from Mosaic, the powerful “Rain is Water” and tuneful, melodic, smile-inducing “Four Leaf Clover.”

Set number two began with the energetic, catchy “Make It Better,” a song with the perfect message of inclusion for the world we live in today.

Jann’s next song was an inspired cover of Adele’s “Skyfall.” As perhaps the most rocking of Adele’s hits – and my personal favorite of the diva’s songs – it was well-suited to his interpretation.

Next came “Beautiful One” and “Long Goodbye” from Mosaic and “Clouds” from Reverie. During the second set, the audience was fully engaged throughout, easily encouraged to participate, and some of this middle stretch was audience requests of some of Jann’s most beloved originals.

Jann closed the second set with the Jeff Buckley tune “Song to the Siren,” which also appears on Mosaic. Jann’s connection to Buckley’s music, of course, goes a bit deeper, as he was the singing voice of Jeff Buckley in the 2012 film Greetings From Tim Buckley.

The quickly agreed-to encore consisted of two songs. Or three, actually, as Jann began with a two-song medley of Prince’s “Starfish and Coffee” and “Kiss.” The “Kiss” portion quickly became an enthusiastic singalong. I can’t say I was expecting a Prince cover from Jann, but he continually surprises me with his range, both vocally and stylistically; I should know better by now. Then the evening ended with Jann’s original “Still,” an emotional closing number that left the audience drained but happy.

Of course, as with any good house concert, the fun extended a bit later into the evening, and Jann later reclaimed his guitar for a few impromptu tunes in the kitchen. A thoroughly enjoyable event featuring an exceptional talent. So, tell me again why you don’t yet own at least one Jann Klose album… 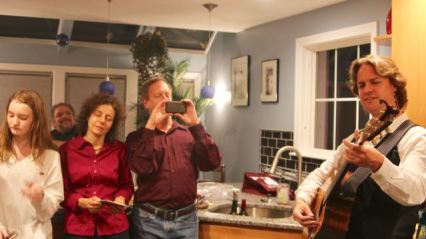 Jann, per his website, will be touring Germany for the first three weeks of November. He returns to the States in December, performing Thursday, December 1st, at The Luna Star Cafe in North Miami, FL; Saturday, December 3rd, at the ACMA Listening Room in Fort Myers, FL; Sunday, December 11th at Cozy Cabin Concerts in Green Brook, NJ; and Saturday, December 17th with Annie Haslam at Sllersville Theater 1894 in Sellersville, PA. Keep an eye on his website for additional dates as they are announced.