Last time I saw Mychael David perform was last summer. (If you recall, I reviewed that show, too.) It turns out he really is as good as I remembered.

This evening’s show in the lounge area of the Hudson House Restaurant and Lounge was in trio format, meaning that Mychael wasn’t performing with his full band. Rather, he was flanked by his exceptionally talented guitarists Pete Early and Howie Swett. Well, technically, Mychael sat on the left, so he wasn’t actually “flanked,” but it was just the three of them.

I caught the band’s first set this evening. They opened with “Nobody Wins,” displaying Mychael’s rich, deep, versatile voice in fine form. It absolutely soared during this song. 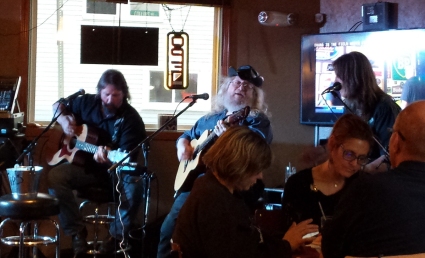 Mychael followed that with “I’m From the Country,” a Tracy Byrd song he performed with a bit more twang and during which he showed off his country growl. Next up was “Folsom Prison Blues, during which Mychael featured the deep, powerful, booming side of his voice.

Mychael continued to mix things up a bit, singing a mid-tempo, mid-range number, Mark Collie’s “Even the Man in the Moon is Crying.” Indeed, he has range, and his voice is warm, rich, and strong throughout that range. It’s always a great pleasure to get to hear Mychael David sing.

After letting Pete handle the vocals on Alan Jackson’s “Chasin’ That Neon Rainbow,” Mychael unveiled a couple of the songs on the band’s upcoming album, to be entitled Heroes and Honkytonks.

First up was “Won’t You Put Your Badge Back On,” a song paying tribute to law enforcement, recalling simpler times, and referencing classic television shows. And, of course, performed impeccably. It was followed by “The Dog Don’t Know Sit,” an old-fashioned country-tempo strummer; a fun number, obviously (as if the title didn’t give that away). 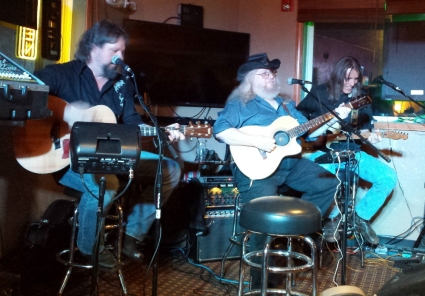 Mychael then returned to covers, with “Good Hearted Woman” up next, just confirming that, with the detail in richness in Mychael’s voice, he can sing anything country. And beyond, apparently, as the band closed its set with a rousing rendition of Bob Seger’s “Night Moves,” a version that included an impressively stretched-out “waiting on the thunder” wail.

Always a pleasure catching a Mychael David show and hearing him breeze through a broad range of country music sub-genres, all with a bit of a classic country tilt. And he surrounds himself with exceptional musicians, as Pete and Howie’s guitar playing occasionally stole the show from Mychael’s voice– no easy feat.