A series of scheduling conflicts have kept me from getting to The Backyard earlier this year. But this late addition to the calendar provided an opportunity to get to one of my favorite local live music spaces at least once during 2017. 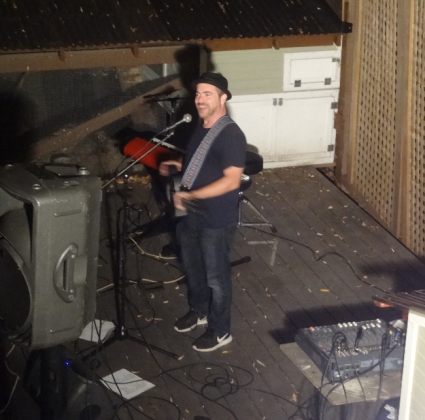 Meanwhile, I had thought to catch Eric Schwartz at his Fox Run House Concerts show on November 25th this year at another very cool local house concert performance space. But this Backyard show allowed me to see Eric perform live while resolving a potential Thanksgiving weekend schedule conflict. Win-win.

Eric Schwartz, if you’re not familiar with him, is one of America’s preeminent comedy singer-songwriters; I’ve seen him referred to as “folk,” but that is a bit of a misnomer, as his style incorporates a variety of musical influences crossing various singer-songwriter subcategories. Perhaps the one song that gained the most notoriety was one of Eric’s political ditties, his 2008 International Songwriting Competition winning song, “Clinton Got a BJ.” (NSFW word tweaked to avoid search engine wrath.) More recently, his social commentary jam “I Gotta Problem With That” has drawn some attention, but my personal favorite Eric Schwartz tune – the one that made it onto my smartphone playlist – is the hilarious screenplay-in-a-song “Don’t Tell My Wife.” 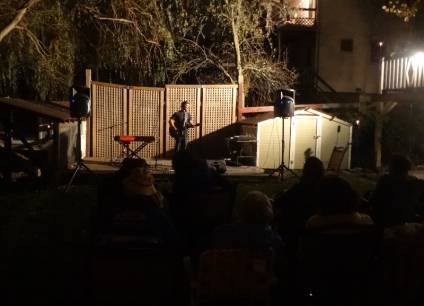 I wasn’t quite sure what to expect from an Eric Schwartz live performance, since this was my first time seeing him in person, but this guy’s one of the best at what he does – and, as I always say, it’s always worthwhile to see musicians who excel in any lane of the 50-lane superhighway that is their craft – so I jumped at the chance.

It’s sometimes hard to tell where Eric’s musical and comedic noodling turns into a song and when it’s merely noodling – though a perusal of his ReverbNation page and a scan of the song titles on his albums may help figure out where to draw the lines. Regardless, Eric performed about 15 songs on this particular evening. Or 18. Your call. It was a chilly evening in Brighton, but thanks to some unseasonable warmth, still a decent night for a live show.

Eric’s first song of the evening was an R-rated comedic female-hygiene-related adaption of “Saving All My Love For You,” setting the bar at its clearly-not-for-children adultest right from the start. Next up was my personal favorite, “Don’t Tell My Wife,” rather Hee Haw-ish in its delivery at times, just like on the recording. ‘Til now, though, I had no idea it was actually based on a true story. “Don’t Ask” followed, a bluesy soul-like word salad sporting significant rhythmic vocal scatting.

Eric followed that with his most political song of the evening, “He Won,” a tale of the last presidential election as seen through the eyes of an unhappy deity, delivered devilishly in a dark, smoky narrative vocal style; perhaps I’ve said too much.

Any political conservatives who couldn’t find humor in the prior track, though, hopefully returned from their bathroom breaks in time for the next number, Eric’s voyage through a seemingly random collection of rhyming words that he tied together at the end… quite cleverly. You’ll know it when you hear it. And he followed that up with the frighteningly unhygienic “Telltale Kitchen.”

Following some hilariously demented children’s music and some more comedy noodling, Eric moved on to his uber, ultra, meta-country song, “There’s a Picture.” (Do I need to warn you not to click through on this link if you’re at work? Really, with Eric’s songs, it’s always a risk.)

Politics returned with “I’ve Got a Problem With That,” followed by Eric’s Gospel song, “The Better Man,” a song of forgiveness… of oneself.

With that, in spite of a supposed zero percent chance of rain (when I checked my weather app earlier in the day), drops of water fell from the sky, so the show moved indoors for the final two songs. First up, Eric swung through his catchy, hooky ode to lesbian trailblazers, “Hattie and Mattie.” And then he closed the evening with “Hallelujah,” a brilliantly NSFW re-imagining of the tune and its cliched use by vocally-talented would-be troubadours to melt women’s… um… let’s just say “it’s ability to attract women” and leave it at that.

Eric plans to take some time off from touring soon, so catch him now if you can. At least, jump at the chance if you’d enjoy a fun, lighthearted evening of clever, imaginative, occasionally political, and often highly inappropriate (adult?) musical comedy. I can’t say it too often: This dude’s one of the best at what he does.

West coast-based Eric Schwartz has a few more gigs in the northeast over the next month, with dates scheduled on Saturday, November 25th in Sudbury, MA; Saturday, December 2nd in Oswego, NY; and Sunday, December 3rd in Oxford, NY. See the “Shows” page of Eric’s website for additional information and to see upcoming live dates whenever they’re added.

It’s worth repeating, and I’m serious here: Do not sample Eric’s music while at work. Wait until you get home, lock the doors, turn out the lights, and for heaven’s sake, use protection… I mean, headphones.

One thought on “Live Review: Eric Schwartz at The Backyard”